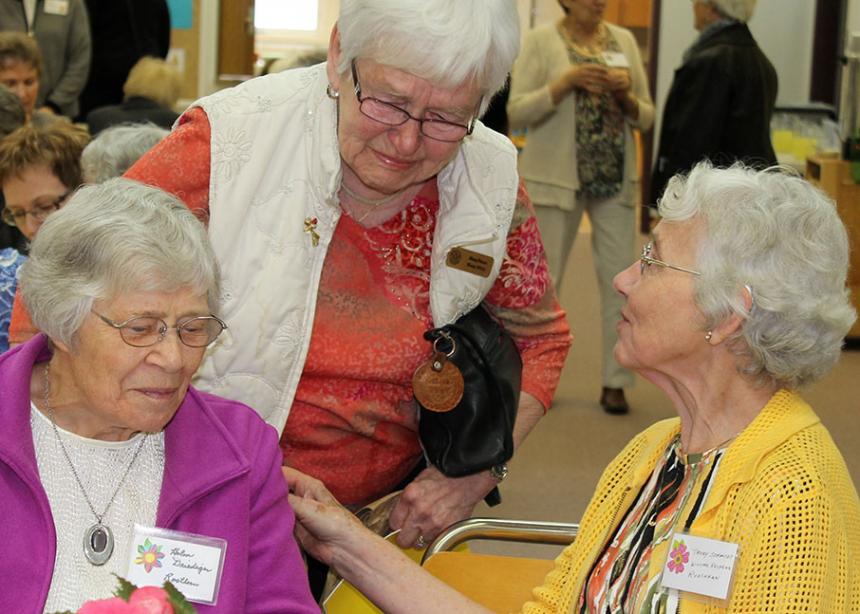 <p>Seniors often take on the responsibility of caring for their peers.</p>

It would appear that 65 is the new 40 across Mennonite Church Canada. As Canadians continue to be active into their 60s, 70s and even 80s, so, too, are Mennonites remaining active in their churches well into their senior years.

Whether this is by choice or by default depends on a number of factors, including the demographic of the congregation, opportunities available to older members, and the health and attitudes of individuals. But the situation also raises questions for many seniors. What will happen to the church when their generation can no longer carry on? Will the institutions and structures they have cared for continue to exist? Will the next generations have faith, and, if so, how will they express it?

Doing what they have always done

Many seniors are as involved in church life now as they always have been, and in most congregations this is encouraged.

Pastor Gordon Allaby of Osler Mennonite Church in Saskatchewan says, “We try not to empower the notion that there is ‘retirement’ in serving God.” In his congregation, he says those who are able “participate in ministries much as they did before becoming ‘seniors.’”

In many congregations, seniors are involved in leadership, serving as lay speakers, worship leaders or musicians on Sunday mornings, and committee or council members during the week. They are deacons or elders, and they are Sunday school teachers to both children and adults.

Seniors are also involved in service. Within the church, they serve as ushers or greeters, prepare food for congregational meals, stitch comforters for relief and participate in fundraising activities. In the community, they volunteer at breakfast programs and thrift stores, visit those in hospital or in prison, and work at homeless shelters and soup kitchens.

Not only do seniors give of their time, they also give of their money. Mary Dyck, a retired hospital chaplain attending Fort Garry Mennonite Fellowship in Winnipeg, identifies seniors as “major contributors to the budget” in her church, while Dan Graber, pastor of Grace Mennonite Church in Regina and area church minister for Mennonite Church Alberta, says seniors are “good tithers.” One senior suggests that tithing was a discipline her generation grew up with, and that those of the younger generation, while generous, seem more project-oriented in their giving.

Seniors give to the church in the area of relationships as well. For some, this means caring for their peers. Waldo Neufeld, retired Mennonite Central Committee (MCC) Canada director, says his peers at Emmanuel Mennonite Church in Abbotsford, B.C., are engaged in fellowship groups and “these groups have taken on the challenge of looking after one another.”

Graber sees this happening in his congregation among seniors who have coffee together, saying they “go out of their way to include those less able to drive [or] get out of the house.”

Such gatherings happen at Foothills Mennonite Church in Calgary, too. “For those of us who have lost our life partners, such gatherings are of special value,” Erwin Strempler says.

Relationships are also built intergenerationally in many congregations. Eleanor Epp-Stobbe, pastor at Erb Street Mennonite Church in Waterloo, Ont., cites her church’s prayer-partner program as an example. Seniors are asked to pray for the students of a Sunday school class. They send notes or cards to the class and the students, in return, visit the seniors in their homes twice a year. It is a relationship that “means a lot both ways,” says Epp-Stobbe.

Some congregations have regular game nights at which youth and seniors interact. Other churches have mentorship programs in which seniors may be part of an intentional relationship with a young person.

Mentorship also happens informally in congregations when younger adults assume areas of responsibility vacated by experienced seniors. Margaret Ewen Peters, who pastors at both Herschel and Fiske Mennonite congregations in Saskatchewan, sees this taking place in her congregations. Epp-Stobbe says her church also “values an intergenerational committee structure because it allows for some mentoring to happen as younger members come on board.”

Graber sees seniors as “cheerleaders” to younger generations, and Fred Unruh of Lethbridge Mennonite Church agrees. “When young friends share in the dynamics of congregational life,” he says. “We cheer and clap our hands because we see our dreams taking shape.”

Being a cheerleader may mean seniors supporting youth fundraising activities with their presence and their dollars, or it may come down to being an encourager. Strempler says he knows of seniors at Foothills “who make it their personal duty to look in on our pastor for a time of talking and encouragement.”

Some seniors find it hard to speak out

Many congregations recognize the value of having seniors in their midst. Churches that have undertaken building projects or difficult conversations have come to appreciate the wisdom and experience seniors bring to the table. This is true for Toronto United Mennonite Church. When this congregation enters a process of discernment, says pastor Marilyn Zehr, it “seeks to hear from everyone in the congregation, across the age spectrum.” Of their senior members, she says, “we know that their voice matters.”

Not all congregations may be good at telling seniors their voice matters, however. Edward Cornelsen of Winnipeg’s Sterling Mennonite Fellowship suggests, “We don’t hear from seniors often. Acknowledging them is huge. Maybe it doesn’t happen often enough.”

Foothills Mennonite Church’s Kate Janzen counters this by saying, “I know not all of our seniors feel valued or get involved, but it is not due to lack of opportunities.”

And Peter Peters of Charleswood Mennonite Church in Winnipeg believes the onus is on seniors to share their wisdom and experience. “We need to be more aggressive in challenging the church with regard to difficult issues,” he says.

But speaking out can be intimidating, according to Cornelsen. “If we [seniors] aren’t comfortable [with an issue], we may find it easier to be quiet, to leave it alone,” he says. In part, he says this is because “they are not well versed and don’t have the language to talk about” certain issues, and the homework needed to become well versed is overwhelming.

Changes facing the church can seem overwhelming, too. Alma Bartel of Bethel Mennonite Church in Langley, B.C., laments the decline in Sunday school attendance and the move away from using denominational publications. Some seniors grieve the loss of the music they hold dear.

Gary Harder, former pastor of Toronto United Mennonite says, “Many seniors feel disenfranchised by the wholesale movement to another style of music in worship,” but he suggests “music is just one symbol of a much larger piece.”

Neufeld concurs, observing that many churches are moving away from Anabaptism, with its emphasis on the body of believers, toward a “more personal, vertical faith,” and that this shift is reflected in the music. He cites former Canadian Mennonite Bible College music professor George Wiebe, who said, “We become what we sing.”

In some congregations the challenge to hang onto Anabaptist tenets comes from worshipping with believers of other backgrounds. Charleswood Mennonite works at integrating Korean believers into its fold. Peters sees similarities between this cross-cultural experience and that of Mennonite churches switching from German to English.

Guenther and Ruth Toews attend Holyrood Mennonite Church in Edmonton, where about 35 percent of regular congregants are African Pentecostals. Learning to understand another culture and appreciate another worship style have challenged original Holyrood members and African newcomers alike.

Even small rural churches experience such challenges. Vern Retzlaff notes that Aberdeen Mennonite Church in Saskatchewan has welcomed people from other denominations as their churches have closed. He, too, feels the need to cling to Anabaptism and notes with some surprise that the members most adamant about this are former Anglicans.

Many seniors are also noticing a shift away from the organized, structured church they have known, and they wonder what the future will hold. Marianne Mellinger attends Waterloo-Kitchener United Mennonite Church and is the spirituality and aging program coordinator at the RBJ Schlegel-UW Research Institute for Aging in Waterloo, Ont. She suggests, “The programmatic church is not sustainable because church is no longer the centre of people’s social life.”

But Cornelsen says, “We don’t know how to move from program to being a people.”

While seniors may lament these changes, they recognize that the next generations must make the faith their own. In her experience, Dyck says seniors are gracious and open to change, perhaps more so than members in their middle years. Ewen Peters also sees the seniors in her congregations accepting change with grace.

Of deeper concern is the absence of a younger generation. Some congregations, such as Emmanuel and Holyrood, have experienced an exodus of members in the 35- to 40-year-old category. Some have moved to other churches, says Neufeld, “but most just quit attending.”

Herman Wiebe, pastor of Zion Mennonite Church in Swift Current, Sask., recognizes that the seniors in his congregation are deeply committed to the church, but says, “that kind of commitment is not present in the next generation.”

Graber echoes this concern, noting “an undercurrent of grief that seldom is openly expressed in [their] children’s and grandchildren’s lack of spiritual commitment to the church.”

Today’s seniors have shown themselves to be a tenacious generation. Many will simply continue to serve as long and as well as they are able. Their goal, as Peter Peters so aptly puts it, is “to share the love of Jesus in a meaningful way,” something the Bible doesn’t put an age limit on. 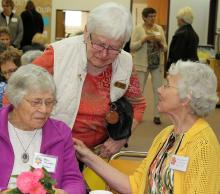 Seniors often take on the responsibility of caring for their peers. 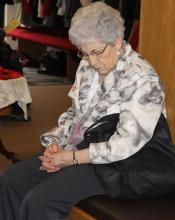 Seniors are often pillars of prayer in their churches. 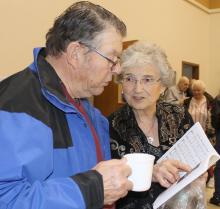 Seniors may lament the loss of the music they hold dear.

Well written and Donna has a broad selection of references across Canada for her quotes. I have seen this happen in other churches and believe if it were not for the seniors we would be hard done by to get all the work done that a church, who administers to her people, needs to do. I say YES there is a place for seniors and more work to be done then they can necessarily handle.