Forming individuals and congregations through tending the soul 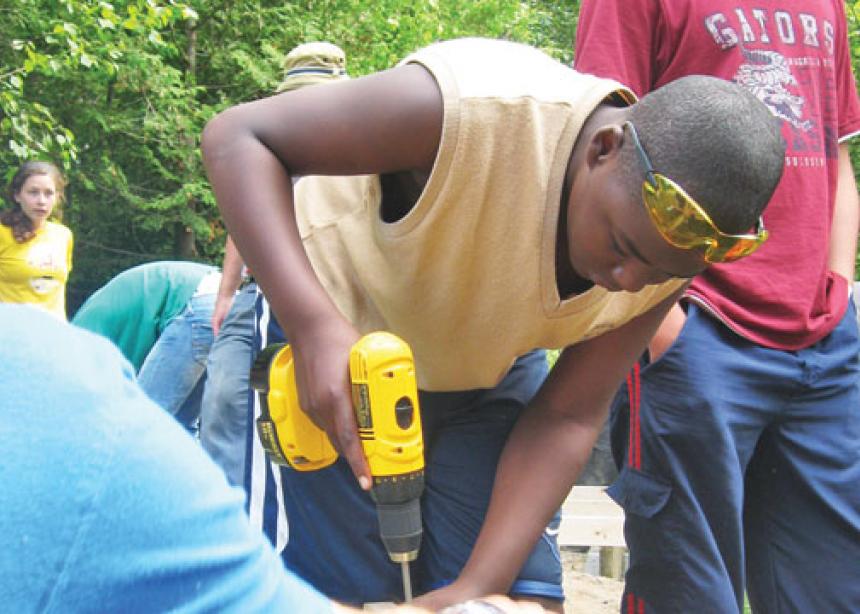 God is a living God who encounters us in our daily lives.” So said Arnold Snyder, professor of history at Conrad Grebel University College, Waterloo, Ont., during a Reformation Sunday sermon last fall at Wilmot Mennonite Church, New Hamburg. Then in his lunch-hour lectures at Grebel earlier this year, he acknowledged that he was going to repeat this idea of Anabaptist spirituality being grounded in an encounter with the living God until the participants were sick of it. (See story on page 9.)

While author David Augsburger wrote in Dissident Discipleship that spirituality “has become comfortingly vague and is usefully vacant, allowing people to insert and then extract meanings virtually at will,” I am using the term “Mennonite-Christian spirituality” to mean “a life of ongoing encounter with the God we experience in Jesus Christ.”

Dawn Ruth Nelson’s thesis in A Mennonite Woman is that such a spirituality was implicit in the community life of Mennonites until about two generations ago. Since then, the spirituality itself has been eroded in tandem with the erosion of the community. Mennonites living in urban settings, or away from their communities on mission and service assignments, have found that they had little to support them in living a life of encounter with God.

Scott Brubaker-Zehr, pastor at Rockway Mennonite Church, Kitchener, concurs with Ruth Nelson. When he and his wife Mary were on a mission assignment in Colombia from 1990-94, he found his spirituality severely tested, “feeling overwhelmed by social issues and the struggles there, and as a young seminary grad feeling like I didn’t have a deep well to draw from. I came home realizing that if I’m going to continue in ministry, I need a deeper well.”

Pastor Steve Drudge of Steinmann Mennonite Church, Baden, scoffs at the idea that this only applies to urbanites. He believes that Ruth Nelson’s thesis applies to rural congregants as well, saying that his members are also no longer immersed in a tight-knit community.

Frank Tillapaugh wrote in Unleashing the Church in the 1980s that the United States was made up of urban and “rurban” people. Rural people try to do all the things that urban people do, they just have to drive further.

Miriam Frey, a Mennonite spiritual director and educator in Waterloo, tells the story of growing up in the Markham-Waterloo Mennonite group where she “caught” theology, Bible and spiritual practice in the church. When she left there to pursue education, employment and service opportunities, she found that she was not being supported enough by what she received in congregations. She found the people in the more “liberal” congregations did not have the same grounding in Bible, theology and community practice that she had.

Gord Alton, a member of the pastoral team at Erb St. Mennonite Church, Waterloo, and a spiritual director, wants people “to experience God’s transforming love.” When a course in spiritual devotions taught by Arthur Boers was offered by Mennonite Church Eastern Canada in the 1990s he found support for his burgeoning ministry. Exposed to spiritual disciplines such as centring prayer, and to writers like Gerald May, who combines spirituality and psychology, he found support to pastor, guide others and to work with people with AIDS as a community chaplain.

In that work his very first client, a woman, asked him, “Teach me how to pray.”

“That was something I hadn’t been taught in seminary,” he admitted. “She was really looking for a way to connect with God and for me to lead the way. That visit really triggered that I needed to get some training in spiritual direction.”

Sue Steiner, a spiritual director, retired pastor and consultant with Associates Resourcing the Church, who works at “tending the soul” of congregations, tells of being a young pastor and that when the senior minister left she “lost my cover or protection as a woman pastor and realized that the next step for me was to go deeper and pay attention to my core spirituality.”

Through a friend, she found a retired female Anglican priest to be her spiritual director. This helped her to “go deeper for myself, deeper for the congregation.” She found contemplative spirituality was right for her personality, a spirituality unknown in the Mennonite church.

What ‘spiritual type’ are you?

Each of these church leaders has found food for their souls in the contemplative traditions that have come down through the Catholic and Anglican traditions. Arnold Snyder contends that much of this was practised by 16th-century Anabaptists and connects well with what is seen as appropriate spirituality in an Anabaptist Christian church. He gives the example of centring prayer as an act of gelassenheit or yieldedness to God, a key component of both 16th- and 21st-century Anabaptism.

But Corinne Ware, in her book Discover Your Spiritual Type, notes that contemplative practice is only one of the four main ways of being spiritual in a Christian way. The others—head, heart and kingdom spiritualities—are also represented in congregations:

Contemplative or mystical spirituality cares about listening to God in silence, and drawing near to God in nature, solitude, Scripture and music, such as that from the Taizé or Iona communities in France and Scotland. It is a reflective spirituality without clear images of God.

Jan Steckley, pastor of Hillcrest Mennonite Church, New Hamburg, is aware of these varying needs and expressions of spirituality, and works to provide opportunities in worship and Christian practice for all of them.

But, says Steiner, the other three spiritual types would benefit from reflection in the contemplative type.

Alton notes that to be healthy followers of God, it is essential for Christians to spend time reflecting on what is going on in their bodies and emotions, no matter which spirituality they favour.

At MC Eastern Canada’s annual Pastors, Chaplains and Congregational Leaders seminar, Arnold Neufeld-Fast focused on Augsburger’s tri-polar spirituality, encompassing the individual, God and the community of humanity. In Augsburger’s opening chapter, he repeatedly negates any usefulness in the mono- and bi-polar spiritualities he sees in general society and other denominations, and trumpets the Anabaptist focus on being individuals, in relationship to God, in the community.

Frey responds to him, noting that many of her directees have not found the church to be a place that supports or nurtures them spiritually, and so they have sought support elsewhere. And the point could be made that seeing a spiritual director already brings a community component into the equation.

There are great strengths in a spirituality that is not only about “me” or “me and God.” Don S. Browning, in The Moral Context of Pastoral Care, writes that psychologies that focus on the health of the individual often fail to consider what happens when the health needs of two individuals conflict, failing to see the individual in the context of family, society and culture. This is what Augsburger is after: seeing spiritual health as the individual, in a relationship with God, in relationship with humanity, in particular the faith community.

Steckley also works in tending her congregation’s soul, helping it to ask together questions that sound missional: “Where is God at work already? How do we join God in that work? Where are we experiencing God in our gatherings and work?” She says that people have noticed that congregational meetings at Hillcrest have a different feel to them, that such questions are becoming natural to them as they worship, work and serve together.

Steckley, with others from MC Eastern Canada, attended three summers at Eastern Mennonite Seminary, Harrisonburg, Va., under Wendy Miller, professor of spiritual formation, learning about personal spirituality, spiritual direction and tending a congregation’s soul. She is now one of the leaders in MC Eastern Canada’s two-year Tending the Soul program, whose goal is “cultivating awareness of the presence and activity of God in our daily lives and in our congregations.” Participants are asked to commit to the regular practice of spiritual disciplines and in return receive spiritual direction, do assigned readings, and work in small and large groups to gain competence in the field.

Soul-tending is not about dealing with problems, but about growing a language and practice of thinking about life as individuals and as a congregation as an organic whole, rooted in God.

Steckley says that her hope is for her congregation, and others, to be “formed as God’s people for the salvation of the world.” To do this, they try to see what God is blessing and do that, rather than ask God to bless what they are doing. This is a move from intercessory type prayer to the practice of the presence of God, like that of Brother Lawrence, the mediaeval mystic.

Other ways of renewing spirituality

There are also other ways of approaching the need for a renewed spirituality to support the individual and fuel a congregation’s life.

Community Mennonite Church in Drayton, north of Waterloo, used Henry and Richard Blackaby’s Experiencing God: Knowing and Doing the Will of God. From a more evangelical spirituality, this book is connected to curriculum for the whole congregation. All Sunday school classes studied the material while worship and preaching focused on the same material last fall.

Pastor Dave Tiessen has found great excitement in the congregation, as people renew their commitment to follow God and seek God’s desires for the congregation. Congregational leaders like Paul and Darlene Wideman note that the material calls for both an individual and a corporate spirituality rooted in desires to be obedient to God. They sense hope in the congregation as they realize that they are working together with God on God’s goals.

Common to the contemplative approach and this more heartfelt spirituality approach are the mix of individual and corporate, and submission to God and what God is already doing in the world.

Back to the future

Congregations where such explicit work is taking place are often vibrant, busy, multi-generational communities that are impacting themselves, their area church and the communities around them. They are led by pastors who are paying attention to their own relationships with God and are calling on all the members of their congregations to do the same.

Much like the 16th-century Anabaptists who were critical of spirituality reserved for religious leaders alone, this is a spirituality and spiritual formation that believes God can be encountered by all, trusts that God will encounter, and calls on people to make room for God to encounter them.