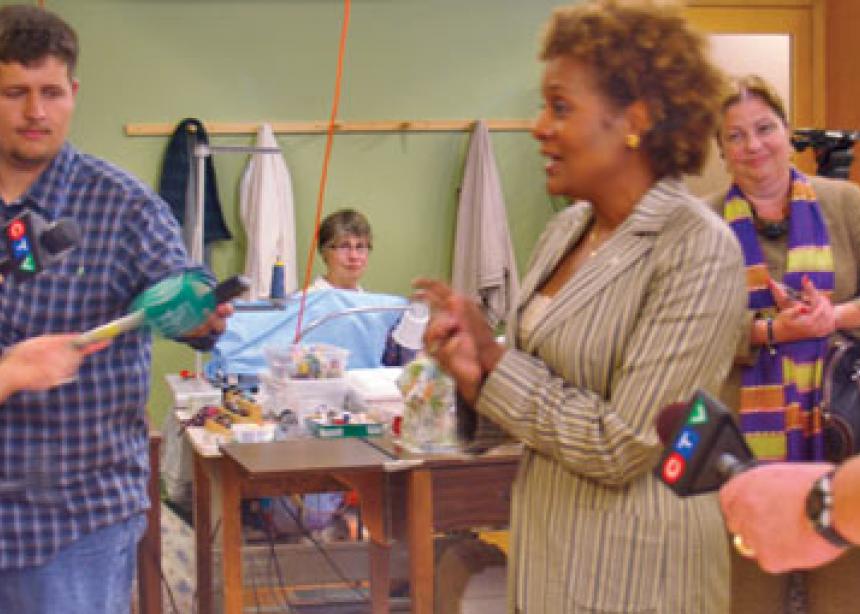 Work at the Mennonite Central Committee (MCC) Ontario office and warehouse in Kitchener came to a halt on June 14, when Michaëlle Jean, the Governor-General of Canada, dropped in for a visit. As well as meeting some Mennonites over lunch, she visited the warehouse, where she tied a few knots in a comforter, helped pack a relief kit for Haiti, and accepted the gift of a comforter from Margaret Nally, chair of the MCC Ontario board.

“Thank you for what you are doing,” Jean said, referring to the material aid that is being sent to Haiti, where she was born. “It makes a world of difference.”

As she sat at the comforter she commented on the value of blankets for people who have lost everything. While placing items into the relief bucket she remarked that for those who have nothing, soap and other toiletry items are very important to maintain their dignity.

Rick Cober Bauman, executive director of MCC Ontario, was impressed by the appreciation the Governor-General expressed for the work Mennonites have been doing for those impacted by disasters and for refugees. “She was eloquent,” said Bauman of her comments as she compared her own experience of fleeing the violence of Haiti and the work that MCC does in organizing refugee sponsorships. He felt she truly understood what MCC is trying to do.

In order to show the diversity of the Mennonite spectrum, and how the private sponsorship program has impacted the Mennonite church, a few representatives from local congregations had the opportunity to tell part of their story at lunch. Arlene Kehl from First Mennonite Church, Kitchener, explained how Hmong refugees used First’s church facilities when they first organized as a congregation. Bouavash Her from First Hmong Mennonite Church spoke about their appreciation for the refugee sponsorship program and how they have opened their church on Sunday afternoons for the Burmese Chin Church, a more recent group of immigrants to Canada. Noe Gonzalia, Hispanic pastor at First Mennonite, also spoke about the experience of refugees from Central and South America.

Among the other MCC Ontario board members who shared lunch with the Governor-General were representatives from the Old Colony and Old Order Mennonites, as well as Leah Reesor, who was able to pray the table grace in Kreyòl, the language of Haiti.

Josh Steckley, a recent MCC worker in Haiti, had a few minutes to describe the work there. “I began with a Kreyòl proverb, and she got it right away!” Steckley said.