‘Each day was a joy’ 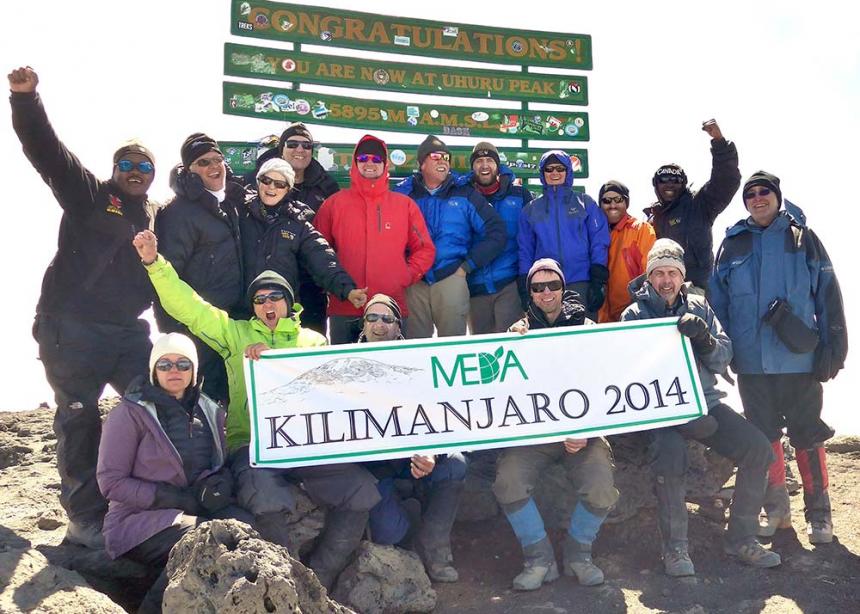 Team members of the MEDA Mount Kilimanjaro fundraising climb celebrate as they reach the summit on July 14 after beginning that morning at 5 a.m., which required wearing headlamps to see. (Photo: Duane Eby)

After 27 years with Mennonite Economic Development Associates (MEDA), the last 12 as president and chief executive officer, Allan Sauder of Waterloo felt that he needed a professional development leave to both freshen his energies and to give him a new perspective on his work.

The thought had barely crystalized when he received a call from Doug Wagner, a former MEDA director, who had just finished a fundraising climb of Mount Kilimanjaro in Tanzania, encouraging Sauder to do the same. Sauder saw the possibilities in mid-life to lose some weight, get more fit, visit sites where he and his wife had worked at the beginning of his MEDA employment in Tanzania, gain support for MEDA projects and build new relationships with potential MEDA participants in the climbing community.

He spent months conditioning with 8.5-kilometre round-trip walks to work, a personal trainer, climbing in the Rockies and Adirondacks, hiking the Bruce Trail and cycling with his wife Donna.

As he and the team of 15 other climbers prepared to begin their ascent, they had reached Sauder’s admittedly “very ambitious” goal of $250,000. Thanks to his Blackberry, high on the mountain he knew the final total was $276,000. Funds are going to new project development, according to Sauder, always the most difficult area for which to raise support.

Assisted by a crew of 64 employed by Tusker Trail, which took care of all the details, the team took seven-and-a-half days to go up Kilimanjaro and two-and-a-half to come back down, with the peak day taking 11 hours to and from camp. Interestingly, the banner they unfurled at the summit had been a last-minute thought and MEDA paid a professional to bring it up. It took him only a day-and-a-half!

The hardest part for Sauder was psychological. He didn’t sleep well in the thin air, in the early dark and cold. He wondered if he would make it or whether he’d fail before many supporters all over the world. But all of the climbers made it to one of the two points considered Kilimanjaro’s peak. (The crater wall has higher and lower points, and some climbers with altitude problems made it to a lower point while the majority made it to the higher point.)

“Each day was a joy,” Sauder says, although the peak gave him a particular sense of accomplishment at nearly 5,900 metres. But an ongoing joy through the whole process was the support both on the team of climbers and the many people all over the world who sent words of encouragement during their climb. It was also great to see many former co-workers with whom he had laboured 27 years ago who were still doing significant work both locally and all over Africa.

All of the climbers paid their own expenses. The way Sauder sees it, they would have spent the money on holidays somewhere anyway. The bonus result of this holiday—or leave—was that MEDA’s work has nearly $300,000 worth of support that it wouldn’t have otherwise had. 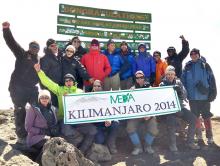 Team members of the MEDA Mount Kilimanjaro fundraising climb celebrate as they reach the summit on July 14 after beginning that morning at 5 a.m., which required wearing headlamps to see. (Photo: Duane Eby) 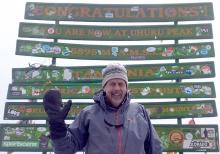 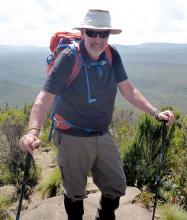 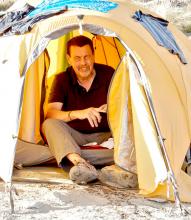 Way to go Allan and your Team

I really appreciate your dedication and positiveness in

your leadership with to the work of MEDA.

Keep up the good work and keep "climbing" into new area