Dora and the Prince of Peace

Believe it or not, these cartoon characters offer several lessons that can rejuvenate us as followers of Jesus Christ, the Prince of Peace 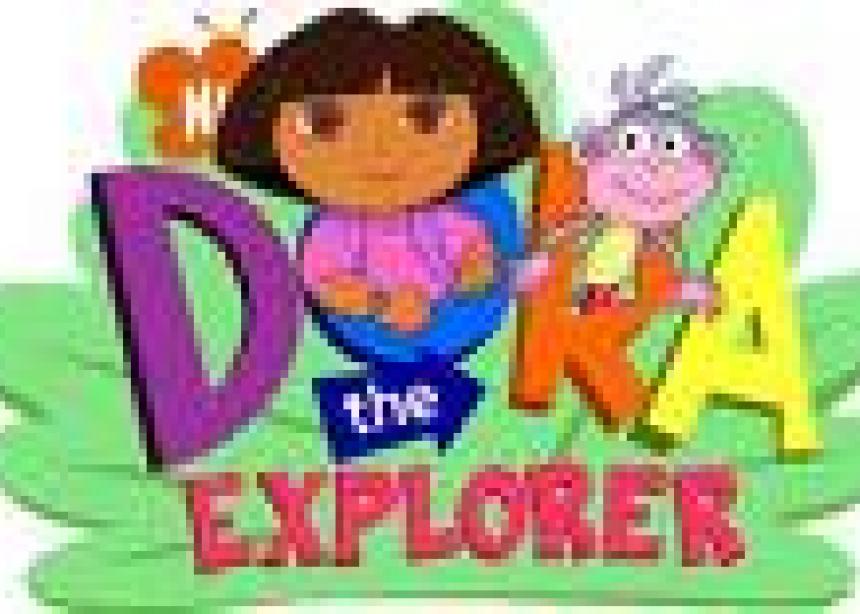 Welcome to the animated world of Dora, Boots, Diego, Baby Jaguar, and Swiper the Fox – just a few of the characters who inhabit the wildly popular books, television shows, and video games churned out by the makers of “Dora the Explorer.” Believe it or not, these cartoon characters offer several lessons that can rejuvenate us as followers of Jesus Christ, the Prince of Peace.

Dora is the cartoon hero – a compassionate and determined seven-year-old Latina girl – and her intrepid sidekicks include her cousin Diego, a monkey named Boots, a talking map, and a magical backpack. As each story gets underway, the charismatic Dora says, “Let’s go!” as she leads her posse of adventurers in finding a lost treasure or rescuing an animal in distress.

Along the way, Dora must overcome physical obstacles, solve problems, and persevere against the dastardly (though feeble) attempts of Swiper the Fox who consistently tries to steal things from her. Nevertheless, Dora always succeeds, and she invites her friends into a customary group dance accompanied by a sing-along song that includes the affirming words, “We did it!”

But as the old saying goes, that is not the end of the story. The signature feature of every Dora episode is the fact that the story remains incomplete without the participation of the viewer or the reader. This is where we can ponder the corresponding relationship between Christians and the overarching story of Christ’s work in the world.

At every turn, Dora looks out at the readers or viewers, expecting us to help. In the face of every problem or obstacle, she turns her head and looks at us as co-adventurers rather than passive audience members.

Moreover, Dora literally calls upon the audience to participate by speaking words or joining in physical movements in order to ensure the effectiveness of those words or movements in the story. This means that story time with my kid is not a quiet time – the quiet listening is punctuated with shouts and a variety of enthusiastic physical movements.

For example, in one story where Dora, Diego, and Boots are in the midst of trying to rescue Baby Jaguar, my child and I are expected to beckon a dolphin by making clicking noises, say “Backpack!” in order to activate the magical backpack, hold our arms out in front of us as if to hold onto a waterskiing rope, and flap our arms like a condor.

In the video series, all of these sorts of requests are usually followed by several seconds of silence as Dora looks out expectantly at us as her teammates, waiting for us to repeat words or do the called-for actions.

Dora is certainly not looking for external affirmation. She is much too self-assured for this. Instead, she is looking for what we might call “external instrumentation” – some kind of necessary, instrumental behaviour from outsiders. In other words, Dora’s achievements depend on loyal collaboration by the reader.

Thus, the narrative structure of Dora the Explorer can remind us of the narrative structure of the Gospels. Dora says, “Let’s go! We can do it!” Jesus says, “Come and follow me.” Dora looks out at the readers with anticipation, assuming they will participate. Jesus looks out at the disciples with love, assuming they will play a part in healing, extending compassion, and preaching the gospel of peace. Neither Dora stories nor Jesus stories allow for couch potatoes.

Other New Testament texts amplify this theme of people joining in the work of Christ. For example, 2 Corinthians chapter 5 declares that we are ambassadors for Christ and that we have been given the ministry of reconciliation. Colossians 3 urges us to let the word of Christ dwell in us richly. The letter to the Ephesians instructs us to “grow up” into Christ (4:15) and to “put on” the unexpected “disarmament” of the Lord. (6:10-17) As unfathomable as it may seem, Jesus transfers the story to us as protagonists of redemption and reconciliation.

This does not mean renouncing God as the Everlasting Author of the story. It means affirming the cross both as a revolutionary sign of Christ’s victory and as a reminder that the gospel of peace continues to prevail, in part, through human partnership or “instrumentation.” It means abiding by Jesus’ message, “Peace be with you. As God has sent me, so I send you.”(John 20:21)

However, the plot thickens when we meet Swiper the Fox. Without fail, Dora adventures include some sort of melodramatic encounter with the cunning Swiper who pops out from a hiding spot in order to steal an essential piece of equipment or even one of Dora’s animated object-friends.

In response to Swiper’s attempted burglary, Dora, her friends, and we as readers need to say, “Swiper, no swiping!” Three repetitions of this simple command appear to thwart Swiper every time. We watch him skulk away while snapping his fingers and whining, “Oh, man!” Dora acknowledges our assistance by saying, “Great job! Thanks for helping us stop Swiper!”

Even on its own terms, Dora stories could generate some fascinating analysis in terms of the “demonology” of Swiper and the resulting messages children receive about how to respond to people of ill-intent. In any case, as we look at Dora stories as lenses through which we can better understand our own Christian story, the Swiper phenomenon can be a springboard for understanding a key aspect of Jesus’ peacemaking vocation.

There are two things going on within the Dora-Swiper encounter. First of all, as friendly and as winsome as she is, Dora holds tremendous power and authority over Swiper – so much so that her verbal rebuke is enough to stop him in his tracks. Secondly, Dora redirects Swiper back to the world where collaborative exploration reigns supreme – where swiping is an aberration, a parasitic behaviour, an interruption of the storyline.

The parallel in the Jesus story is much more grandiose. Jesus consistently sets people straight with their God-given vocation of doing justice, transforming conflict, and walking with those on the margins. Moreover, Jesus engages the larger-than-life demons – the principalities and powers of violence, hatred, greed, and sin – that prey upon and interrupt the deeper storyline as established by God. Though these “Swipers” are of biblical proportions, Jesus demonstrates that love is stronger than all of them – that all of them should return to their original purpose – and he tells his followers that this type of exorcism is part of their work. (Mark 3:13-15)

In this way, peacemaking goes hand-in-hand with worship. In the Jesus story, making peace becomes inseparable with praising the One who rules over all “Swipers”, both big and small. Building cultures of peace, transforming hatred, advocating for reconciliation, resisting the myth of redemptive violence – these become synonymous with proclaiming the Lordship of Jesus and venerating the everlasting grandeur of God’s love.

A question remains: How do we make sense of an apparent contradiction between Jesus’ categorical Easter victory over the powers of violence and the reality that these powers still wreck the planet, poison us with hatred, and destroy people’s lives the world over?

Perhaps we can take counsel from Dora on this point. She never asks why Swiper keeps coming back. Instead, she maintains an indomitable spirit and just keeps on confronting him over and over again.

Is Dora a pragmatist? Clearly, she does not try to save the world (in this regard she is most unlike Jesus). Instead, she identifies each manageable assignment, establishes a strategic plan, overcomes the necessary obstacles, confronts the ubiquitous Swiper yet one more time, and celebrates very well when the goal has been achieved.

At the same time, however, success within this cartoon world emerges from something more than “just” the completion of a single adventure, or even the accumulation of multiple Dora episodes. In fact, there is an “in-order-to-ness” about the entire story.

The makers of Dora give overt explanations about why they made the cartoon interactive: they want to infuse children with problem-solving skills, they want children to be cooperative and respectful of others, and they want children to feel confident, creative, and actively involved in the world. Notwithstanding the commercial success of Dora with all her branded merchandise, each of her stories therefore serves a greater purpose and, as the old saying goes, the whole becomes greater than the sum of the parts.

In the same way, the story of the Prince of Peace moves forward precisely because it is more than an accumulation of remarkable events – God becoming incarnate in the world, Jesus teaching people about the many faces of love, the empty cross proving that there is a force more powerful than violence.

In both subtle and overt ways, the biblical story shows that discipleship involves following Jesus’ specific teachings as well as fostering the very “mind of Christ.”(Philippians 2:5) With an increasing possession of this mind, Christians find a refreshing blend of faithfulness and effectiveness as they bear witness to Christ’s nonviolent love – precisely the kind of love that reigns over fear, injustice, and all manner of brutality.

This is the final lesson: The story forms a nonviolent community of character. As followers of the Prince of Peace in the twenty-first century, we walk in all sorts of uncharted territory where there are no clear answers to the “what would Jesus do” question. Nevertheless, Jesus exhibits a unique, nonviolent disposition – one that also reveals the character of God. We equip ourselves well by actively fostering this “mind of Christ” in preparation for the regular occasions when we have to respond to conflict as individuals, communities, and even nations.

Will further discoveries await those who read Dora in one hand and the Bible in the other? Perhaps a follow-up study could look at how Dora encourages children to learn Spanish words as an obligatory part of each adventure, thereby encouraging the use of “middle axioms” when interacting with those from very different religious or philosophical traditions. In pursuing peace, did Jesus adopt a multi-lingual approach, or did he require peace to be defined and constructed in only one way?

And so the story goes. When Baby Jaguar calls for help, Dora sounds the call and we move into action. Sometimes, even before we succeed, we hear Dora’s song of celebration.

The drama runs far deeper within our lives as followers of Jesus, the Prince of Peace. We plug away, we make choices for peace (sometimes unpopular ones), and we try to remain true to our calling. From time to time, we begin to hear the distant anthem of the new heaven and earth, where the Prince of Peace will be fully at home among us. (Revelation 21:1-5)