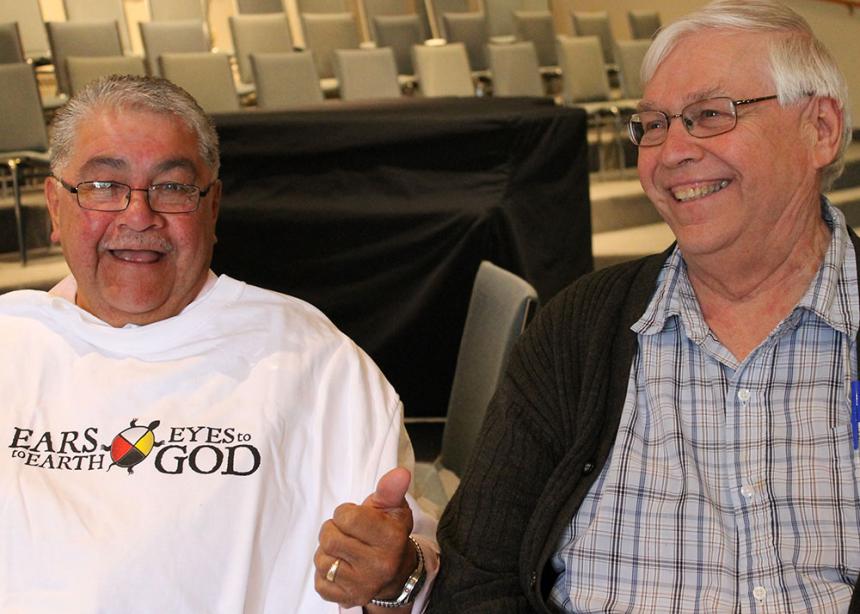 “Little is known about the day school part of our colonial history and it is pretty critical we get to know it,” said Steve Heinrichs, director of indigenous relations for Mennonite Church Canada. “We have day schools in our Mennonite church history. It hits home.”

Mennonites and the Indian Residential School system was the focus of the eighth annual Partnership Circles meeting at Charleswood Mennonite Church on April 26. The Partnership Circle meetings and the annual Building Bridges event are co-hosted by MC Canada and MC Manitoba to strengthen relationships and partnerships between Mennonite churches and first nations.

Before the Partnership Circle discussion could move to day schools, participants wanted to distill what Justice Murray Sinclair had expressed the evening before, particularly his challenge to respect aboriginal spirituality.

“Christian religious superiority was guiding a lot of the missionary zeal,” Heinrichs said. “Many of us still believe our faith is superior. I’m personally challenged. How are we going to respond to this wise word of challenge?”

Norman Meade, pastor and elder, said, “Everyone has to examine their own relationship with the One we know to be God. My way is through Christ, but maybe my friend has another way. That should not stop us from being friends. I should respect him for that.”

Ray Mason, founder of Spirit Wind Survivors Inc., and an advocate for day school survivors, explained that in Manitoba there were 14 day schools and 114 across Canada. “A quarter of a million people were affected by day schools,” he said. There were several different kinds of day schools, including those that were church run. “Our class action [lawsuit] brings them all together,” said Mason. “In some cases, some of our day school brothers and sisters were abused worse than us in residential schools.”

“Although we were not as involved as some other denominations, we were definitely involved,” said Heinrichs. From 1948-68, Mennonites operated day schools on the Sunchild Cree Reserve and at Fort Vermillion in Alberta, and in Pauingassi and Bloodvein in Manitoba. In 1955, “an official in the Canadian Department of Indian Affairs estimates that between one-third and one-half of all teachers in the ‘unorganized territories’ [land located outside the boundaries of settler governance] were Mennonites,” Heinrichs said.

Eagon Ens taught in the first nation communities of Little Grand Rapids and Bloodvein. “I had to make sure the children didn’t speak their language,” he said. “I didn’t follow that, but I still taught our culture and our value system.”

He described when, after the Catholic and Mennonite schools were closed and the schools were taken over by Indian Affairs, he was invited by the community to be principal. “Although we had the invitation to come in, did we still follow the lead of the community?” he wondered. “I had no say in who was hired to teach. The three teachers that were hired had no qualifications.”

“Our communities were getting second-class education,” Mason said of the situation.

Melanie Kampen, who has just completed her master’s thesis on indigenous theology, was asked to respond by reflecting on what she thinks the Mennonite church needs to do in the next five years. “The most emphasized thing I heard was the challenge: ‘Can the churches make a statement that aboriginal spirituality is a valid and equal means of worship?’ ” she said, adding, “We need to wrestle with this.”

Kampen suggested more research be done, searching out stories of day scholars and examining the attitudes in the reports, official documents and theology that was brought to indigenous ministry. “Perhaps we need to consider revising some of our official documents,” she said.

“Mennonites have not attended to their own trauma,” Kampen said. “It is important for us to work on our own community and to have our own healing circles. Not coming to terms with our own trauma is a real obstacle to feeling empathy with others. We have trouble identifying ourselves as colonizers.”

“We must continue the dialogue with respect, love and understanding because we have to live together,” Mason concluded. “It’s a long journey that we need to take together.” 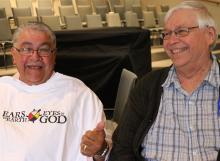