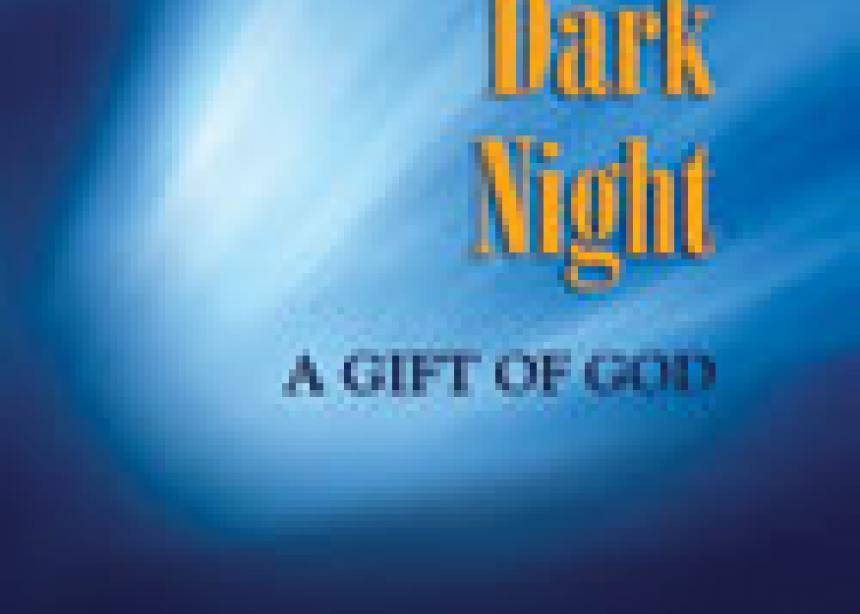 Have you ever felt abandoned by God? You pray, go to church and read the Bible, but God seems so far away. What’s going on?

“This is something that Christians rarely talk about, but which many experience,” says Schrock, author of Dark Night: A Gift of God (Herald Press). It’s not a punishment, he adds. “It’s one of the ways God changes us so that we can more closely resemble the person God wants us to be.”

The idea of the dark night—often expressed as “the dark night of the soul”—was coined by John of the Cross, a 16th century poet and spiritual guide.

“The dark night is not the same as a lack of belief,” says Schrock, a spiritual director and pastor at Berkey Avenue Mennonite Fellowship in Goshen, Ind. “And it isn’t depression, either. It’s a feeling of spiritual dryness—you can’t pray or worship in a meaningful way, and the things that used to feed you spiritually don’t do so anymore.

Schrock points out that the experience can happen to anyone, including those we regard as being among the most spiritual—people like Mother Teresa. Although she is widely acknowledged as one of the most “saintly” Christians of the 20th century, she experienced the dark night for about 50 years.

“It was only after her death that we discovered from her private letters how deeply she struggled with a sense of abandonment by God,” he says.

His own experience of a dark night lasted for seven years, starting in 1998. “God seemed far away, for no reason I could think of,” Schrock says. “I was active in the church, enjoying my job, worshipping and praying. Yet God never felt so distant.”

At first he was fearful, then resentful. Why was God doing this? Later, he came to see it as part of God’s plan for his life. “God used that time to change the way I prayed,” he says. “I became more contemplative. I listened more for God, instead of just talking to God. I learned to experience God at a deeper level.”

At the same time, he experienced a reorientation to the “attachments” in his life. “I feel freer from some of the things that used to divert me away from God: activities, programs, hobbies, sports, music, TV. I still enjoy some of them, but they are no longer the centre of my life like they once were.”

Schrock says he came out of his dark night “with stronger faith. I can endure suffering and hardship a little better, and I have a deeper relationship with God, a stronger commitment to mission and a greater desire to serve others.”

He acknowledges that, when in the middle of it, a dark night “rarely feels like a gift.” But, he goes on to say, “just like the Exodus and the exile in Babylon were used by God to help the children of Israel become the people they were meant to be, my dark night helped me to become more of the kind of person God wants me to be.”