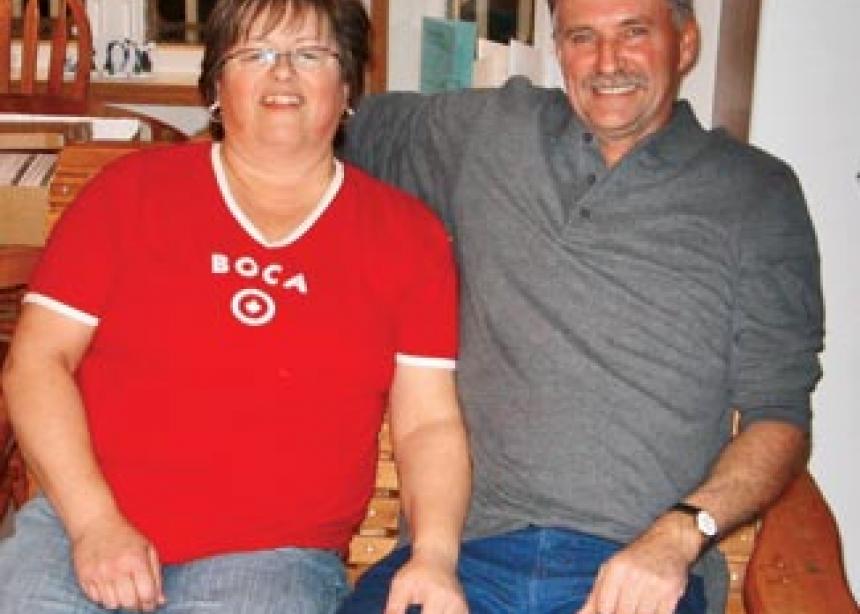 After his life began spiralling downhill seven years ago, Len Bergen of Winnipegosis, Man., right, now is serving as a lay minister at Nordheim Mennonite Church while waiting for the Lord’s call taking him and his wife Mary into mission work.

When a crisis hit Len Bergen seven years ago, his life began to spiral downward. Now seven years later, he sees how God did not abandon him, but led him through and out of that dark valley to a place that he never could have expected.

A third-generation Winnipegosis cattle farmer, Bergen had followed his passion for raising cattle for 40 years. He could never have imagined another livelihood. Together with his wife Mary, he raised their three children to share this same interest and passion. Then seven years ago disaster struck their farm and their family. The mad cow disease crisis crashed down on his operation and their income quickly dropped by more than half.

“To add to the anxiety, that same summer our oldest son had an accident which kept him struggling for his life in intensive care for a whole month,” Bergen says. He and Mary rushed to the Edmonton hospital to be at their son’s bedside. “To see him unconscious and hooked up to all the tubes, I fell apart,” he recalls. During the month they spent by his bedside, they began to see little miracles as he regained consciousness and made strides towards recovery. “We knew the church back home was praying for us,” he says.

With their income cut by more than half, poor prospects for the farm’s future and their son’s uncertain recovery, Bergen became overcome with anxiety and depression. “I cried to God, not knowing what to do,” he says.

He had drifted away from the church several years earlier, although his wife and children continued to attend Nordheim Mennonite Church in Winnipegosis. However, during this time Bergen found himself returning to the church. Many times when they didn’t know how they would make their next payments, “God somehow always provided,” he says.

One winter Bergen enrolled in group counseling sessions to help overcome the anxiety that plagued him. As he experienced healing his counsellor encouraged him to study counselling, so he enrolled in evening classes for a two-year course.

But Bergen was also experiencing another call. “During a prayer time at a spiritual ministries team meeting one night, I felt led to go into ministry,” he says. “I tried to ignore this calling because I felt so unqualified and didn’t even understand the Bible all that well.”

He tried to resist the call, but it wouldn’t leave him. One day as he was reading Ephesians 4:1-6, Paul’s words, “I beg of you to lead a life worthy of the calling to which you have been called,” stood out and he told Mary about his experience. She then shared with him that during the time he had left the church she had experienced a vision of him as a leader in the church. Bergen then shared his experience with his pastor, Abe Krahn.

Since then, Bergen’s involvement in the church has grown. He is involved in leadership and was accepted last June as a lay minister. He finds speaking a challenge, but draws strength from the encouragement and support of people at Nordheim.

He knows that God is close to him. Even though their son still suffers from leg and back pain, and their income is still not back to where it was, he and Mary look to the future with optimism and faith. “Depending on where the Lord leads, we would like to do missions within the next few years,” he says, excitement in his voice.

As for his passion for farming, it still remains with him, but he and Mary are open to wherever God leads: “We are holding the future open to God’s leading.” 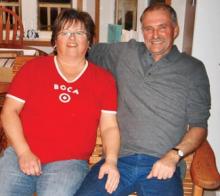 After his life began spiralling downhill seven years ago, Len Bergen of Winnipegosis, Man., right, now is serving as a lay minister at Nordheim Mennonite Church while waiting for the Lord’s call taking him and his wife Mary into mission work.

I totally agree with what Len Bergen said about faith and crisis. I come from a Catholic family, and there are so many things that we experienced, some of which were so challenging and provoking. Len Bergen's life experience and mine are almost the same. I remember years ago my family had a financial problem, my dad lost his job, and everything we had was gone. People started pointing fingers at us and gossiping.

In those times of suffering, it never rained but it poured. I started feeling under the weather, I was taken to the hospital, and it came to be that I had pneumonia. The doctor said that he could not help us with anything until we paid money for consultation. My parents had no other choice than to take me back home. People kept on praying for me.

Through all the hardship, and when I almost gave up with life because I could not eat or drink anymore for almost 6 months, God did not abandon my family and me. He strengthened and comforted us. This was just an example how crisis can lead to faith. There are all sorts of people out there in the world that have been changed through crisis.

Lastly, I would like to tell all the people who are going through the same situation to be strong, because, come rain or shine, God will always be there waiting for us.