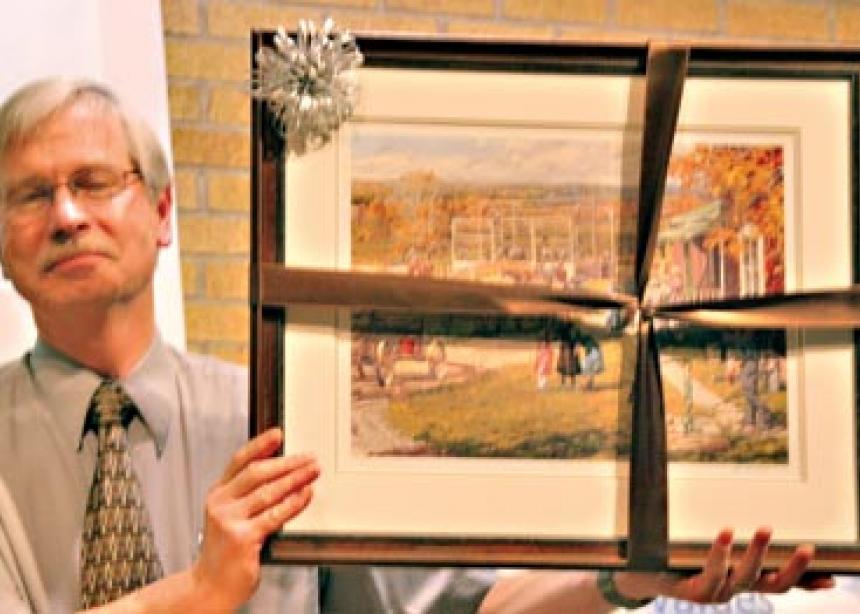 It was standing room only at the 46th annual general meeting of the Mennonite Savings and Credit Union (MSCU) last month in Kitchener.

Many were there to discuss a board proposal to change the membership bond defining who can and cannot be members of the credit union. The MSCU bond had been restricted to members of Mennonite and Brethren congregations, their children and spouses, and the employees of Anabaptist institutions, such as Mennonite Central Committee, that the congregations support.

The board proposed allowing anyone who agrees with the new Mennonite World Conference (MWC) “What we believe together” seven faith statements to become an MSCU member, and allowing employees of Anabaptist institutions to remain credit union members even after they are no longer employed by those institutions.

Trevor Bauman, a member of the board, noted that the membership rules of many congregations were now looser than those of the credit union, which led to the board’s proposal.

Significant time was taken to consider an amendment to the motion that would have restricted the make-up of the executive board and committees to only Mennonite and Brethren congregational members.

Elmer Shantz, the mover of the amendment, had discussed it with the board prior to the meeting. He said he feared the loss of the mutual nature of the credit union, as had happened with the move to offering public shares by many former “mutual” insurance companies.

Aaron Klassen of Stirling Avenue Mennonite Church, Kitchener, said he feared the loss of the credit union to non-church people, a concern expressed by others who supported the amendment.

Those who spoke against the amendment raised issues such as a two-tier membership and the need for the credit union’s “one member-one vote” policy to continue.

After the discussion, which sent the meeting into overtime and cut short a performance by the DaCapo Chamber Choir, the amendment was soundly defeated and the motion passed overwhelmingly.

Shantz noted that he was not against the original motion per se, but felt that it needed to be limited so as to retain the sense of community and mutual accountability. In a conversation afterwards, he noted that he accepted the decision of the membership.

Besides the regular business items to attend to, the meeting also recognized and celebrated Nick Driedger’s retirement as chief executive officer after more than 27 years of service at MSCU. Driedger has been replaced by Brent Zorgdrager, a member of Waterloo Mennonite Brethren Church, who was officially introduced to the membership. The evening ended with a celebration of Driedger’s long service as everyone was invited to share in eating his favourite dessert: cheese cake with blueberry topping.