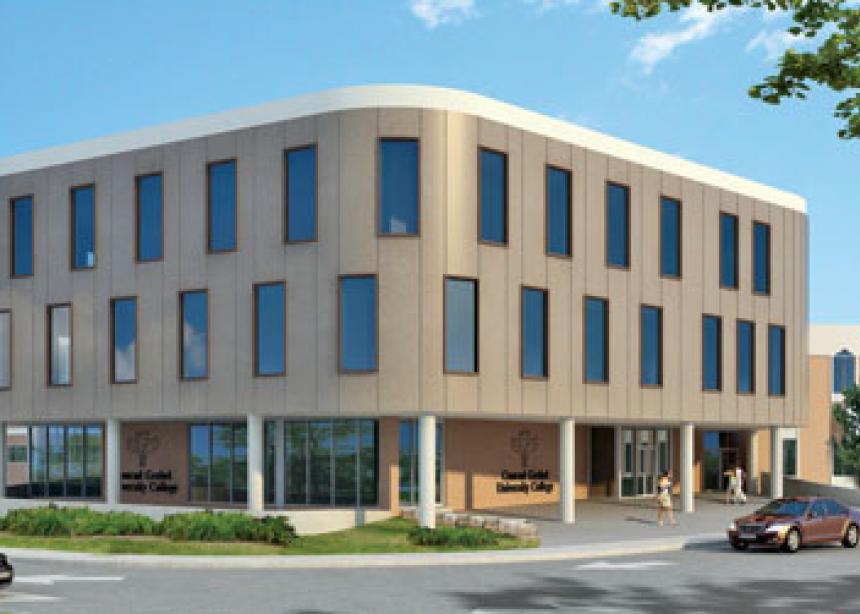 Susan Schultz Huxman, the newly installed president of Conrad Grebel University College, called it a “transformative gift, the largest single gift in Conrad Grebel’s history.” And it was especially fitting on the eve of Remembrance Day.

It was with a great deal of excitement that Mennonite Savings and Credit Union of Kitchener, Ont., gave $1 million to Grebel for the Centre of Peace Advancement, an event celebrated by the staffs of both institutions, alumni and friends, as one after another spoke of Grebel’s vision to “build partnerships with affiliate groups, seek grant and contract funding, leverage our credibility to sponsor performances, workshops, symposiums, publications and apprenticeships around peace,” as Huxman put it.

Brent Zorgdrager, the credit union’s chief financial officer, noted that the gift adds a fourth floor to the new building announced in the spring. He expressed hope that it would have “lasting impact,” and that it would build on what was already established as the oldest peace and conflict studies archive in Canada. He further hoped that the credit union’s 18,000 members will see the gift as “stewardship in action.” The new building is slated to open just in time to mark Grebel’s 50th anniversary in 2013.

Susan Taves, chair of the Grebel board, used the metaphor of a train leaving the station before it was time, to describe the gift. She compared the credit union to someone running after the train, shouting, “Wait, you need to take a second look” (at the original planning for the expanded library, classroom and music space). “You need to do this,” she quoted the credit union’s leaders as insisting.

Caleb Redekop, a student enrolled in the peace studies program, said that giving infrastructure to peace studies would “inspire others to apply their scholarship to the advancement of peace.”

Pam Fehr, the public relations director for the credit union, said that even her young daughter got “super-excited” about the project, her mother seeing Grebel as a place to “shape and grow leaders for tomorrow.”

Huxman noted that the gift “allows us to imagine in bold new ways how we celebrate our common visionary—J. Winfield Fretz, the first president of Conrad Grebel and founding member of the Mennonite credit union.”

She spoke of the impacts of the new centre as a collaborative effort with colleagues, students and practitioners to:

“By putting all these different people in a setting where they all interact with each other, we maximize mutual influence and creativity,” Huxman said. “This is synergy!”