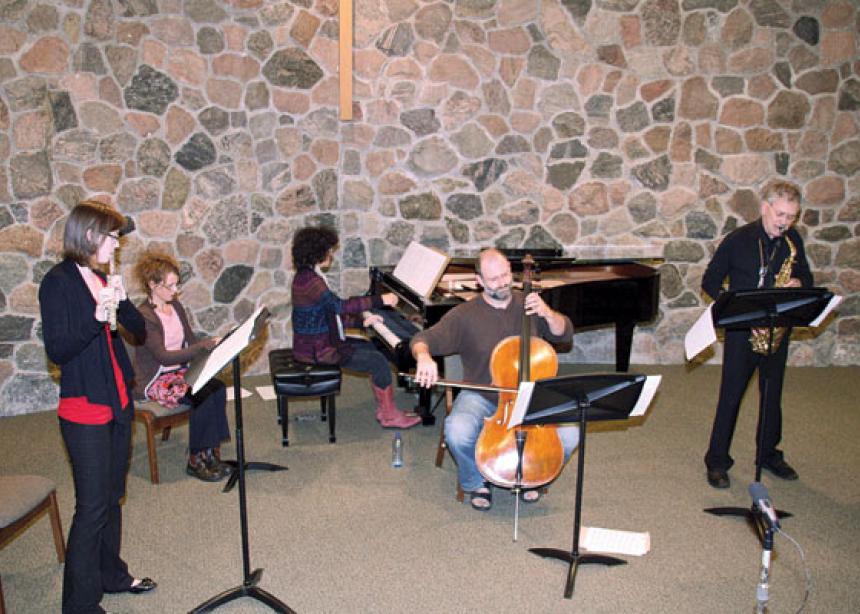 Elementary school student Lydia Herrle was thrown 25 metres after being hit by a truck as she stepped off her school bus in front of her family’s Country Farm Market on Erb’s Road near Waterloo in May. It took months before she came home from hospital and she has years of rehabilitation ahead of her. She and her family attend Waterloo Mennonite Brethren Church.

On Oct. 31, Carol Ann Weaver (professor of music at Conrad Grebel University College), together with Joanne Bender (composer and teacher) organized and performed at a “Courage for Lydia” concert, part of CGUC’s Wednesday noon hour concerts.

Bender performed a series of piano solos of pieces she has created for her younger students, as well as a trio piece together with Ben Bolt-Martin (cello) and Marianne Wiens (violin), connecting each piece to Herrle and her healing. Weaver performed Anything World, with a text by Kiera Schneider aged 9 who died shortly after writing the words. Rebecca Campbell, Weaver’s long-time co-performer sang the words:

A quintet of Weaver, Bolt-Martin, Willem Moolenbeek (alto sax), Meaghan McCracken (flute) and Campbell then performed Three Seasons for Lydia Herrle—Summer Silence with piano and the cello providing Herrle’s heartbeat; Autumn Dawn blending the sense of the dawn slowly rising out of the mist, combined with the healing energies of Joyce Mazibuko a South African Healer; and Winter Prayers and Blessing a gentle moving prayer and blessing which, according to Weaver, had to be written before the larger piece was done. “God has ways of bringing out creativity,” she noted.

The chapel was full to overflowing, including some of Herrle’s family.

Seemingly in answer to the concert’s prayers and hopes, Herrle was released from hospital and walked home from the family store the day after the concert. The lane was lined by friends and family, many with bright green ribbons which adorned many vehicles, mailboxes and people in the months since the accident.