In conversation with an atheist 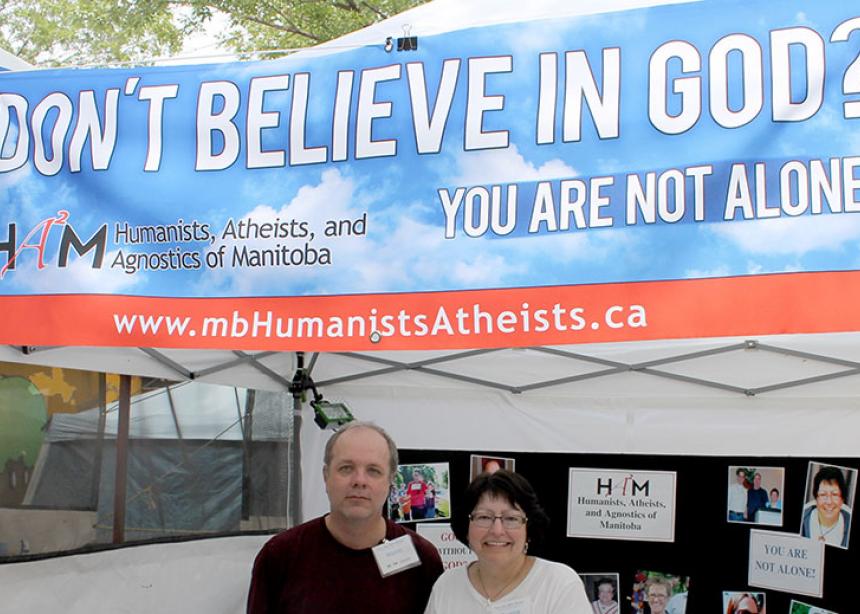 Former Mennonite Norm Goertzen stands beside Donna Harris, president of the Humanists, Atheists and Agnostics of Manitoba, at the organization’s booth at the recent Morden Corn and Apple Festival.

Norm Goertzen recalls falling silent for 20 seconds, his coffee cooling. His atheist friend, whom he had been trying to convert for some time, waited. It would be a critical moment in an ongoing conversation between the two thoughtful 18-year-olds.

At the end of the pause, Goertzen said, “You know, you’re right. I think I was wrong.”

With that, he went from being a devout Mennonite-raised, Billy Graham-converted Christian to a devout atheist. He realized, as he puts it, that he was hanging on to beliefs that were not based on sound evidence. He had to admit that his friend’s viewpoint made more sense than his. It was a matter of “intellectual honesty.”

I met Goertzen at the Morden Corn and Apple Festival last month. While the rest of my family stood in line for the Ferris wheel, I set out for the booth of the Humanists, Atheists and Agnostics of Manitoba (HAAM). Their public outreach foray into Manitoba’s Bible Belt had generated some media attention and piqued my curiosity.

When I found them, Goertzen was chatting with a delightful older couple who were beaming at the chance to chat openly with other atheists. None of them seemed to mind a curious local Mennonite joining in. They didn’t jump on me when I declared my belief in God.

While the atheist banner has been flown most prominently in the past decade or so by provocateurs Richard Dawkins, who wrote The God Delusion, and the late Christopher Hitchens, who wrote God is Not Great: How Religion Poisons Everything, Goertzen’s tone is different.

“I have no interest in being confrontational,” he said. And he wasn’t.

Why then did they come to Morden? Goertzen knows what it’s like to be a non-Christian in a Christian world. “I was alone,” he said of his early atheist years. He would have appreciated someone to talk to. That sort of “moral support” is part of what HAAM tries to provide.

Goertzen said he met a number of atheists at the fair who said they could never “come out” to their families, but wanted to connect with others of like mind. He also said several people snuck HAAM contact cards, as if they didn’t want the people with them to notice.

For Goertzen—who is a member of HAAM, but does not officially speak for the group—the other purpose of being at the festival was to make atheists visible. He got the impression that some people who visited the booth had never encountered an atheist before, that they had little sense of atheists as regular fellow human beings.

He said some people were obviously deeply offended that HAAM was at the festival, glaring at them or getting emotional in stating their opposition, but for the most part people were respectful.

The group’s next outreach effort involves ads on 10 Winnipeg buses for parts of September and October. The ads read, “Don’t believe in God? You are not alone.” HAAM president Donna Harris said via e-mail that the ads are intended to let “non-believers who may be feeling isolated” know that “there is a local community where they can feel safe and supported.”

An overt atheist presence in society raises some interesting and awkward questions. How do we feel about espoused non-believers? What is our vision for our increasingly pluralistic society? Are we still in the business of converting people so they won’t go to hell?

A Mennonite elder taught me that if I am grounded in my own identity, I can hang onto my beliefs and identity with one hand while reaching out with the other.

In an increasingly divisive world, I think it is vital to seek the acquaintance of people with differing views, to understand them and connect with the humanity in them. That’s how peace happens. That’s how we learn about ourselves and others. That’s how we mature as human beings.

That is why I chose the HAAM booth over the Ferris wheel besides the fact it was much cheaper.

As for conversion, let’s be honest: Some Mennonites believe staunchly in heaven, hell and the Four Spiritual Laws. Others don’t. Many of our churches do little to convert people in the traditional way. My sense is that people in the latter group—you can guess where I land—are very hesitant to state their beliefs about conversion openly. But maybe greater honesty on this point would be healthy.

Former Mennonite Norm Goertzen stands beside Donna Harris, president of the Humanists, Atheists and Agnostics of Manitoba, at the organization’s booth at the recent Morden Corn and Apple Festival. 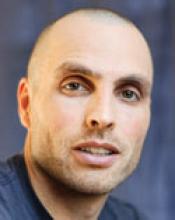