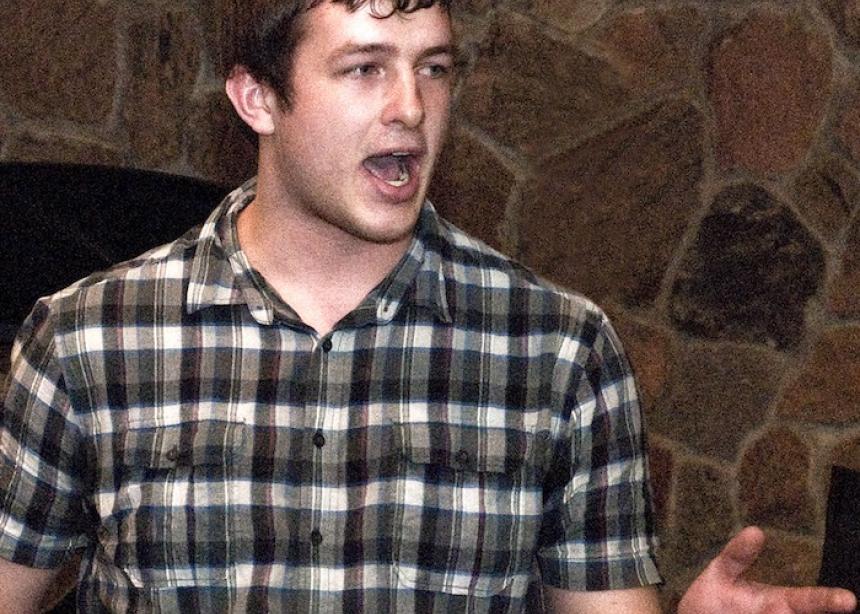 John Wray believes he knows what it will take for peace to rule in everyday life, all over the world.

The only catch is that we’ve all got an assignment.

Wray, a 2010 alumnus of Conrad Grebel University College, Waterloo, Ont., articulated his conclusions in a speech that took first place in last year’s C. Henry Smith Oratorical Contest. His speech was entitled, “Seeing the Human in the Human.”

The annual event, open to students in Mennonite and Brethren in Christ universities and colleges in Canada and the United States, is administered by Peace and Justice Ministries of Mennonite Central Committee (MCC) U.S. The top three speakers receive scholarships to attend a peace-related conference or seminar as well as cash prizes, with $300 awarded for first place.

In his speech, Wray, of Kitchener, Ont., and now a student at Atlantic School of Theology in Halifax, N.S., identified actions that demonstrate for him a lack of seeing the human in the human. He told of a soldier quoted as saying that the person he shot and killed on the battlefield was “‘just an outline for me,’” rather than, as Wray said, “a human being who maybe liked poetry and maybe played soccer and maybe had a family.”

Wray said dropping bombs, racism or other forms of discrimination, and gossip are other ways people forget about or discount the human in the other.

Wray said Jesus saw not only a person’s “skin and bones but the very core of their being.” He noted that Jesus mingled with people stricken with physical illnesses or disabilities and ostracized by society. Wray said that when Jesus healed leprosy, for example, the healing extended beyond that malady. Rather, the miracle is “… in the touch, the release of the social exclusion, the acknowledgement of the leper’s humanity.”

Wray suggested that, “[T]he ‘I see you’ idea has the ability to transform everyday life because labels will disappear, stereotypes will vanish.”

He realizes that we do not yet see the human in one another on a regular basis. Our assignment continues.

The text of Wray’s winning speech can be read online at us.mcc.org/programs/peaceeducation.

The 2010 second winner, whose cash prize was $225, went to Jessica Sarriot, a student at Eastern Mennonite University. Her speech was titled, “Peace Churches and War Profits.” Sarriot lives in Harrisonburg, Va.

The third-place winner was Jami Reimer, Brandon, Man., a student at Canadian Mennonite University. Her speech was titled, “Gardeners of Eden: What Christian Peacemaking Means for God’s Creation.” Reimer received a $150 cash prize.

Directors of the C. Henry Smith Trust established the contest in 1974 in honor of the late C. Henry Smith, a Mennonite historian and professor at Goshen College and Bluffton College (now University). Participating colleges host a contest with student speeches on the general theme of applying the Christian peace position to contemporary concerns. These individual campus contests usually take place during the spring semester of the academic year.

Judges for the 2010 contest were Michelle Armster, co-director of the MCC U.S. Office on Justice and Peacebuilding; Prem Dick, personnel placement coordinator in Human Resources for MCC; and Doug Pritchard, co-director of Christian Peacemaker Teams.

In addition to John Wray’s winning speech, more information on MCC’s peace education work, including resources for youth and young adults on conscientious objection and alternatives to military enlistment, can be found at us.mcc.org/programs/peaceeducation. 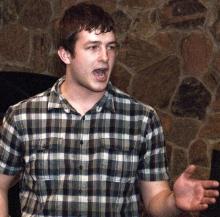