Congolese women calling for an end to the violence against women

MCC supports Congolese Mennonite women who stand with others in support of peace, demilitarization and the end of violence against women. After participating in the World March of Women in October, they are more determined than ever to work for peace. 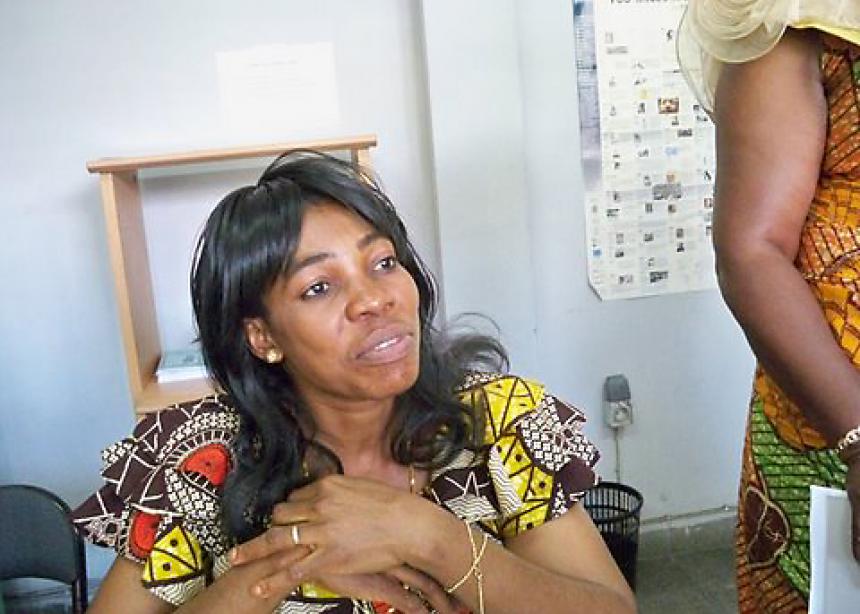 in the Democratic Republic of the Congo, five Mennonite Congolese women joined an international rally of women calling for peace, demilitarization and the end of violence against women.

This global group of women gathered Oct. 17 for the World March of Women 2010 in Bukavu, the capital of Congo’s South Kivu province, one area in eastern Congo where combatants rape women in their quest to control land rich in valuable minerals.

Mennonite Central Committee (MCC) supported the women’s participation in the march and the preceding week-long activities, including speeches, seminars, cultural events and multiple opportunities to fellowship with other women. The Church of Christ in Congo, a Protestant council of churches, hosted the women.

MCC sponsored the women’s participation to encourage their involvement and interest in the broader church, ecumenical connections and peace and justice issues, said Suzanne Lind, MCC representative in Congo with her husband, Tim Lind, both from Three Rivers, Mich. The event also allowed Mennonite women from eastern and western Congo to learn to know each other better as they explored issues they can share in their churches.

Although the pre-march seminars explored the effect of economics, mining, health services, education and demilitarization on Congolese women, the issue of violence against women was prominent.

In 2009, an estimated 15,000 women were raped in eastern Congo, a region overrun by multiple rebel groups and national security forces. These groups vie for access to the area’s wealth of minerals—gold, tin, coltan, diamonds— many of which are needed in manufacturing and electronics industries throughout the world.

In 2010, the largest-scale and most-publicized assault against women occurred between July 30 and Aug. 2. About 250 women, ages 16 to 75, in a dozen villages in an area of North Kivu were gang-raped, many in front of their children and husbands. The perpetrators also looted the villages.

In South Kivu, traumatized women and children told similar stories to the five Mennonite women and others who, on the day before the march, traveled to Mwenga, a town at the center of the military conflict.

The road leading to Mwenga was lined with women and children sitting on the ground, wearing black, and wanting to tell their stories. At each village, the delegation of Protestant women, including the five Mennonite women, stopped to talk with the people and to console the women.

“What was once just something we heard about has now become very real to us,” said Fifi Pombo Madikela, a Mennonite Brethren pastor and women’s leader in Kinshasa, Congo’s capital.

“We talked with many women who have been raped, beaten, forced to flee their homes. We visited a hospital where their terrible injuries are treated. We heard firsthand stories of massacres and terrible murders. We know we must work hard now to teach peace to children and young people so that this vicious form of war will end,” Madikela said.

In eastern Congo, rape has become a “horrible sickness,” said Suzanne Lind. The sickness is caused, Lind said, by the past 200 years of violent exploitation of the Congolese people, poverty and the world’s greed for the country’s abundant natural resources.

“The primary purpose of rape (within Congo’s war) is to destroy the strongest ties of solidarity within communities, leaving them easy to displace and control,” Lind said. “The land then quickly becomes available for mining and the forests for cutting by the strongest group. Motivated by the big money available through the sale of minerals, leaders on all levels (military, local government, national government) encourage and condone violent anarchy as a way to make money and remain in power.”

The Mennonite women who participated in the World March of Women returned to their homes, in both eastern and western Congo, determined to resist the power of greed and chaos by strengthening their efforts to teach peace and nonviolence.

Meeting women from around the world let the Congolese Mennonite women know they weren't alone and unnoticed. “My heart was very touched by stories told by women from Haiti,” said Lambertine Mubanda, president of the women's association of the Mennonite Church of Congo. “They have suffered so much there.”

Madikela, who is already an extensive researcher on violence against women in her country, said she will use this experience to inform her writing and teaching at the Christian University of Kinshasa.

“We will never forget the joy of standing together to resist evil,” she said, “and we will continue the work.” 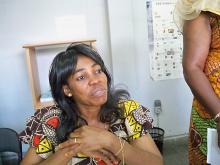