"The concept of taking a Sabbath is a radical concept to grasp." 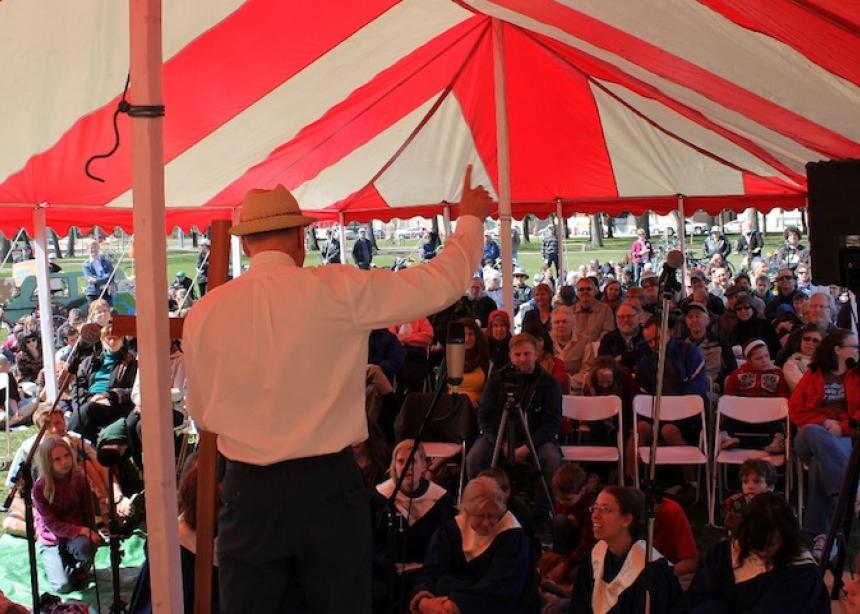 Christians are taught that taking a Sabbath from work is an important spiritual discipline, but some Mennonites in Winnipeg organized a Sabbath from consumption.

Consumption Sabbath, which took place on Earth Day (April 22), included a time for people to “confess” their fossil fuel sins, “testify” to the healing power of living simply, and make pledges for the future.

It was a serious event with a playful twist.

“There’s some principalities and powers, there’s some structures of injustice, there’s some patterns of living that are taking a downward turn, an over-consumptive turn. . . . This is a social sin,” says Aiden Enns, New Order Voice columnist, in a promotional video for Consumption Sabbath.

The concept of taking a Sabbath is a radical concept to grasp, says Maraleigh Short, one of the coordinators of the event. As a fourth-year peace and conflict transformation studies and biblical and theological studies student at Canadian Mennonite University, it’s difficult to take a rest from school work, let alone take a break from entrenched consumption habits. “[Consumption] is something that I myself feel a bit lost in and it’s so easy to not see how damaging it can be to self and community,” she says. “To take a break from it is not an easy thing.”

Because Short is at a point in her life where she feels disconnected from her faith and from the messages at church, she felt it was important to get connected with a message of social justice that is intertwined with her faith. “Maybe [a Consumption Sabbath] is what I need to have a revival of my faith,” Short says.

According to Darren Kropf, a community engagement associate with Mennonite Central Committee (MCC) Ontario and purveyor of the Creation Care Crossroads blog, Earth Day provides an opportunity for the church to connect with the ideas of creation care. “Earth Day is invaluable,” he says. “It is an annual opportunity to renew our commitment to creation and it connects us with the global movement of seeking sustainability.”

On this Earth day, Consumption Sabbath hoped to do just this. “Communities around the world combine their voice in creating a future where creation flourishes and all people have access to its life-giving resources,” Kropf says.

That was the point of Consumption Sabbath.

“We want to emphasize that we’re all in this together,” says Josiah Neufeld, who attends Hope Mennonite Church.

The Consumption Sabbath idea was to shake people from their daily living and bring them together in a collective endeavour to think about their consumption in a new way and make conscious choices to work together, says Neufeld, 31.

“With Consumption Sabbath, it becomes what we can do, how are we going to engage with one another, the church and the community of faith, which in some spheres does proclaim that they are concerned with creation care,” Short says.

“Change has to be a collective endeavour which requires people to come together on a mass level to work together,” Neufeld says. “Our faith communities are essential in bringing about that collective change.

Enns spoke at the Consumption Sabbath service that also included a march from Omand’s Creek Park to Memorial Park, and a traditional tent service where there was also a gospel choir singing. The focus was on over-consumption.

The coordination of Consumption Sabbath was a collective effort of representatives from Charleswood Mennonite Church, Hope Mennonite Church, the Grain of Wheat Church Community, St. Stephen’s Anglican and St. Benedict’s Table, among others.