Red Quarter Moon: A search for family in the shadow of Stalin. Anne Konrad.
University of Toronto Press, 2012 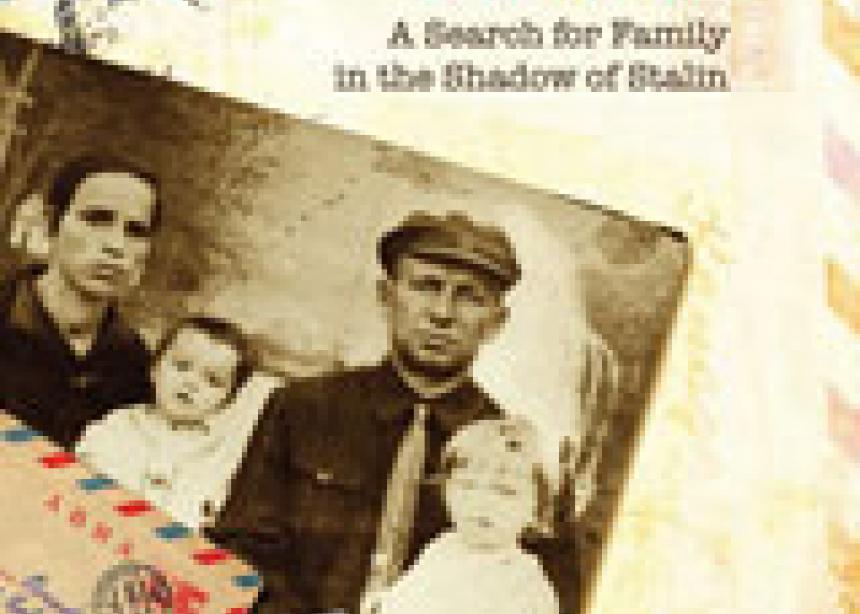 This personal narrative of one of the darkest hours for Russian Mennonites, suffering unspeakably under the repression of a ruthless regime, is one of the most compelling I have read. Reading like a novel with story after story of the suffering, yet remarkable endurance of her extended family, Anne Konrad keeps you glued to the pages as she becomes the spokesperson for the silent, for the sufferers, indeed for the faithful, who against all odds, often stayed true to their Anabaptist beliefs.

What makes it most powerful is that the stories, always riveting in their emotion and energy, are told in historical context so that you always know the backdrop of what was driving the governing officials, the guards and the many henchmen who carried out their ruthless rules.

Even though this English professor, from one of the fortunate surviving families who escaped to Canada, spent the last 20 years persistently tracking down the stories of most of her relatives affected by these tragic times, she tells these stories with compassion and grace without added drama. It’s as if she wept with them when coaxing out the emotions that accompanied their tragedies.

When reading the letters her Uncle Gerhard Konrad wrote to her parents, for instance, whom she describes as a “survivor with the bravado and quiet intelligence and ability to judge situations,” she says she “has an overwhelming feeling of loss. How affectionately he asked about his siblings, how he tried to keep alive the family connections, to honour the past without naming it, to be a humane person in a non-religious state, to be pleasant even when he knew evil intent lurked beneath the surface. He had survived a systematic tyranny, but it took its toll.” (p. 239-40)

It is a grim tale, indeed, but Anne Konrad makes it a labour of love. As her friend, Hiroaki Kuromiya writes in the foreword: “The Bolshevik October Revolution of 1917 and the subsequent Civil War fundamentally changed the lives of Mennonite colonists. The new Marxist government was suspicious of the Mennonite communities, which were tightly organized and resistant to outside control. Their reputation for hard work and apparent wealth—at least greater than their Slavic neighbours—now pointed to them as class enemies.

“They were suspect, to one degree or another in the eyes of all major political groups—the atheist Reds, the chauvinistic Whites, the anarchists and the Ukranian nationalists. The result was outbreaks of violence against them. Thousands disappeared in the Soviet prison system or were killed. Many fled abroad—to Germany, Canada, Brazil, Paraguay and other countries. Some Mennonites, exiled to the Far East, escaped to Manchuria, from where they immigrated to the Americas. The Konrads and the Brauns were scattered around the globe.”

While that description is horrific enough, Konrad spends most of her time letting her subjects tell their stories in first person. For instance, the letters and voice of Maria Braun are presented in the story of life in the Trudarmiia (also called the Labour Army), thusly: “In one of the prisons I had been in, in Omsk, there had been an outbreak and so all my hair had been shaved off. It was in March and was still very cold, and all I was wearing when I left home was a thin dress and so I was very lightly clothed for cold prisons. In prison they gave us soup made from thistles and thistle balls, instead of meatballs.”

Further down in the letter, Maria described her treatment when getting sick: “. . .they called a policeman and forced me to go with him to an icy cold room, where no human being ever belonged and he shoved me into this space and locked the door. There stood iron bedsteads and so I sat down on one of the beds and began to sing. It was bitterly cold in there. The policeman knocked on the door and said, ‘Stop singing!’ So I asked myself who could stop me? So I continued to sing.”

Ah, singing! Konrad refers to this redemptive act over and over again. That, and the love of family, most often kept these suffering souls intact, even in the most unspeakable horror, tapping into two of the most enduring cultural gifts of our spiritual heritage.

The symbolism of the title, Red Quarter Moon? Anne Konrad, the teacher, would like the reader to grasp its significance as “in the eyes of beholder.” But, when pressed, she refers to the quote in her book by Agatha Wieler, who still lived in the small Siberian village from which her parents escaped in 1929. “She wrote cautiously about the many people of the village who had disappeared, about present religious persecution and a hard life. Then in the fantastical phenomenon she described the words jumped out. Of course, red quarter moon. That was the title. That would be the book. She had described probably a perfect lunar eclipse, but wasn’t that symbolic of the Soviet system, an eclipse of innumerable lives and liberties? An eclipse moves slowly, gradually gobbling up the brightness of a moon, leaving a darkness, ending red.”