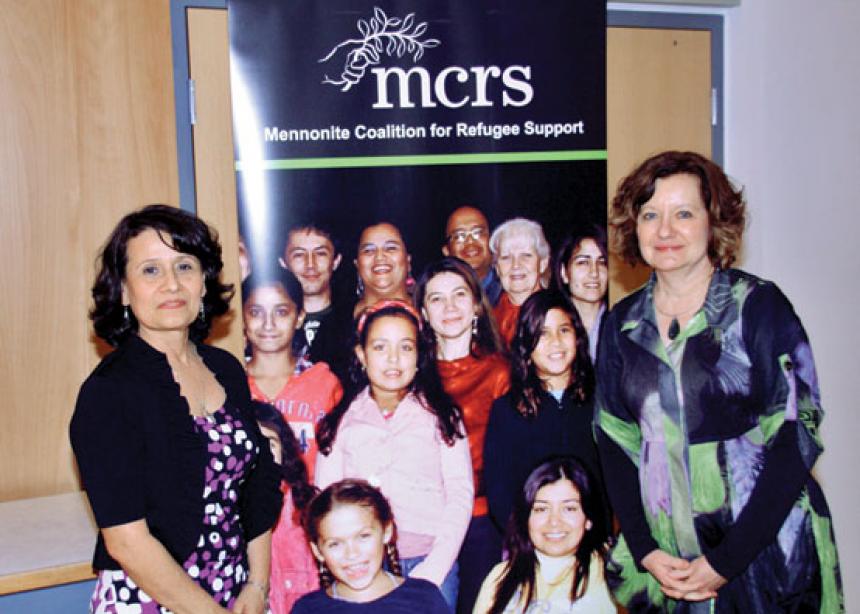 With a swirl of skirts, the stomp of dancing shoes and the flourish of a flamenco guitar, Mennonite Coalition for Refugee Support celebrated its 25th anniversary with a banquet on April 21. The banquet was just part of the celebrations this spring that included an open house at the coalition’s new office space in Kitchener on May 25.

The coalition was founded in 1987 as many Latin Americans fled wars in El Salvador, Honduras, Nicaragua and Guatemala. Many made their way to Kitchener and Waterloo just as Robert J. Suderman and his family finished a four-year term for the Commission of Overseas Missions, and moved to the area for him to work on his doctorate in New Testament studies at the Toronto School of Theology. On the Sudermans’ first Sunday at First Mennonite Church, Kitchener, an El Salvadorian refugee, Luis Sandoval, attended for the first time as well.

Olive Branch Mennonite Church was already involved with Latin American refugees and soon Stirling Avenue and Breslau Mennonite churches were also involved. Although they had support, both moral and financial, from Mennonite Central Committee (MCC), the project was a coalition of congregations. The first staff were hired in 1987, working out of First Mennonite. Two years later, office space was generously supplied by The Working Centre, a multifaceted group that cares for the needs of poor and isolated people.

From the beginning, people who had been refugees themselves have been in leadership. In 1989, Celza Bonilla, a recent social work graduate who had been working in a similar fashion under the auspices of Olive Branch, was hired as a settlement and education worker.

In 1993, Eunice Valenzuela, herself a former refugee, began to work with the coalition and became executive director in 2002.

While the coalition has incorporated and has become more ecumenical, it still honours its Mennonite roots and the support it continues to receive from Mennonite congregations and individuals. Today, it continues to provide support to refugee claimants, advocacy, community outreach, education and a refugee clinic, among others programs and services.

Through the years, the coalition has helped more than 2,000 refugee families, assisting anyone who comes through its doors to make a refugee claim. Board chair Marlene Epp and Valenzuela hope it can grow, as the needs do not seem to be decreasing, and new laws in the making will make it more difficult for potential claimants to make their cases.

Advocacy with the government in regard to laws is also fraught with uncertainty, as new legislation is questioning charity status for organizations that do advocacy work along with work such as supporting refugee claimants.

Valenzuela hopes that Canadians will have their biases against refugees changed. Many of them were leaders and teachers in their home countries, and in many cases it was because they expressed their ideas that forced them to flee. They have gifts and skills to bring to Canadian society, she says, rather than being a drain on social programs, as they are often described.

Although the work is difficult—one day recently three families were deported even though there was danger for them in their home country—the coalition’s employees, board and many volunteers feel that their efforts are worth it.

Noting that Jesus was a refugee himself when his family fled to Egypt shortly after his birth, Valenzuela points out that the prophets continually call for God’s people to “care for the stranger within their gates.”