‘Churches are too quiet’ 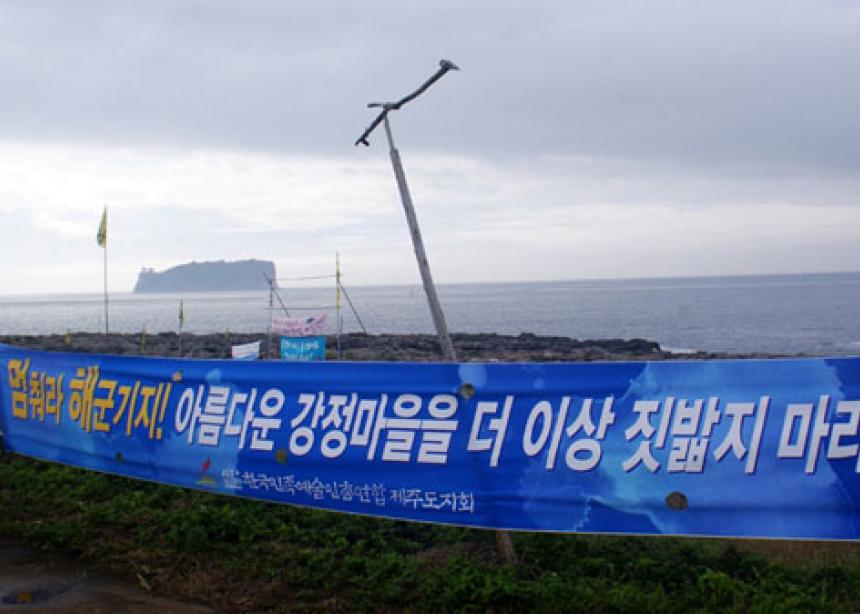 “The sad thing is, the churches are too quiet,” says Kyong-Jung Kim, director of the Korea Anabaptist Center, in Seoul, South Korea. “Either they don’t pay attention to this or they don’t want to step on boundaries that are not welcome by government.”

Kim is referring to the expropriation of property to build a naval base on JeJu Island, which has been declared a UNESCO World Heritage Site, and designated an “Island of World Peace” by South Korea’s former president, Roh Moo-Hyun, in 2006.

The naval base is being “forcefully” constructed near Gangjeong, a village of perhaps 1,500 farmers and fishers, say activists. As a strategic military location in close proximity to South Korea, mainland China and Japan, the island has endured colonization and conflict for centuries.

JeJu Island became an autonomous province of South Korea in 1946, but has enjoyed little autonomy. Just two years later, a civil conflict that spilled over from mainland Korea cost the lives of 30,000 islanders.

For its part, the Korean navy claims that the new “eco-friendly” naval base will create jobs and increase security for the island.

However, Anders Riel Müller of the Korea Policy Institute, an independent research and educational organization, who recently visited the island, reports, “[I]t is difficult to imagine an eco-friendly 50-hectare naval base that will house 8,000 marines, up to 20 destroyers, several submarines and two 130,000-tonne luxury cruise liners.”

In an e-mail prayer request, Kim notes that there are many legitimate reasons for civil society to seek a halt to the construction of the naval base. Local protesters cite environmental destruction, loss of an agrarian culture and the changes it will bring to the local economy, as well as the transformation of a peaceful island into a military target.

While these are strong humanitarian incentives, Kim focuses on a more important reason, one that should inspire churches to take action. “[W]e as Christians cannot help thinking of Jesus’ teaching and action for peace. Jesus would have wept over again if he were standing with us in our situation today,” he says, citing Luke 19:42 and Psalms 2:1.

Advocacy letters can be sent to: Embassy of the Republic of Korea, 150 Boteler Street, Ottawa, ON K1N 5A6.