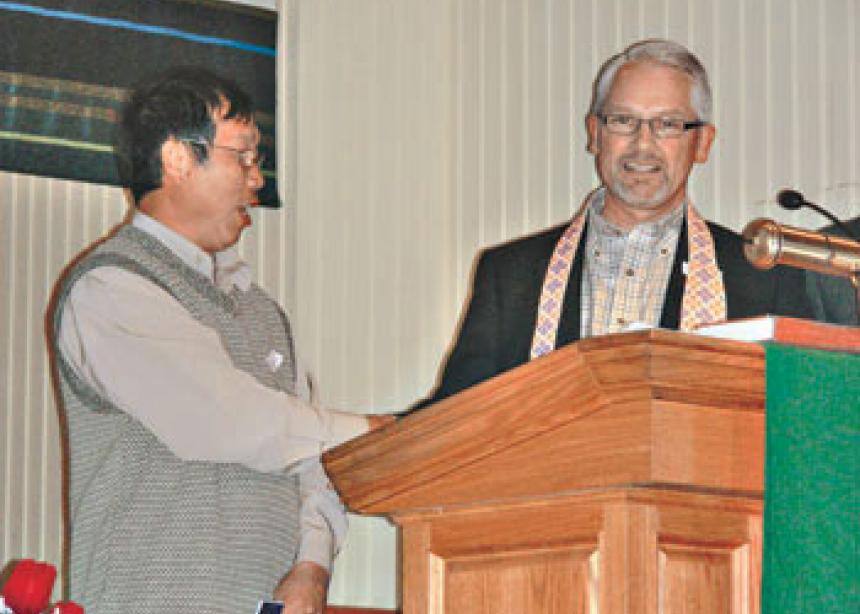 Beginnings, endings and growth marked the Mennonite Church B.C. annual meetings at Eden Mennonite Church, Chilliwack, on April 10, under the banner of “The hope of the reconciling gospel of Jesus.” Delegates welcomed one congregation while saying goodbye to another, witnessed the passing of the leadership torch from one moderator to another, and heard about new ministries in the province.

Learning of expansion projects in the area church through its Evangelism and Church Development Committee was an encouraging highlight for many. Living Hope Christian Fellowship of Surrey reported on its recent involvement in launching a new congregation in Surrey’s Sullivan area. Living Hope had long hoped to be a congregation that could birth another.

“God is a missional God. He is a sending God,” said Living Hope member Carla Hordyk in reporting on her church’s outreach efforts. “I’m a missionary, cleverly disguised as a church member.”

Another growing ministry is the Abbotsford Vietnamese Fellowship under the leadership of Nhien Pham. Pham reported that the group meets twice a month and now includes children and youths. A recent New Year’s celebration drew 200 people, many non-Christian. “Please pray for us,” Pham requested.

A highlight of the day was the reception into membership of Western Hmong Mennonite Church of Maple Ridge. Many Hmong people from Southeast Asia became refugees following the Vietnam War. Eventually, a number came to Canada, with a half-dozen families who settled in Maple Ridge deciding to unite with the Mennonite church family.

“We hope the Mennonites will help us to grow and to change the face of Mennonites to so many colours,” said church chair Ge Yang. “Someday, with the Mennonites’ help, we’re going to build the ‘Mennonite International Church.’ I tell you, that’ll be beautiful.”

MC B.C. also bid farewell to a dissolved congregation. Abbotsford Mennonite Fellowship, which decided to disband earlier this year, was officially recognized for its contributions to MC B.C. for more than a decade.

Delegates passed a resolution from First Mennonite Burns Lake that had been tabled at the 2009 sessions, calling on MC B.C. to commit itself “to license only pastoral candidates who have the qualifications and who agree with and accept the Confession of Faith in a Mennonite Perspective as their confession and guideline for their ministry.”

Camp Squeah executive director Rob Tiessen commented on a banner year in which two new accommodations at camp were opened. He also recognized the contribution of long-time head cook Eileen Friesen, who died unexpectedly in March.

Throughout the day, pastors from the three local area congregations—host Eden Mennonite, Crossroads Community Church of Chilliwack and Yarrow United Mennonite Church—shared how they live out their mission in their communities. Each in turn received a prayer of blessing.

Reflecting on completing his term, moderator Gerd Bartel likened leadership to coaching a sports team. “The team has been amazing,” he told the assembly, adding that serving “has been a great joy.”

Dan Rempel of Cedar Valley Mennonite Church in Mission will assume the moderator’s mantle for the next three years.

At the conclusion of the sessions, executive minister Garry Janzen thanked incoming and outgoing workers for their service. He urged everyone to “be aware of the Lord’s calling to the next assignment.” 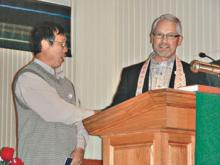