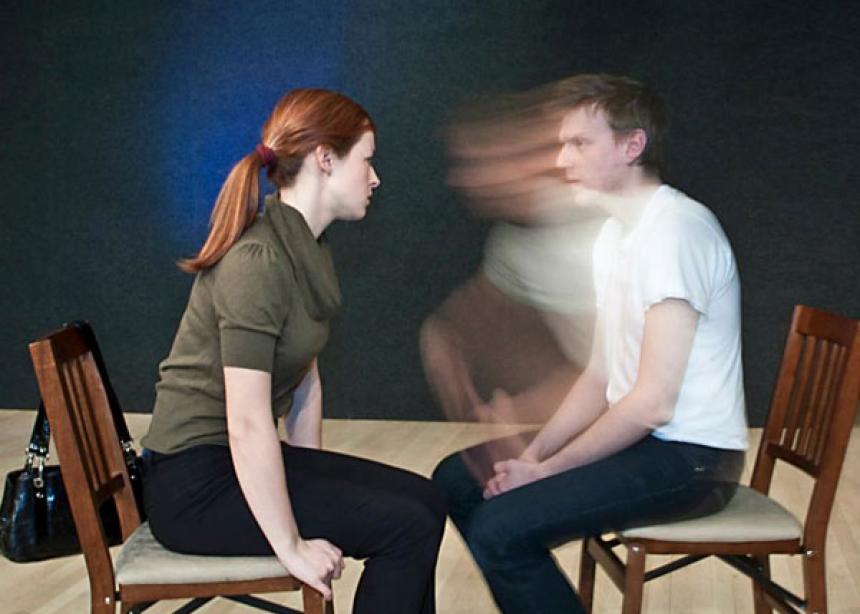 A scene from Forgiven/Forgotten, the latest play by the Toronto-based Theatre of the Beat troupe, which is on a cross-Canada tour sponsored by Mennonite Central Committee Canada. Pictured: Kim Walker and Johnny Wideman.

A bottle of wine moves through Forgiven/Forgotten, the Mennonite Central Committee (MCC) Canada-sponsored play about restorative justice that premiered last month at the Conrad Centre for the Performing Arts in Kitchener, Ont.

Theatre of the Beat actors play Phil and his wife Robyn, who receive the bottle as a wedding gift and save the vintage wine for a future celebration. At one point in the play, which involves a series of flashbacks, they are about to open it, but something gets in the way. That something is Phil’s imprisonment for an unnamed crime, and Robyn’s ostracism from her community and church.

Phil’s crime is not the only bit of information left hanging. Robyn finds her way into another church, where she is welcomed by Richard and Mary Anne, and by Pastor Darren, played by the same actor as Phil. Mary Anne is still suffering from anxiety attacks following a break-in at their home.

When Phil is released, he begins to attend church with Robyn, but the church finds this overwhelming, and Phil is asked not to attend until some unfixed future date. They will tell him after the Sunday service at which communion will be served.

The bottle of wine moves from Robyn’s hands to Mary Anne’s, as a hostess gift. Phil discovers it at their house when he and Robyn are invited over. Robyn and he argue and leave. Richard and Mary Anne leave the room and the table becomes the communion table where the bottle of wine becomes the blood of Christ.

Excellent use of sparse staging and props, as well as video footage of Phil and Robyn’s “son” (actually a young Johnny Wideman) playing, draw the audience into the story. The loose ends, together with the intense emotions raised with the impending “excommunication” and the past break in, catch the audience in the horns of a dilemma, feeling for both Phil and Robyn, as well as Richard and Mary Anne, who are all complicated and conflicted. And there the play ends.

The lights come up and the four actors, together with their producer and a behind-the-scenes member of Theatre of the Beat, and a member of MCC Ontario’s restorative justice staff, who take questions and enter into discussion with the audience around issues the play raises and does not answer. Each member of the audience has the opportunity to try on the feelings of various characters to understand what it would be like in their position. 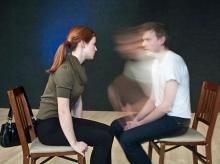 A scene from Forgiven/Forgotten, the latest play by the Toronto-based Theatre of the Beat troupe, which is on a cross-Canada tour sponsored by Mennonite Central Committee Canada. Pictured: Kim Walker and Johnny Wideman.