‘One small but important step in the right direction’: Jamie Arpin-Ricci 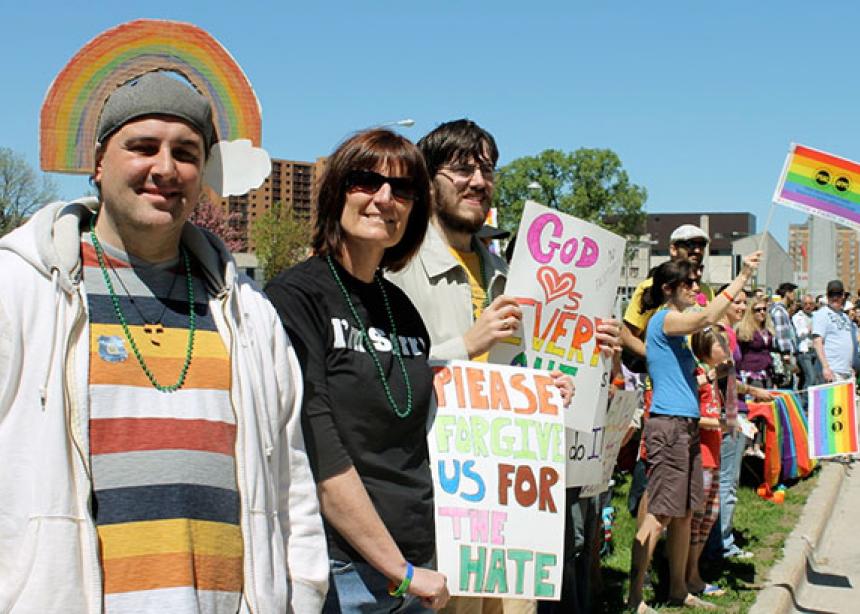 For the second year in a row, a group of Christians gathered in Winnipeg to say “I’m sorry.” They joined the crowds on the sidelines of the annual Gay Pride Parade in downtown Winnipeg on June 2 to convey their message of contrition.

“The I’m Sorry campaign is an international effort by Christians to make unqualified apologies to the LGBTQ [lesbian/gay/bisexual/transgendered/queer] community for the ways we have caused harm, and to show our commitment to making things better in tangible ways,” explained Jamie Arpin-Ricci, pastor of Little Flowers Church, a church plant of Mennonite Church Manitoba and Youth with a Mission in the West End of Winnipeg. “This is not about being affirming or non-affirming, but about saying we are sorry that we have not modelled the love of Christ as our primary witness to our LGBTQ neighbours.”

The community of Little Flowers spent several years in prayer and conversation before formally participating in the campaign last year.

“We understand that this is a difficult topic with some complex dynamics, but also that the need for generous space for relationship and reconciliation was essential,” he added.

Although MC Manitoba is not formally involved, several area church congregations participated, according to Arpin-Ricci.

“We were blessed by how we were received by participants in the Pride parade,” he said. “Many tears flowed, hugs exchanged and forgiveness gladly extended. However, perhaps the most impacting aspect has been what has come since the event. We have received so many deeply moving and encouraging e-mails from people thanking us for what we did. I believe this event is one small but important step in the right direction.”

Jeff Myall, media and communications director for Pride Winnipeg, welcomed the I’m Sorry campaign to the Pride festivities. “The apology by the campaign regarding the many years of social oppression from segments of the religious community is respected and appreciated,” he said. “Together we can strive against social inequalities and mistreatments, and work towards a society of understanding and respect for ourselves and our children.”

Whether Christians believe that homosexuality is a sin or not, Arpin-Ricci said that saying sorry is an opportunity to take responsibility for the real and devastating treatment that Christians have inflicted on gay people over the centuries. “Perhaps the most important thing we want people to know is that this is an opportunity to put aside the debate and simply do what Christ calls us to: to confess and repent of our sins, to be reconciled to others. As neighbours, we are called above all else to love.” l 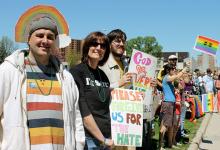 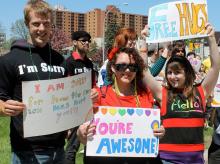 Sam Schalk, Jen Funk and Hannah Foulger share their messages at the Gay Pride Parade in Winnipeg on June 2.

Do you know of any ministries in Winnipeg that support Christian families of LBTBQ persons?

To Nicole, and others who might be interested. There are a number of options in the Winnipeg area for families of LGBTQ persons. Rainbow Resource Centre (ministry of the United Church) has a variety of services. The Pilgrim Group, an inter-denominational group, hosted by Bethel Mennonite, meets to care for families and individuals. There are also affirming pastors who would be willing to respond - please contact me directly for more information: lynell@hopemennonite.ca