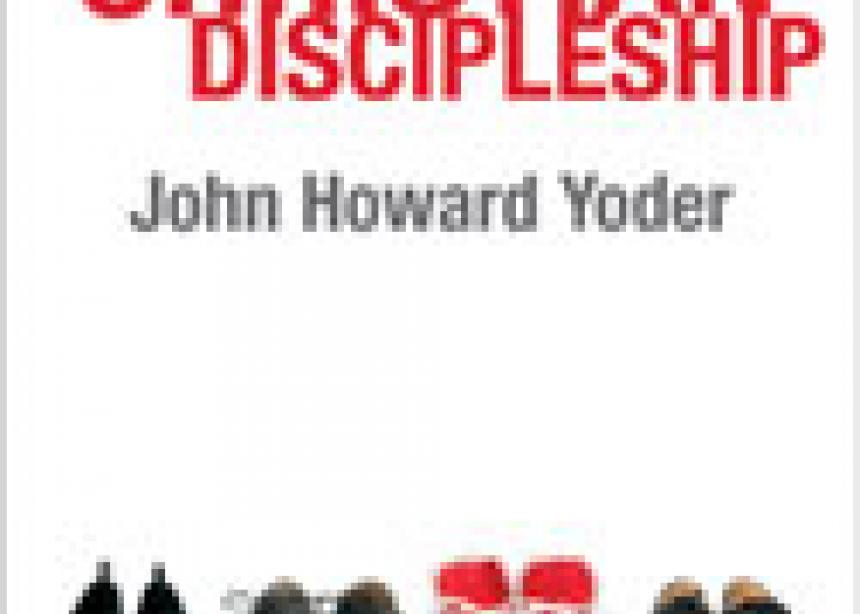 The late John Howard Yoder has long been recognized as an important Mennonite theologian, but his work has mostly been used by scholars and has not been readily accessible to the people in the pew.

But with In Radical Christian Discipleship, three Yoder scholars have put together previously unpublished sermons as well as articles from church publications in a collection designed for non-academics. While not presented as systematically as his academic work, this Yoder material is easier to read. It brings together some of what Yoder had to say to the church, providing new insight into his ideas about what it means to follow the way of Jesus.

The editors found so much interesting Yoder material that this is only the first of three such volumes.

The three parts of this book include five lectures Yoder gave at Goshen College in 1963, 12 articles he wrote for Gospel Herald and Christian Living in the 1950s, and three sermons and a commencement address from the late 1960s and early ’70s. Although much of this material is more than 50 years old, it remains relevant for today.

In each of these articles and lectures Yoder addresses the issue of how faithful disciples of Jesus should live. He asks hard questions about ethics and lifestyle, such as how faithful Christians should use their leisure time and what a proper Christian response to capitalism should be.

For Mennonites in the first half of the 20th century, nonconformity meant being separate from the world; it was a term that referred to Mennonite rules of behaviour and it invoked such things as distinctive dress and the avoidance of alcohol and movies. Yoder’s interpretation of nonconformity must have been startling to the traditionalists and refreshing to the young people of the day, as he brought a new way of thinking about what it means to follow Christ. In these sermons he declares that morality is not black and white, and that the Christian life is not a matter of rules.

Yoder’s ideas have been very influential in Mennonite churches that are now part of Mennonite Church Canada. Since the 1960s the old Mennonite dress codes have disappeared and most churches have moved away from the evangelical and fundamentalist theology of the early 20th century. The church has heard Yoder’s declaration that peace is not an appendage to Christianity, but an integral part of it. Mennonites have tried to take seriously Yoder’s challenge to live as radical Christian disciples.

Today the Mennonite church needs to hear Yoder’s words again. He does not espouse a soft and easy Christianity, saying instead that we must count the cost and follow Jesus into suffering. He warns of the dangers of national religion and the temptations of wealth. We are called to give and to serve, and to love and forgive, but we cannot expect our work to be recognized or even to be effective. Our path should be the way of the cross because that is the path Jesus has shown us. In the end it will lead to victory, for that is the wisdom and power of God.

Nice post. Yoder’s interpretation of nonconformity should have been startling to the traditionalists and refreshing to the young people of the age