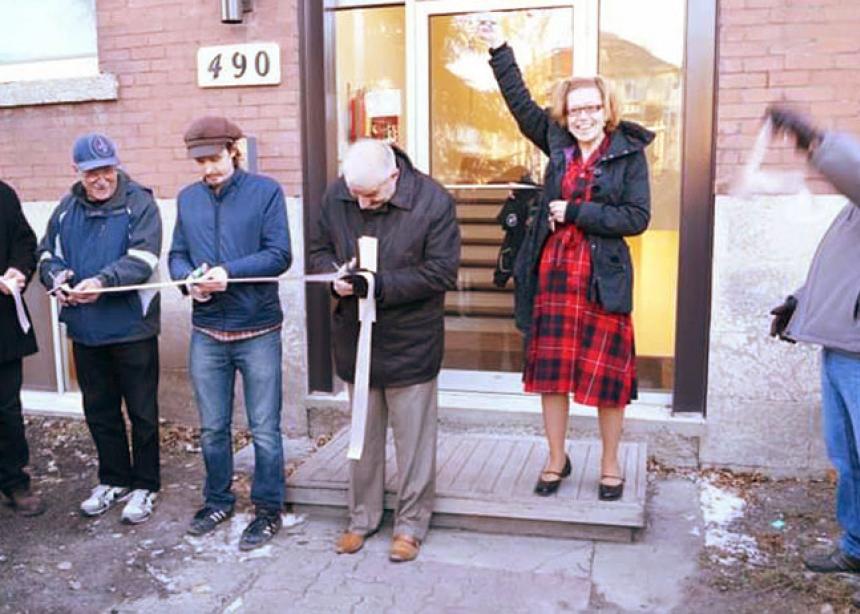 From this, a vision of a place that would provide affordable, safe, secure and dignified housing in the context of Christian community in this multi-ethnic neighbourhood began to develop through a partnership of Mennonite Church  Manitoba, Little Flowers Community, Eden Health Care Services, Eden Foundation and a not-for-profit numbered company formed for this purpose.

Homelessness in Winnipeg is a major concern. A University of Winnipeg study determined that, of the city’s  633,451 residents, 7,600 are “hidden’ homeless,” 1,915 are short-term or crisis-sheltered people, and 350 are living on the streets.

Searching for a building, Arpin-Ricci and Norm Voth, director of evangelism and service, for MC Manitoba, walked the streets of the neighbourhood.

“We found housing situations that were shocking and heart-breaking, and at times we were stunned and scared,” said Voth. “It re-instilled in us the need for this kind of space.”

Eventually they found a small three-storey apartment building that had been vacated because of a basement fire.

“A third of the residents are part of the core team from Little Flowers Community, who are there for the express purpose of being good neighbours and supportive to the residents and neighbours,” said Jon Owen, who, together with his wife, Joelle Kidd, are resident core team members. He described his role as that of caretaker of the physical building, but his caretaking extends well beyond the physical structure.

Approximately one-third of the rooms are designated for people living with mental health issues and the remaining are for those needing affordable housing. Two single mothers with their children, a married couple and several single adults now make Chiara House their home.

A common room is available for residents and is used for community meetings and Monday night potlucks. Laundry facilities, a hospitality suite, two full bathrooms and an office are in the basement.

Owen and Kidd share the office with Little Flowers Community, offering a pastoral presence in the building. The hospitality suite is intended to be a short-term place for an individual or family “who is in critical need of shelter and recommended by the mental health system, the police or one of the other shelters, or it can be used by residents for their guests, because the suites are very small,” said Voth.

“We’ve been blown away by the support of [MC Manitoba] and the people that have come alongside us,” said Arpin-Ricci.

Although the project had significant challenges and setbacks, including five break-ins and four arson incidents, “what was tremendously encouraging was the support from MC Manitoba congregations. In total, we had 20 congregations, some from outside MC Manitoba, involved. First Mennonite Church donated 365 days of volunteer labour,” said Voth.

On one level, the vision has been fulfilled, but in the day-to-day living out of the vision, “we are just figuring out how to do this. No one is doing it in this context,” said Owen.

“Recognizing the dignity and value and unique abilities of everyone, and seeing mental health as a continuum, and doing this in a housing context is like no other model that we are aware of,” added Arpin-Ricci.