The gathering is only one part of a larger movement that traces its roots to the 2003 Mennonite World Conference assembly in Bulawayo, Zimbabwe. There, as African women theologians led workshops and shared their experiences with others, Latin American women were inspired to form their own movement. 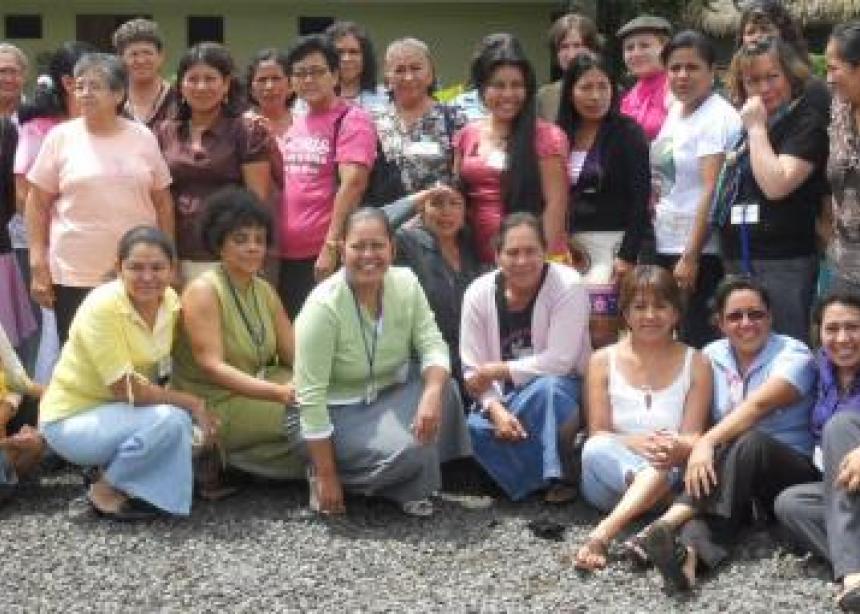 A sense of solidarity and fellowship took a leap forward September 6 to 8, at the third

Held on the eve of the 35th assembly of the broader CAMCA consortium (Consulta Anabautista Menonita de Centro America see sidebar), the gathering attracted 33 women associated with CAMCA. Two visitors from Mexico, which currently has no CAMCA members, and one from Brazil also attended.

The gathering featured addresses by Costa Rican speaker Silvia Regina de Lima Silva on the theme “Considering the role of Women in Church: New Biblical Paradigms from the Daily Routine,” along with Bible studies, sharing of experiences, and discussion of further directions for women doing theology in the region.

“Biblical and theological reflection from a woman’s perspective is a story that builds from the periphery,” reported Sandra Campos and Olga Piedrasanta in summarizing their insights from the sessions. “At church, a reflection has grown from the presence of women in the different ministries. It’s been a long process, even slow—but steady, diverse and very rich.”

During the sessions, participants identified challenges they face in their churches, including the use and misuse of power. As Campos and Piedrasanta worded one point of discussion: “As Anabaptist women, do we use service as power? Why serve others? Is that a way to dominate?”

The women formed a declaration that included six commitments to enhance the church’s mission, particularly in the lives of women: strengthen Bible study, promote dialogue on gender equality; promote models of leadership that reconcile the biblical with the contextual; promote further theological exchanges among women in various countries and organizations; “awaken and nourish” a spirit of sisterhood among women in leadership; and acknowledge the value of a women’s body as “sacred space.”

The gathering included the launch of a study book published by Guatemalan-based Anabaptist publisher, Ediciones SEMILLA. Entitled El mensaje liberador de Jesús para las mujeres hoy” (The liberating message of Jesus for women today). The book contains reflections, presentations, declaration prepared during the 2009 Paraguay gathering of the Anabaptist Women Theologians of Latin America, which commissioned the book. In addition, it includes eight guides for Bible studies that can be used in meetings of women and men who are committed in the building of God’s reign here and now.

At the conclusion of the conference, the group also appointed a new work team coordinated by Albania Molina of Honduras and including representatives of eight other conferences that belong to CAMCA.