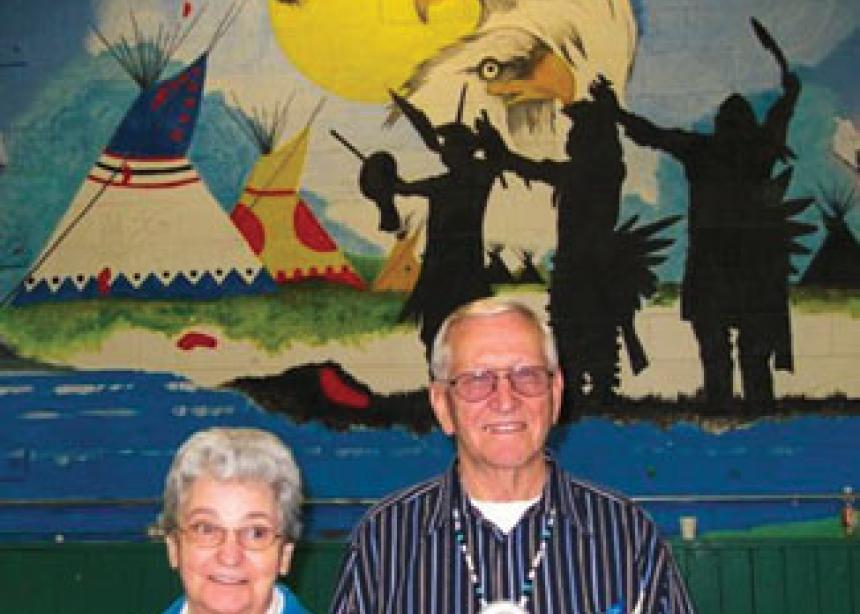 Alvin and Helen Lepp pose in front of a mural in the Siksika community hall, Alta., following an afternoon honouring them for their service to people of the First Nation.

Members of Siksika Nation and Mennonite Church Alberta gathered twice on May 2 to give honour to God for a lifetime of faithful ministry by Alvin and Helen Lepp.

With the faithful support of his wife, Lepp has been visiting Siksika Nation for more than 30 years, sharing God’s love through friendship and support during life’s good times and bad. Over the years he has led Bible studies, served as a lay leader in local congregations, and become friend and confidant to many in times of joy and loss.

In the afternoon at the Siksika community hall, Todd Munro, founder of Bridging the Gap Ministries, engaged the audience with stories of how Lepp had touched their lives. He spoke of recently visiting the Glenbow Museum, Calgary, and studying a picture of the signing of Treaty 7 in 1877 when his eyes were drawn to a figure in the back row. Pulling out a magnifying glass he said he was both “surprised and excited” to see that it was Alvin Lepp, a playful reference to the many years that he has been visiting the First Nations community.

Others commented on Lepp’s gifts over the years as a servant, inspiration, prayer warrior and a help during times of bereavement.

Dan Jack, a past member of the Mennonite Church Alberta Missions and Service Committee, told a story of travelling around the community one day with Lepp as he made his rounds. They drove onto one particular yard and observed a young boy at play. As soon as he saw the car approach, he ran to the house as if he was terrified. They quickly stopped the car and as they were getting out, Jack said they heard the young lad yell out to his family in the house: “Jesus is here!”

Neill and Edith von Gunten, co-directors of Mennonite Church Canada Native Ministry, also commented on this ministry of presence that Lepp has quietly gone about these 30 years. Neill calculated that Lepp had probably logged more than 750,000 kilometres of ministry travel, and in a brief meditation likened him to the tree in Psalm 1: “Planted by the water, it yields its fruit in season.”

In closing, they presented the Lepps with a cedar clock created by retired Native Ministry worker Henry Neufeld. It was offered as a reminder of the many times when “just a minute more” of time spent with someone in need stretched out to 45 minutes or more of storytelling and support.

The evening service at Rosemary Mennonite was attended by approximately 120 people. Once again stories of how Lepp had impacted lives on Siksika Nation were told.

Particularly moving were the stories of Herman Yellow Old Woman, who now serves as a band councillor. He was a 14-year-old boy when Lepp first befriended him, and he recalled how he and two siblings subsequently went to Swift Current Bible School, Sask., with Lepp’s help and encouragement. His mother, Eve Yellow Old Woman, spoke of the spiritual influence Lepp had on their family and finished her comments with a very moving prayer.

Lepp’s son Steve talked about another of his father’s ministry involvements: distributing Bibles and other Christian literature on the First Nation. Steve said his father had recently called him to ask if he could borrow a truck to pick up a shipment of Bibles from Calgary. Steve readily agreed and then Alvin asked whether they would have the use of a forklift to unload them. “A forklift to unload Bibles! I think not! I’m sure we can do it by hand,” was Steve’s reaction. When he got home from work the following day, though, Steve said the truck was full with a load of Bibles higher than the cab and the springs were down to the axles! 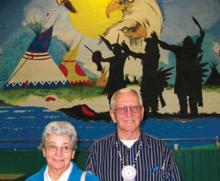 Alvin and Helen Lepp pose in front of a mural in the Siksika community hall, Alta., following an afternoon honouring them for their service to people of the First Nation.

I have 1st met Alvin Lepp when I was 11 and I am now 31. He is a very kind man, he has taught me a lot about Jesus in my studies as a child and I am now teaching them to my kids. And we also had a good talk after the flood in 2013. And I'd like to met with him again.