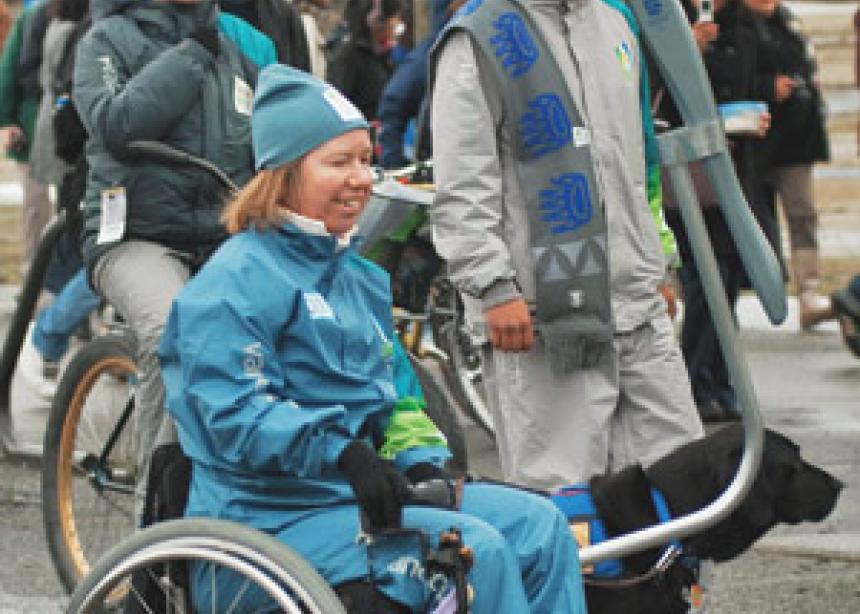 When Bonnie Sawatzky rolled her wheelchair down the student union plaza hill just after lighting the Paralympic torch at the University of British Columbia (UBC) in Vancouver last month, she remembers a crowd of people surrounding her. “Go, Bonnie, go!” they yelled.

“It was the most amazing experience and quite an honour,” recalls Sawatzky, a member of Peace Mennonite Church, Richmond, B.C., and associate professor of orthopaedics at UBC. “My friends, family, and students from my lab and class came out to celebrate with me. I felt so special.”

With controversy surrounding the millions of dollars spent on British Columbia’s hosting of the Olympic and Paralympic Winter Games, and with some Mennonites wondering if the games’ inherent emphasis on nationalism and winning are in line with a Christian worldview, Sawatzky has her own opinion.

“The games are about celebrating abilities,” she says. “Yes, it’s expensive, and we, as Mennonites, are socially conscious of this fact. However, if one considers the immense expense of [different] countries’ war efforts, the Olympics is much less expensive and brings the world together to celebrate their athletes and just enjoy some competition.”

Sawatzky also notes that a spontaneous spirit of fun and celebration in Vancouver surrounded the games: “For Canada, it brought us together. The world needs reasons to come together and put aside their political differences for a change.”

For Sawatzky, carrying the flame was a memorable and thrilling experience that represented the spirit of the Olympic and Paralympic Games (the latter are elite sporting competitions for athletes with disabilities that follow the international Olympic Games in the same city). She reminds herself, “It’s not about me, it’s about the Olympians doing these amazing things. Whether they recognize it or not, God gave these [athletes] the gift of abilities and the flame symbolizes that spirit. We are amazing creatures of God.”

Sawatzky first learned about her potential involvement through a phone call from the Paralympic Organizing Committee last Christmas Eve. “That was a Christmas present in itself,” she admits.

Just as the torch for the Olympics travelled across Canada, so did the Paralympic torch. The flame had come from Greece to Ottawa, and then went to Montreal and Toronto before coming to B.C. The last day before the Paralympics began, the flame arrived in Vancouver and Sawatzky was the first person to carry it that day. Each torchbearer carried the flame a distance of 300 metres.

Although not active as an athlete now, Sawatzky did participate in sports in earlier years. “I loved cycling and swimming prior to a car accident in 1993,” she says. “However, I was born with a birth defect called arthrogryposis, a spinal cord disease similar to polio. It affected my hands and feet. I competed in the B.C. Summer Games and also did a triathlon for fun. In 1993, I had a car accident which [injured] my hip and generally left me very weak, so I now use a wheelchair to get around outside of home.”

Sawatzky used to run with her first service dog, Phoenix, who has since passed away. She is also a member of the Disabled Sailing Association.

A member of the UBC Faculty of Medicine, Sawatzky does research in the field of spinal cord injury. She also leads a provincial network called the Disability Health Research Network. 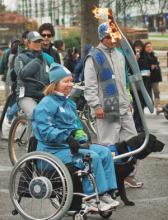