Caring about how we deal with our money 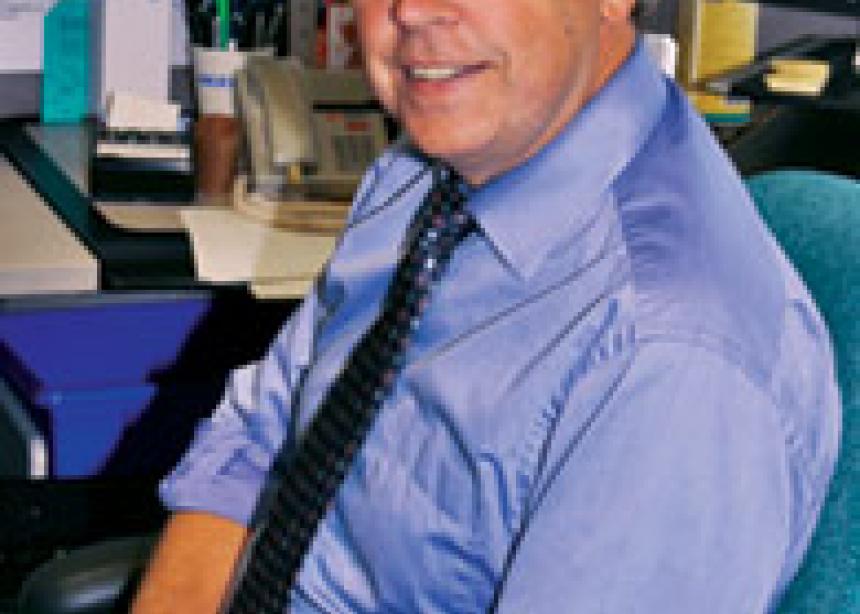 Brent Zorgdrager’s surname translates from Dutch to English as “sorrow carrier or caregiver,” an apt description of the new chief executive officer of Mennonite and Savings Credit Union.

Zorgdrager had been an assistant vice-president and CFO of group retirement savings in the Canadian division of a large insurance company before coming to the credit union as its chief financial officer in 2006.

Zorgdrager builds his key beliefs of integrity, compassion and responsible stewardship on a Christian core centred in a relationship with Jesus Christ. These values must be lived out as an example to his children and others around him in peacemaking and social justice.

He believes he learned much from his former insurance job, including that he wanted to “be an encourager of my team,” a “servant leader.” But he wanted his next employer to be a place where his faith and values would be more aligned with his work. Now overseeing the eight branches, 135 employees and more than $750 million in assets for the 17,000 members of the  faith-based credit union is a responsibility he takes seriously.

Before he made the move to the credit union, he had already served on its council of members and  board of directors, as well as on the board of Meritas Mutual Funds, which offers socially responsible investment opportunities that specifically incorporate Mennonite values.

“I knew about as much as I could as an outsider before becoming an employee as you could, to try and assess an organization,” he says of his decision to seek employment with the credit union, after he found the increasing time demands for work at the insurance company were leaving less time for his family.

Zorgdrager grew up in the area and received his bachelor of business administration degree from Wilfrid Laurier University, Waterloo, Ont. He subsequently also qualified as a chartered accountant, something which he says “has been foundational to my technical and leadership qualifications and development.”

One of the first moves of which he was a part as new CEO was the change from a “closed” membership charter—one had to be a member of a Mennonite, Brethren or Amish congregation—to a more open and invitational charter. Prospective members are now told what the institution stands for, including the seven “shared convictions” now being used by Mennonite World Conference. Before joining, people are invited to affirm these convictions.

“This has raised our obviousness as to our faith, and has raised the level of discussion across the institution and the awareness of the staff of what we do and why we do it.,” Zorgdrager says. “We are very pleased that our staff have embraced this. . . . While some potential members have chosen to not join, as this was different from what they expected, overwhelmingly potential members from a variety of church conferences have readily supported what we stand for and enthusiastically joined us. . . . The things that members feared, we have found the exact opposite; in fact, we have so much discussion about [faith issues] now at so many levels and in so many places.”

Zorgdrager’s involvement in Meritas Mutual Funds is another place where he sees the credit union providing members with a way of matching their money and investments with their faith. He wants people to be thinking not only about the financial return on their investments, but also about the social consequences of where they invest their money.

His three children, aged 14, 17 and 20, prompt Zorgdrager and his wife to wonder how they will communicate their values of community and mutuality to future generations. His own move to working at the credit union was for him a move from focusing only on “me” to focusing on a community and caring for the larger world. This is both a challenge and an opportunity, he admits.