‘Can we trust the government?’ 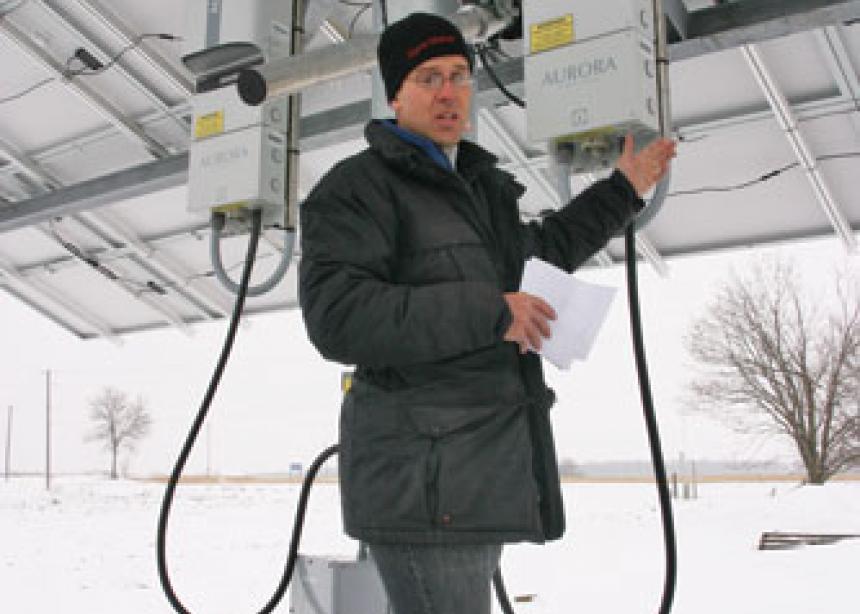 Rob Yost of Hillcrest Mennonite Church stands at the base of the congregation’s one-kWh photovoltaic solar-energy system.

Nearly a year after receiving an award from the Waterloo Region’s Greening Sacred Spaces organization, Hillcrest Mennonite Church in New Hamburg was the site for a Mennonite Central Committee (MCC) Ontario solar open house on Feb. 26.

Hillcrest has installed a ground-based, one kilowatt-per-hour (kWh) photovoltaic array. Originally the brainchild of Rob Yost of Hillcrest, it was part of the congregation’s dream to use less energy both in regard to saving money and as a way of caring for creation by reducing its carbon footprint. Although Pastor Jan Steckley feels like the whole process moved rather quickly—the congregation only voted last January to do this—the road was not without bumps and potholes.

Part-way through the process, the Ontario government changed the rules for who could install such systems and the rate paid to producers for their electricity, leading the congregation to wonder, “Can we trust the government?”

While the system had a significant start-up costs, the 80.2 cents per kWh paid out by the government for the electricity produced means that the array can pay for itself in as little as 10 years, long before the system’s life expectancy will run out.

The provincial program has been very popular—there are similarly sized units within sight of Hillcrest—so the church’s installation was delayed until early February of this year. But within days it was connected to the grid and producing electricity.

On the day of the open house, which was cloudy and snowy, the unit was still producing about 20 percent of its peak potential.

The congregation was able to borrow all of the costs of the project and expects to begin earning an income that will be used both for the congregation and potential projects to help others. Hillcrest has also installed more energy-efficient lights and hot water tanks, programmable thermostats and insulation, and has educated custodial staff on how to save energy.

More than a hundred people attended the open house, where they saw the unit in action, considered energy poverty, and talked with representatives of Greening Sacred Spaces (a not-for-profit organization dedicated to helping churches and other religious groups improve their use of energy by upgrading their buildings) and the Residential Energy Efficiency Program. They were also able to talk with a number of vendors of solar, wind and water energy technology about their products.

Rob Yost of Hillcrest Mennonite Church stands at the base of the congregation’s one-kWh photovoltaic solar-energy system.