December 24, 2014 | God at work in the Church | Number 1
Story and Photo by Donna Schulz | Saskatchewan Correspondent 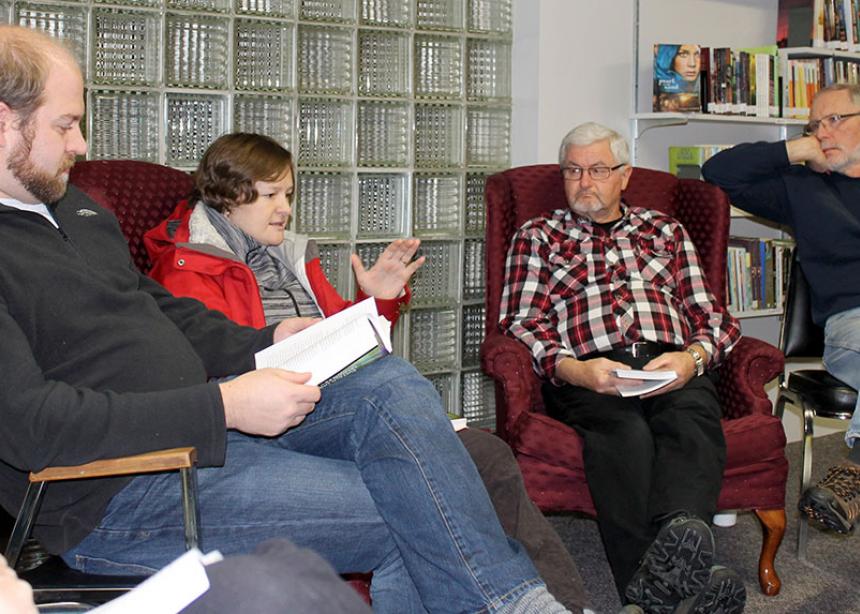 The book they discussed was Buffalo Shout, Salmon Cry, a collection of essays, poems and readings by both indige-nous and settler writers. Published by Herald Press, the book is edited by Steve Heinrichs, Mennonite Church Canada’s indigenous relations director.

Eric Olfert, who serves on MC Saskatchewan’s Ministries Commission and is part of the ad hoc Walking the Path Committee, led the discussion. Olfert had been part of a similar group in Mount Royal Mennonite Church last winter. He said that experience “forced me to read at a deeper level,” and motivated his willingness “to help the broader MC Saskatchewan constituency work with the book.”

On average, 12 participants attended each of the five meetings held between Oct. 9 and Dec. 4, 2014. Most were members of the MC Saskatchewan congregations nearest the Beardy’s and Okemasis First Nation, namely Rosthern, Eigenheim and Tiefengrund Mennonite churches.

“The Walking the Path Committee started with a focus on encouraging our constituency to grow in relationship with the Beardy’s and Okemasis First Nation, so it seemed good to do this discussion in a place easily accessible to constituents for whom Beardy’s [is] their closest first nation,” said Olfert.

Even with that goal in mind, the discussion was not intended to be a time of dialogue between the people of Beardy’s and their Mennonite neighbours. Rather, it was to be a time of learning and preparation, which might set the stage for future dialogue.

Each meeting saw the group discuss two chapters in the book, one from a settler perspective and another from an indigenous point of view. The final session included a look at Derek Suderman’s essay, “Reflections of a Christian settler in the Haldimand Tract,” and Daniel R. Wildcat’s piece, “Just creation: Enhancing life in a world of relatives.”

Cheryl Woelk suggested, “We need to ‘complexify’ things before we can begin to understand,” adding, “Part of the journey of reconciliation is being able to sit with the discomfort.”

Olfert countered, “Complexities don’t absolve us of our responsibilities.”

Ryan Wood agreed, saying that one of the things he teaches his native studies students at Rosthern Junior College is that “we’re all treaty people” and “we need to hold up our end of the bargain.”

The idea that settlers can solve the problems that exist between the races comes out of “our colonizer arrogance,” said Larry Epp. Solutions to these complexities need to come from the colonized people themselves, he said. “Until they tell us what the solution is, we’re really just blowing smoke.”

One thing settlers can do, said Craig Neufeld, pastor of Rosthern Mennonite, is to recognize evidence of empire in their culture and ask themselves, “What are ways we can challenge the empire?”

Garth Ewert Fisher, pastor of Mount Royal Mennonite Church, suggested, “We can paralyze ourselves with phony guilt or we can take a stand against the system we’re part of.”

Olfert was pleased with the level of interaction within the group.

“It felt like we were able to encourage each other to grow in our understanding [of], and engagement with, the issues,” he said. He said he also found there was “a gratifying openness to study other books that had been referenced during this study.”

Ideally, Olfert would like to see the conversation continue at the congregational level, with participants sparking or leading similar discussions in their own communities.

For more information about the book, see "Diverse voices speak out"