“I hope that history will show me as a bridge person who was committed to take the seminary to a new stage, aspired to make the seminary a respected part of the larger university and active partner with the sister seminary AMBS, and worked at greater unity in the Mennonite family in North America.” 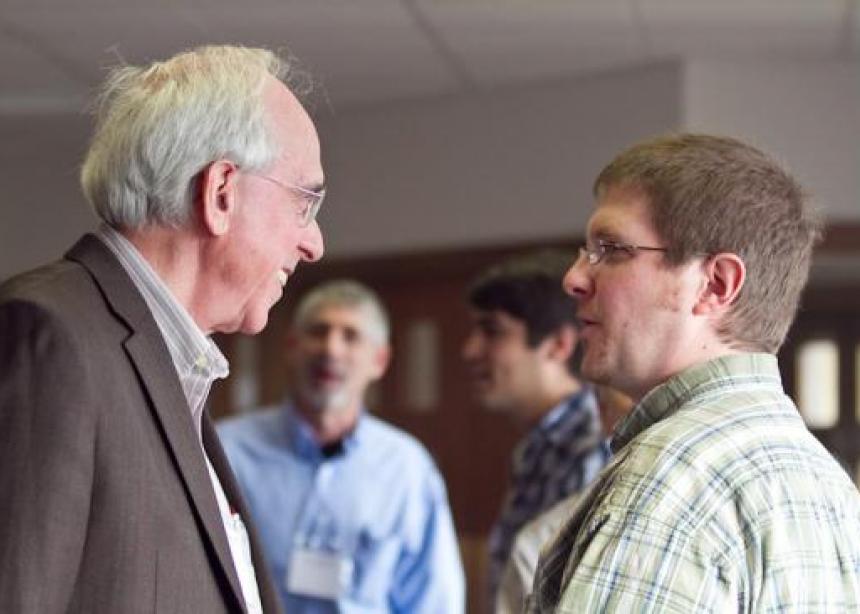 When George R. Brunk III joined the Eastern Mennonite Seminary faculty in 1974, little did he imagine that three short years later he would be named dean.

“My title those first two years was acting dean,” said Brunk. “That title was appropriate, since I had no prior experience in educational administration. After ‘acting’ the part successfully for two years, I became dean.”

At first, the dean role was half time. Brunk spent the other half pursuing his true love, teaching.“I often threatened to post a notice on my dean’s office door that I’d rather be teaching, but I never did,” he said.

“We focused on Galatians, and I learned the importance and delicacy of every word,” Horst said. “Every word adds to the beauty of God’s word to his people and to ‘pictures’ we have of God’s people in that time. I was like a sponge soaking it all in.”

Former students remember Brunk’s dry sense of humor, the particular way he pronounced the word “pericope,” which means a small unit of biblical text, and the warm way he related to students.

“George was more than a professor,” said Kevin Gasser, ‘08 “He was a pastoral presence in the classroom and outside.”

Aaron Boggs ‘06 said, “George was my academic advisor. He was so encouraging. I wouldn’t have traded him with anyone.”

While Brunk didn’t always relish the administrative side of his role at EMS, he led the seminary into a new era.  During his tenure, the seminary doubled in enrollment, added the formation program, which is now a key component of education at EMS, and received full accreditation, which allowed EMS to attract students from a broader range of denominations.

“Naturally, given the length of my stay at EMS, I have seen a complete turnover in the faculty,” Brunk noted. “This generational change obviously brings new perspectives and new interests. The seminary has become more diverse in its composition and orientation.

“You can no longer easily put EMU and EMS at a particular point on the spread of Mennonite thought and life,” he stated.

Brunk also guided EMS and the larger church through a change in attitude about the need for theological education.

“EMS has primarily served the more traditional Mennonite churches in the eastern part of the U.S.,” said Brunk. “Many of these congregations have been slower to appreciate the value and importance of formal pastoral education. A major goal of my leadership is to bring about a healthy change of attitude and practice on this point.”

In 2009-10, Brunk was asked to serve as interim president for Associated Mennonite Biblical Seminary, EMS’ sister seminary in Elkhart, Ind.

“It recently occurred to me that I have had the good fortune of experiencing all levels of seminary life – student, faculty, dean and president,” said Brunk. “The invitation to serve as AMBS president was a complete surprise.”

“Perhaps a key factor was marriage to the widow of a former AMBS leader. History is full of examples where marriage opened the way to surprising political changes!” Brunk quipped.

Alicia Horst ‘06 remembers when Brunk started dating Ruthann Miller, whom he married in 2005. “He confided to the Interpreting the Biblical Text class that he was meeting up with a lovely lady in Indiana. How he trusted us with that information is beyond me.”

“The experience as president of AMBS confirmed for me what I observed earlier,” Brunk said. “There is an increasing amount of homogeneity among our Mennonite schools, including the seminaries.”

Asked what legacy Brunk hopes to leave as he retires, he replied, “I hope that students remember me as someone who loved the material being studied, the scripture and its interpretation, and tried to make that love contagious.”

Then, he added, “I hope that history will show me as a bridge person who was committed to take the seminary to a new stage, aspired to make the seminary a respected part of the larger university and active partner with the sister seminary AMBS, and worked at greater unity in the Mennonite family in North America.”

Brunk will continue to teach Greek Exegesis and Interpreting the Biblical Text this fall.  He is finishing his commentary on Galatians for the Believers Church Bible Commentary series.