‘Bring the wall down’

Edmonton artist seeks to get past ‘arbitrary impediments’ 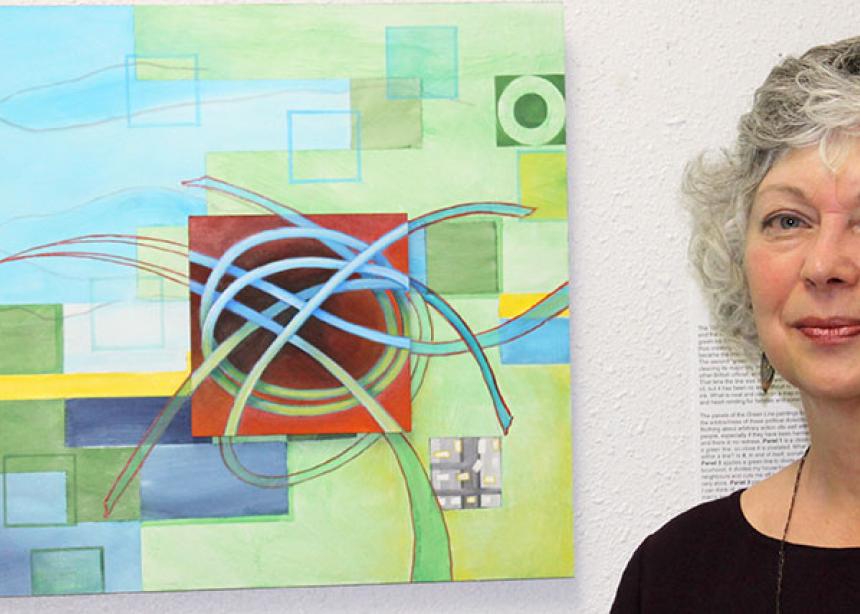 Rhonda Harder Epp stands beside the final panel of ‘Green Lines,’ where the image of barbed wire unravelling leaves observers with hope for the eventual removal of barriers.

“Walls became an obsession when I went to Berlin in 2010,” artist Rhonda Harder Epp told the crowd at the opening of her Walls: Arbitrary Impediments art exhibition at King’s University College, Edmonton, last month.

In a series of more than 30 oil paintings and paper sculptures, Harder Epp explored ideas of how the barriers people erect physically and emotionally affect individuals and the world. Doors and ladders and ways around obstacles are simultaneously obvious and subtle throughout the works, drawing observers to linger and wonder if there are paths through the darkness and difficulties humanity continues to build, both individually and corporately.

In her address, Harder Epp referred to what she has written about the exhi-
bition on her website: “The paintings in the Walls series are meditations of the idea of separation, arbitrariness and emotional distress, our experience of being separated from our people, our land or our deepest desires. . . . I ruminated and imagined. And maybe with the final panel of ‘Green Lines,’ the barbed wire unravelling, I came to a wishful resolution.”

Abe Janzen, director of Mennonite Central Committee (MCC) Alberta, spoke for a few minutes, reflecting on the tragedy of the many old walls that continue to stand between people and the new walls still going up. In a trip to Lebanon, Iraq and Jordan last November, Janzen noted the growing walls between various Muslim groups and between the West and Islam.

He named physical walls, such as the ones between the U.S. and Mexico, between Israel and the West Bank, and between India and Bangladesh, that all entrench division and misunderstanding. Quoting from Marcello Di Cintio’s 2012 book, Walls: Travels Along the Barricades, he told the audience that research has shown people living near the Berlin Wall had increased incidences of both mental and physical illness: “The only cure for ‘wall disease’ was to bring the wall down.”

Asked why MCC Alberta might seek to partner with a visual artist, it became clear that the fit for this event felt natural for everyone involved.

Heather Prior, a biology professor at King’s University, attends Edmonton First Mennonite Church with Harder Epp and suggested her work for one of the institution’s quarterly exhibits.

Daniel vanHeyst, associate professor of art and drama at King’s, said, “The [MCC Alberta] leadership is familiar with King’s, and that made it a natural fit” for King’s to host the exhibition, since both organizations are keenly interested in matters of social justice.

Adrienne Wiebe, program coordinator for MCC Alberta in Edmonton, said, “The beauty and the power of the imagery and ideas really spoke to me.”

“Walls: Arbitrary impediments” is open for viewing at King’s University College until March 10. For those not able to attend, Harder Epp’s work can be viewed online at http://bit.ly/1LUKQ7g.

Rhonda Harder Epp stands beside the final panel of ‘Green Lines,’ where the image of barbed wire unravelling leaves observers with hope for the eventual removal of barriers.