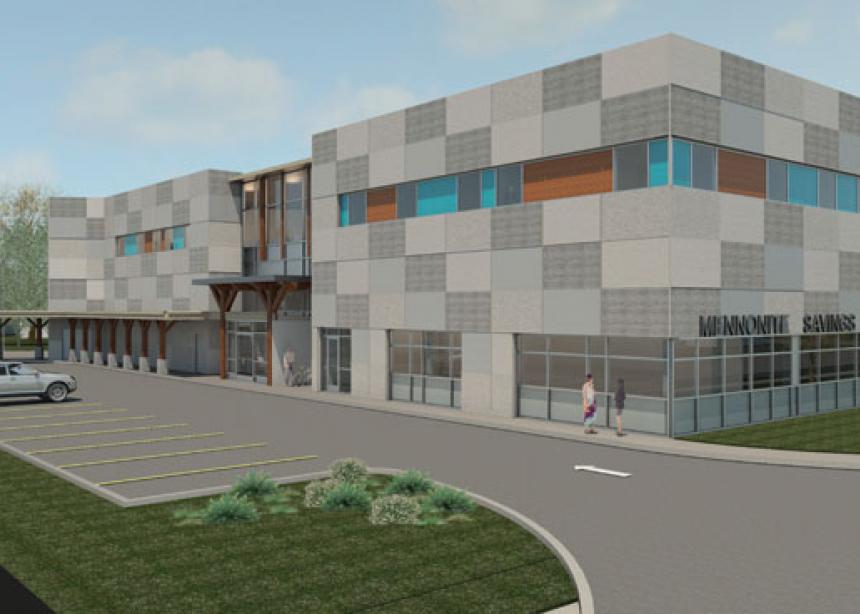 An artist’s drawing of the proposed MCC Ontario building.

The new $12-million complex Mennonite Central Committee Ontario (MCCO) is building in Kitchener will fit the more-with-less ethos, says Rick Cober Bauman, MCCO’s executive director. “But,” he adds, “it is still clearly sending a message that we are a serious player in relief, development and peace; and we’re not hiding.”

MCCO will occupy roughly a third of the building. An amalgamated and expanded version of the two thrift stores in the area will occupy another third. And the remainder will be used by Mennonite Church Eastern Canada, Mennonite Savings and Credit Union, Mennonite Foundation, MennoMedia, MennoHomes and possibly Mennonite World Conference (MWC).

The building is designed to be highly efficient in its use of energy and water. Further efficiencies will result from shared lobby space, washrooms and meeting space. It will sit on the site of the current MCCO office, which is currently being demolished.

The project is part of a national Mennonite building blitz. MCC BC is preparing for a $16-million project, Conrad Grebel College has started an $8.7-million expansion and Canadian Mennonite University just announced an $11-million project.

Back in Kitchener, sitting in the basement of an under-utilized church building where MWC now rents space, Len Rempel says the organization would like to be part of the community in the new complex, but they have to consider the costs from the perspective of MWC members in poorer countries.

“We have to be sensitive to our constituency in a global context,” he says. MWC has not made a final decision.

Cober Bauman admits that in the context of global need, the $12-million capital project—dubbed “Raising Hope”—“doesn’t compare with lots of places in the world where MCC works.” This “grates” on him, he says. But he believes it will enable MCCO to “grow” its capacity to address poverty and injustice.

The anticipated growth is expected to come primarily through a projected increase in thrift sales, more room for material aid responses, and a stronger public “witness” because everyone who walks in the front door—most notably thrift shoppers—will be exposed to the work of various Mennonite agencies via displays in the atrium lobby and their presence in the building.

As for thrift sales, the two stores in the area forwarded $354,000 to MCCO in 2011. That number is expected to double, based on other thrift store expansions. The new store will maintain the current level of earnings to MCCO and use the anticipated revenue increase to pay off its share of the mortgage—roughly $4 million. Cober Bauman expects this to happen within 10 years.

But even if more space can provide the predicted benefits, does the space need to be a high-end new facility? Does that fit an organization that works with impoverished people and has a reputation for frugality?

Ron Mathies—former director of MCC Binational and chair of the “Raising Hope” capital campaign—is not worried about the project negatively affecting MCC’s reputation. He believes a vibrant and visible cluster of Mennonite agencies will “expand the witness” of MCC. “It’s not going to come across as a high-end building,” he says. But at a cost of about $235 per square foot, the building is in the premium range for new office space in the area, even though part of it will just be warehouse.

“I think it’s safe to suggest that this was not the most affordable solution available,” says Marcus Shantz, who manages Mercedes Corp., a small commercial landlord in the Kitchener-Waterloo area.

“A lower-cost option would have been to simply give up on the idea of bringing everyone under one roof,” he says, suggesting that individual agencies could have probably found more affordable space to buy or rent. But Shantz adds that he is not close to the project. “Maybe there are other factors that justify the expense,” he says.

Cober Bauman says MCCO did consider a range of options. In defending the scale and nature of the project, he says, “we would penalize ourselves for the next several decades if we don’t do something fairly ambitious and fairly bold now,” he says. “I don’t think it is out of step with who MCC is,” he adds.

No naming rights will be sold.

Both Cober Bauman and Mathies insist the project will not cut into donations to MCC programming, though the fact remains that this once-in-50-years ask—as Mathies frames it—is for bricks and mortar, not MCC programs.

While both men support the more-with-less ethic that has typically characterized Mennonites, Cober Bauman adds that another part of the Mennonite ethos is that “we can raise money for capital projects.” While some people might argue that the two characteristics are at odds, with all the millions Mennonites are spending on new buildings, it’s hard to argue with Cober Bauman’s assessment.

An artist’s drawing of the proposed MCC Ontario building.