Breaking down walls in the name of Christ 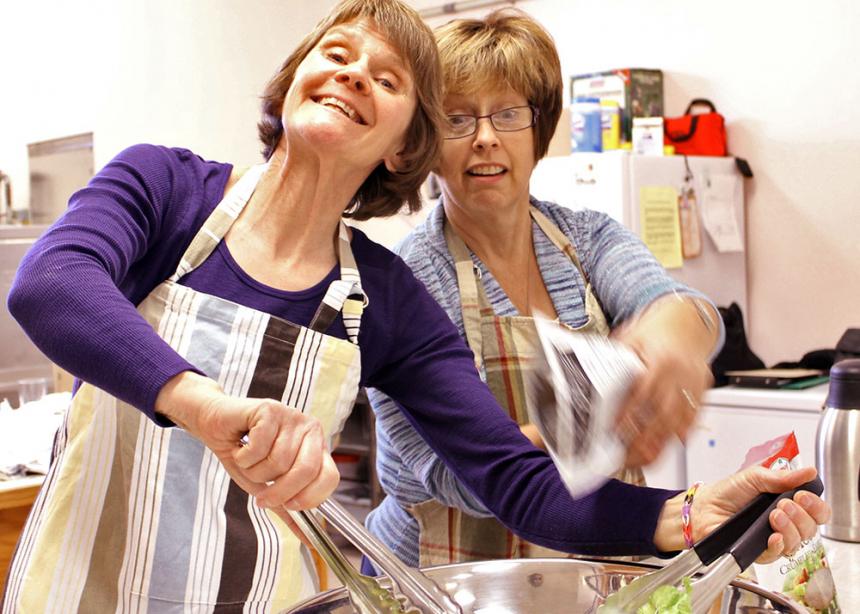 “As a child, I didn’t see the wall,” Arlyn Friesen Epp told delegates to the 85th annual Mennonite Church Alberta assembly, as he spoke of growing up in small-town Saskatchewan with no real knowledge of, or connections to, first nations people other than negative stereotypes.

Cheryl Bear-Barnetson, Friesen Epp’s co-presenter at the March 21-22 assembly, is the opposite of those stereotypes. From the Nadleh Whut’en First Nation in B.C., Bear-Barnetson has a doctorate of ministry and is an accomplished musician and pastor. Her personal experience facing the wall of racism and her extensive research has shown how correct information and good relationships break down walls and allow people to hear and learn from each other across cultures.

The assembly theme, “Brothers and sisters in Christ: Christ breaks down the walls,”  was anchored firmly in Ephesians 2:14: “For he is our peace; in his flesh he made both groups into one and has broken down the dividing wall, that is, the hostility between us.” It would prove a timely message for Alberta, as the next weekend Edmonton hosted the final national event in the Truth and Reconciliation process.

At a surface glance, there didn’t appear to be significant walls at the assembly. It progressed well, with the usual good food, conversation and business speeding by in a blur of information and ideas.

If one listened closely, however, walls were evident both in how they are being dismantled and in those left standing. Violence in Sudan and racism in Canada are two walls that members of the Edmonton South Sudanese Mennonite Church have first-hand knowledge of. When the church was accepted into full MC Alberta membership, these walls were seen to be crumbling.

Tabitha Mut, a church delegate, spoke to the assembly in her native language, Nuer, while another translated. “You have to know, you plant a seed for us. . . . The seed you plant for us is the love of the Heavenly Father,” she said.

Rueben Tut added, “We want to get the peace we missed, and we can get that in a Mennonite church. . . . This is how God wants us to be: different colours, different cultures, all one in God.”

While the assembly rejoiced at the acceptance of a new congregation, there was also loss at the formal withdrawal of Rosemary Mennonite Church from MC Alberta.  In his written report, Ernie Engbrecht, area church chair, said, “We are saddened that our friends at Rosemary have chosen a different path, but we wish them God’s blessing as they proceed without [MC Alberta] in their future.”

Don Stoesz, chaplain at Bowden Institution, was recognized for 30 years of service ministering to ex-offenders who are often forgotten and reviled by society. For a number of years, MC Alberta has managed Stoesz’s contract, receiving  government money to pay his salary. In 2014, chaplains will be salaried by another organization, but MC Alberta will continue to hold Stoesz’s ministry credentials.

Finances were an obvious wall the assembly was forced to address. The proposed budget, with a deficit of $39,266, was passed with the understanding that reserve funds will cover the deficiency in the short term.

A proposal to continue Donna Entz’s relationship-building ministry with Muslim Somalis and establish a faith community in Edmonton, was reduced from a three-year commitment to only one year, with the hope that some other funding, possibly from Mennonite Central Committee, might be found.

Camp Valaqua, representing the biggest chunk of MC Alberta’s budget), at $86,423 (approximately 29 percent), reported a second consecutive 10 percent increase in camper numbers; 45 percent of the 339 campers in 2014 have no other church connections. Valaqua will continue its cabin replacement program this summer with the building help of Mennonite Disaster Service. A resolution to increase MC Alberta’s credit limit to the camp to $50,000.00, to cover materials, was passed.

At one point in the discussion, Engbrecht reminded assembly delegates that Alberta is a small area church, with no office and few staff. “Other than camp, we have one half-time employee [area church minister],” he said. “Most of us on the executive work 45 hours a week and we do this on evenings and weekends.”

The comment reminded people of another wall: the limited resources of time and skills.

Asked how he felt about the 2014 assembly, Engbrecht replied: “I felt good about things. We’ve got some real challenges ahead. I’m concerned, but I’m also optimistic.” 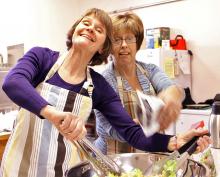 Dan Graber, MC Alberta area church minister, left; Elias Miranda, pastor of Word of Life Mennonite Church, Calgary; Thomas Pham, pastor of Edmonton Vietnamese Mennonite Church; and Jon Olfert, Camp Valaqua director, lead the 2014 MC Alberta assembly delegates in a time of remembering those who have passed away in the last year, and celebrating those who have joined MCA through baptism. (Photo by Donita Wiebe-Neufeld)

Cheryl Bear-Barnetson poses with a copy of her 2013 book, Introduction to First Nations Ministry, at the MC Alberta assembly. (Photo by Donita Wiebe-Neufeld)