Blanket exercise plums the depth of injustice to aboriginals 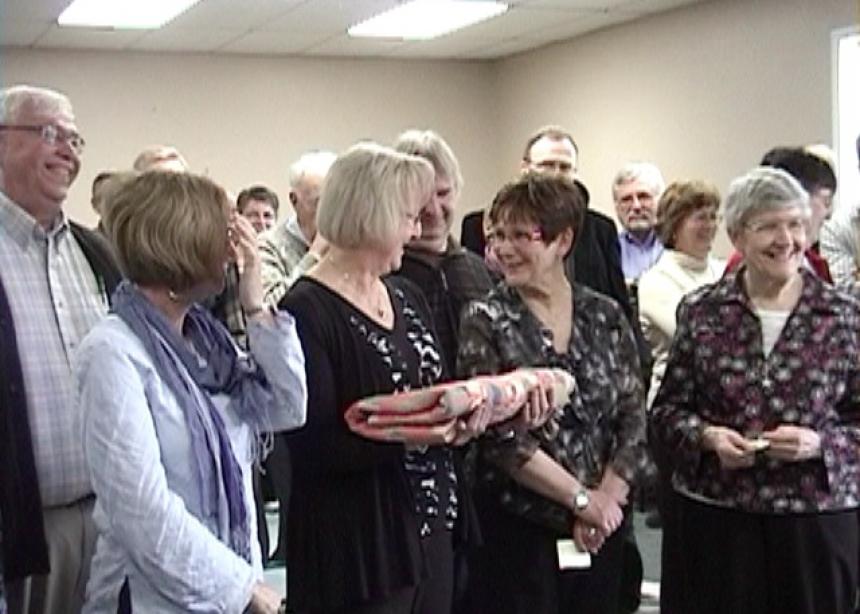 <p>Hilda Epp, holds a blanket symbolizing the exposure to new diseases (small pox, tuberculosis, measles) that arrived with the European settlers on Turtle Island—an aboriginal term for North America—as Diane Tiessen looks on. On the far left is Denise Bartel and on the far right is Eve Klassen. (Photo by Dick Benner)</p>

Early relationships between European settlers and aboriginals were characterized by cooperation and interdependence, John Bartel, a farmer from Drake, Sask., and a member of Mennonite Church Saskatchewan’s Ministries Commission, told a crowd of 75 huddled on 12 blankets representing Turtle Island—an aboriginal term for North America—during a session leading up to the area church’s annual general meeting in North Battleford.

But that amicable feeling didn't last long because of an edict issued in 1493 from Pope Alexander VI that established Christian dominion and subjugation of non-Christian “pagan” peoples, with Spain granting explorers the right to conquer and “own” any land they explored.Non-Christians could no longer own the lands and indigenous people were to be placed under the tutelage and guardianship of those Christian nations that “discovered” their lands.

The two-hour exercise, developed by Kairos and covering five centuries of Canadian history, was planned by the Ministries Commission to sensitize delegates to the specifics of the historical narrative that often eludes well-meaning but sometimes uninformed “white” Christians today, said commission chair Gordon Nesdoly. “Many of us know in vague terms the injustices of the past, but the more brutal forms of subjugation are not well known.”

This interactive time, he told the group, “will give you a deeper understanding of relationships with indigenous peoples of Canada and how it shapes them today. It is a walk in someone else’s shoes.”

Reading from scrolls and giving index cards to persons to read, narrators Teresa Warkentin, youth pastor at Wildwood Mennonite Church, and Rita MacDonald, from Rosthern Mennonite Church, moved among the audience, giving directions to persons on the blankets that became crowded when the aboriginals’ land was taken away by changed treaties, or by actual killings, as was the case with the Beothuk of Newfoundland, and decimation by exposure to diseases brought by the Europeans.

On the prairies and along the west coast, said the narrators, genocide became common when small pox was contacted by the aboriginals through the deliberate distribution of blankets infested with the small pox virus.

Some of the historical events recounted came uncomfortably close to home. The land belonging to the band known as the Little Chipeewayan, as agreed in Treaty No. 6 (1876) was assigned for settlement by Mennonite farmers in 1897, 21 years after the signing of the treaty.

“For aboriginal people,” Bartel continued, “all of this was more than just a taking of lands. Because of their intimate connection to their traditional territories, for many it also meant a loss of ways of life, cultures, hope and some cases, a reason to live.”

Subsequent political manoeuvres, such as the British North American (BNA) Act, provided policy “teeth” for Prime Minister John A. Macdonald’s announcement that Canada’s goal was to “do away with the tribal system and assimilate the Indian people in all respects with the inhabitants of the Dominion.” Later, the Indian Act, pertaining only to First Nations and not the Métis or Inuit, was designed to transform independent aboriginal communities into physically marginalized and economically impoverished bands and individuals into “wards of the state.”

“Through this act,” delegates were told, “First Nations people were denied the basic rights that most Canadians take for granted.”

While some report having positive experiences, the residential schools era resulted in many aboriginals suffering from disease, hunger and overcrowding, as well as from emotional, physical and sexual abuse. Many lost family connections and the opportunity to learn their culture and traditions from their elders. Raised in institutions, many lost parenting skills. Some students—15-24 percent was reported--died in these schools. Many survivors never returned to their home communities or were shunned if they did.

Even as late as 2007, Canada voted against the United Nations’ Declaration on the Rights of Indigenous Peoples, even though it was adopted by a vote of 143 to 4 with 11 abstentions. Three years later, in November, 2010, giving credit to the urging of aboriginal leaders, and lessons learned from the experience of other countries, Canada announced its support for the Declaration.

Following the exercise, delegates were divided into small discussion groups to process what they had just experienced as a white majority trying to cope with just how complicit they were in this long, brutal history of systematic injustice.

“I felt overwhelmed,” said one group participant. “This is not the history we learned in school. What did I feel? I had to open my fist several times during the exercise – how dare this happen?”

“We need to listen to the stories (from First Nations and from "us"),” said another.  We will find common ground. Demonstrating our faith is holding someone's hand - sit and listen.  Many of us feel afraid to make changes, I think. We need to move out of our comfort zones in various ways. We need to be forging relationships and listen to how we can work together.  We need to follow through on their invitations to us to get to know them."

It proved to be a sobering experience for many. 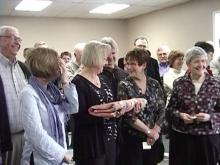 Hilda Epp, holds a blanket symbolizing the exposure to new diseases (small pox, tuberculosis, measles) that arrived with the European settlers on Turtle Island—an aboriginal term for North America—as Diane Tiessen looks on. On the far left is Denise Bartel and on the far right is Eve Klassen. (Photo by Dick Benner)

The timeline in the first two paragraphs doesn't really make sense. The pope's edict couldn't have been the source of discord because it was issued four years before John Cabot set foot on North America (i.e. Turtle Island). The only prior European settlers were the Norse and they abandoned their settlements for the express purpose that they did not get along with the indigenous population. So while reconciliation is a good thing, I don't think it's accurate to say we're returning to the halcyon days.

While I can see you reading it this way, Benjamin, take a second look. The pope's edict was already in place when the explorers discovered Turtle Island, giving them a ready handle to take possession of the land and de-legitimatize the natives on the grounds of them being non-Christian (pagans).