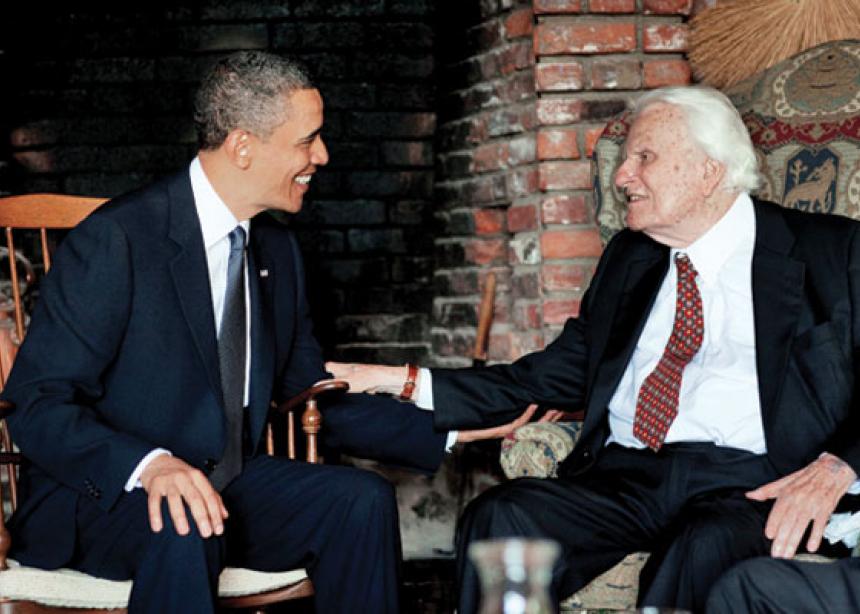 I recently received two books by authors in their 90s: Nearing Home by Billy Graham, and Time for Outrage by Stéphane Hessel, a retired French diplomat and concentration camp survivor who helped draft the United Nations Declaration of Human Rights. Each book conveys a strong sense of mission and each is made more compelling by the author’s age.

“It won’t be long before God calls me home,” Graham writes. While Hessel, a Jew with humanist inclinations, says “the end is in sight.” These books are their final public messages. Beyond that, similarities between the books thin out, but I find them complementary nonetheless. They mirror an important tension in the Mennonite church.

Graham’s book is personal, pastoral and simple. The evangelist—who has met with every U.S. president since World War II and has landed on Gallup’s list of “Ten Most Admired Men in the World” for 49 years in a row—makes no effort to be sophisticated or avoid clichés. He combines practical advice (“take full advantage of your company’s retirement plan”), pastoral guidance (“when the infirmities . . . of old age threaten to overwhelm you, turn your heart toward your Heavenly home”), repeated calls to conversion (the first one on page 4: “For those of you who do not know Him . . .”), and autobiographical notes (he confides that he cannot get out of a chair by himself, he has “never heard the voice of the Lord audibly,” and he misses his wife Ruth, who died in 2007, “far more than [he] ever could have imagined”).

Graham says the book is not just for elderly readers, but much of it is directed at them, with sections on retirement, preparing a will and relating to grandchildren (God loves them even if they don’t “dress the way you wish they would”). The book is a call to grow old “with grace” and to have an “impact” for the Lord right ‘til the end.

Like Graham, Stéphane Hessel burns with an undying commitment to rouse conviction in readers. Hessel’s mission arises not from the Gospel but from his “lifelong commitment to politics” and to the values of the French Resistance that set up a “modern democracy” after ousting the Nazis. The Resistance emphasized social security, freedom of the press and the common good.

Hessel wants to rekindle the fervour that first advanced these ideals. Revving up his political altar call, Hessel tells “younger generations”: “It’s time to take over! It’s time to get angry! . . . Let us not be defeated by the tyranny of the world financial markets. . . . join the great course of history as it flows toward greater justice.”

Originally published in French, the 30-page mini-book has sold more than four million copies in over 30 languages. It’s emphasis on income inequality and the “dictatorship of executives” overlaps with the ethos of the Occupy Wall Street movement.

While Hessel calls outrage “one of the fundamental qualities of being human,” he says rebellion must be peaceful. “The future belongs to nonviolence and the reconciliation of clashing cultures.”

“The worst attitude is indifference,” he implores.

Neither he nor Graham could be accused of indifference. Both care deeply about humanity, though in different ways—one about people’s earthly well-being, the other about people’s spiritual and eternal well-being. Hessel doesn’t talk about matters of the soul; Graham doesn’t talk about poverty, war or climate change. Only one would ever say, “It is high time that integrity, justice and sustainable development be allowed to prevail.” And only one would encourage readers to “make a forgiving spirit part of [their] legacy.”

Elements of these two worldviews exist within the Mennonite church. Some people focus on social justice, while others—influenced perhaps by Graham and other largely American evangelical figures that have filled airwaves for decades—focus more on individual faith. This creates tension.

If people on both ends seek to understand and learn from people on the other end, the church becomes stronger. But that’s tough. I’m tempted to offer critique of both Graham and Hessel, but instead I will suggest that their respective emphases are complementary. The point is not to choose sides but to choose to humbly learn from the other side—to reconcile the many parts of the one body. Significantly, the need for a posture of reconciliation is something Graham and Hessel agree on.