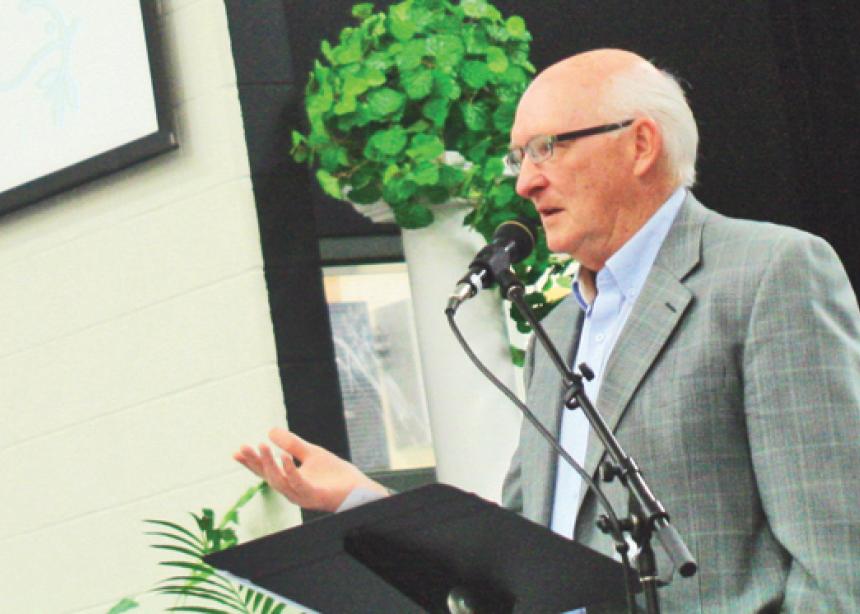 First up was Krista Loewen, a peace and conflict transformation studies student at CMU. She was intrigued by Suderman’s reference to the Roman Empire’s “colonization of imaginations” through Pax Romana (“peace obtained by the sword”). Suderman had noted that Christians need to colonize imaginations, too, but with gratitude reflective of biblical peace.

“How can we have a deeper sense of gratitude?” Loewen wondered.

“The deepest expression of gratitude is to dedicate your life, your passion, your gratitude and your gifts to building communities like this,” Suderman responded. He then challenged Loewen to take that message back with her to CMU.

Next at the microphone was Jim Loepp Thiessen, pastor of The Gathering Church in Kitchener, Ont. He described his congregation as “all over the theological grid in their perspectives on peace.” He then referred to Suderman’s comments about the World Religions Summit in Winnipeg in June, where keynote speaker Romeo Dallaire asserted that, because the United Nations chose not to intervene militarily in Rwanda in 1994, genocide took place.

But what if the horses are already out of the barn? pressed Loepp Thiessen.

Suderman suggested that the church can still influence outcomes in regions of conflict through peaceful actions, such as advocating and exercising influence in political houses of leadership.

“I think you’ve hit the nail on the head,” Marco Funk, pastor of Gretna Bergthaler Mennonite Church, Man., said in regard to Suderman’s Bible study. “I like the language of letting the Word of Christ ‘dwell.’ I like the language of imperatives and non-negotiables. . . . I love that language, . . . but our context in southern Manitoba is one of landedness. We’re affluent; we love our stuff. We struggle with holistic allegiance. We really want to follow God.”

Suderman replied, “Recently a pastor told us that he gets up in the morning energized and refreshed by the vision for the church in Ephesians and Colossians, and he’s ready to go for the day. He goes to bed realizing that he spent the day in Corinth working with people where [the church] isn’t yet working.” His advice: “Get up in the morning with Ephesus; go to bed at night with Corinth, and be grateful.”

With files from Donita Wiebe-Neufeld, Alberta correspondent for Canadian Mennonite.