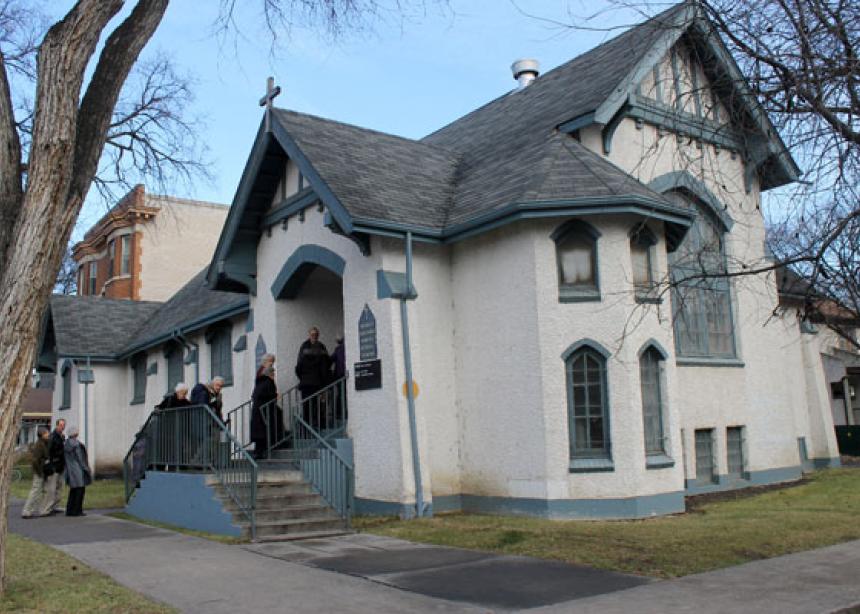 One stop on a guided bus tour was the Furby Street building where members worshipped from 1945-1955. This 105-year-old building is now used by the St. Demetrius Romanian Orthodox Church. It is also the birthplace of Canadian Mennonite Bible College (now CMU).

In 1937, a tired and aging Rev. Benjamin Ewert sat in the old Eaton’s waiting room in downtown Winnipeg. As young people drifted through, he studied their faces to see if he could match any of them to the rural Mennonite people he knew in southern Manitoba.

This was not the first time Ewert had been asked by the Conference of Mennonites in Canada to canvas the city and form a church for Canadian-born Mennonites in Winnipeg. Previously he had not been successful but now at age 67 he was committed to trying again. The Eaton’s waiting room, he knew, was a popular meeting place for rural Mennonites. Over time he found twenty-one young people by patiently scanning the faces of those who came to the Eaton’s waiting room and invited them to come to a meeting at his home on December 8. Every one of them came.

This beginning, growing out of his fatherly concern for the faith of Mennonite young people coming to the city, was the start of Bethel Mennonite Church. On Nov. 3 and 4, 2012, Bethel celebrated 75 years which have seen the church grow to a place that has not only nurtured faith but has been a catalyst for programs and outreach into the city and beyond.

By Jan. 16, 1938 the small group of young people with rural Manitoba roots was gathering regularly for worship. At first they called themselves Winnipeg Mission Church. A year later they moved to rented space in central Winnipeg and changed their name to Bethel Mission. In 1945 they were ready to purchase their own church building and bought a former United Church building at Furby and Westminster, changing their name again to Bethel Mission Mennonite Church.

While at the Furby Street location, Bethel became the launching pad for Canadian Mennonite Bible College, now Canadian Mennonite University. Classes were held in the small basement. The growing student body needed more space after two years and CMBC moved to a much larger building on Wellington Crescent.

By 1955 Bethel had outgrown the Furby church building. They bought the property at their present location and erected a new church building. By 1957 the church had become independent from the Mission Board and changed their name for a final time to Bethel Mennonite Church.

With video presentation, story-telling, and guided bus tours to previous church locations and daughter churches, Bethel celebrated its rich history in which membership, programs and ministries have grown beyond anything Ewert likely could have imagined. A mural-sized quilt, the erection of a peace pole, the unveiling of a peace parchment listing Bethel’s forty-seven WWII conscientious objectors, a coffeehouse featuring an abundance of local artistic talent, and choir performances gave testimony to Bethel’s commitment to honouring and serving God through its peace witness, through the arts and through mission outreach, locally and overseas.

Bethel has been the launching pad of many significant initiatives besides CMBC. In 1961 when Bethel’s membership reached 515, the congregation started its first daughter church, Elmwood Mennonite which later became Burrows Mennonite. In 1997 this church dissolved due to declining membership. In 1963 the second daughter church was born, Charleswood Mennonite and in 1987, Hope Mennonite Church was launched.

Carter Day Care was founded in 1974 by several Bethel members and continues today on the church premises, serving the neighbourhood and Bethel’s membership. Vacation Bible School was another form of outreach into the community for many years. Some years the attendance was over 350 but by 1987 the program was dropped for lack of finding a volunteer director. In 1985 Bethel sponsored a Mennonite Voluntary Service unit in Winnipeg. Under Bethel’s sponsorship this unit continues to place volunteers in ministries throughout the city. Since 1979 Bethel has sponsored more than 100 refugee families.

In 1978 a small group of Chinese Christians needed a place to worship. Bethel offered them space and a year later after diligent study the group decided to join MC Canada and became the Chinese Mennonite Church. In 1983 they purchased their own building.

Gerald Ens at the Sunday morning worship service suggested that as Bethel celebrates 75 years, conversations should focus not only on comfort and edification. “Part of worshipping a crucified God means that we should become continually unsettled especially when things become easy. I pray that by carrying on we will have fellowship and conversations that will be at once unsettling and edifying.”

One stop on a guided bus tour was the Furby Street building where members worshipped from 1945-1955. This 105-year-old building is now used by the St. Demetrius Romanian Orthodox Church. It is also the birthplace of Canadian Mennonite Bible College (now CMU).

On the occasion of their 75th anniversary, Bethel members erected a Peace Pole to symbolize its commitment to peace.