‘To be in harmony with all people’

June 23, 2010 | God at work in the Church | Number 13
By Karin Fehderau | Saskatchewan Correspondent 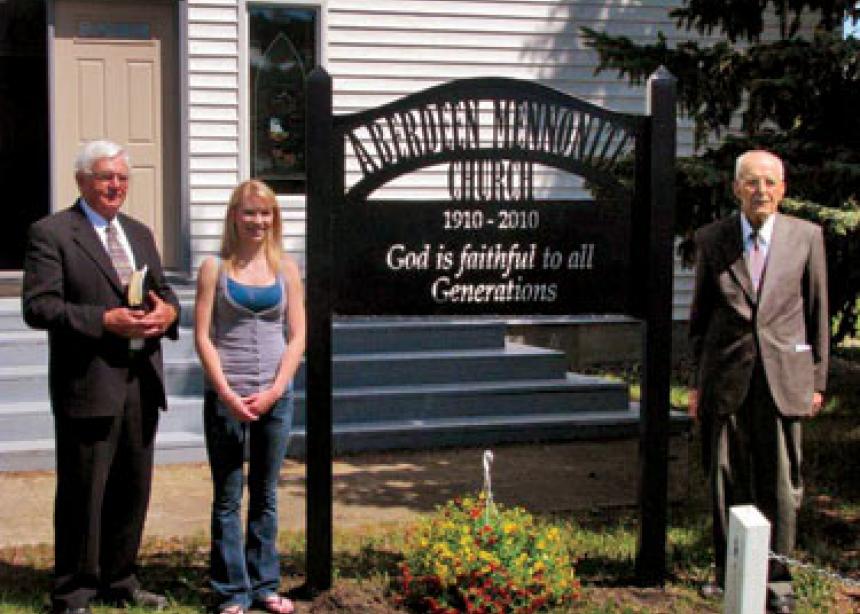 In the town of Aberdeen, Sask., population 600, a small but committed group of Mennonites that call this place home gathered together in early June to celebrate 100 years of witness to the community.

Numbering about 45 on a Sunday morning, Aberdeen Mennonite Church—now led by Vern Ratzlaff—began anniversary celebrations on June 5 with local tours to cemeteries and former church building sites. The day ended with a volunteer choir rehearsal and tea. Celebrations continued with a morning service and noon meal the next day.

Neither has it always been easy for the group. “When we arrived to pastor, they had just gone through drought, [the mad cow disease disaster], . . . but they were still faithful to come to church,” said Funk.

David Neufeld served in a half-time capacity in the congregation from 1999 until 2004. “The church is a collection of people of a wide variety of backgrounds, religious and ethnic,” he said, describing the Aberdeen congregation. “And they have achieved a sense of oneness, focusing on that which they have in common.” One of the special memories he has of the congregation is the celebration of his own retirement from ministry while he served there.

The original mix of Mennonites that first settled in the area included businesspeople and farmers, said church historian Leonard Doell, who explained that there were businesses set up by Mennonites in the town of Aberdeen by the early 1900s. “At one point, a possible name being considered for the town was Dueck, after P.W. Dueck, who was a local businessman,” he noted.

Although the church was organized as early as 1907, it did not have a building until three years later. The dedication service was held June 12, 1910, and became, for a while, a part of the Rosenort Mennonite group of Saskatchewan churches. The original building is still in use, and has been added to and redesigned down through the years.

Using unpaid or elected leaders for the first 65 years, most ministers were farmers, said Doell, but several local teachers also took on the role during that time. A total of 12 pastors were elected to serve.

In 1974, Ferdinand Ediger became the first paid leader of the congregation. In the last 10 or more years, the group has relied on part-time and semi-retired individuals to fill the roles of pastor and leader.

As a way of preparing for the centennial, the Aberdeen church historian was invited to give short historical updates in the weeks leading up to the anniversary weekend. During one of his reflections, he spoke of the first group’s pure intentions.

“When the Mennonites came, they wanted to be in harmony with all people,” said Doell. A century later, the desire of the original settlers can be seen to be played out in the church’s present-day realities.

In an article written for the Mennonite Historical Society of Saskatchewan Historian, Kathy Klassen, a member of Aberdeen Mennonite, wrote: “Over the years, the Mennonite Brethren, Bergthal and United Churches closed and were moved away, leaving Aberdeen Mennonite the only church at Aberdeen. A few members of each of those churches are worshipping with us at the present time.” 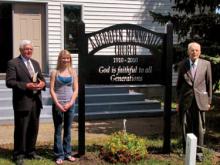