Artists collaborate with each other and with nature 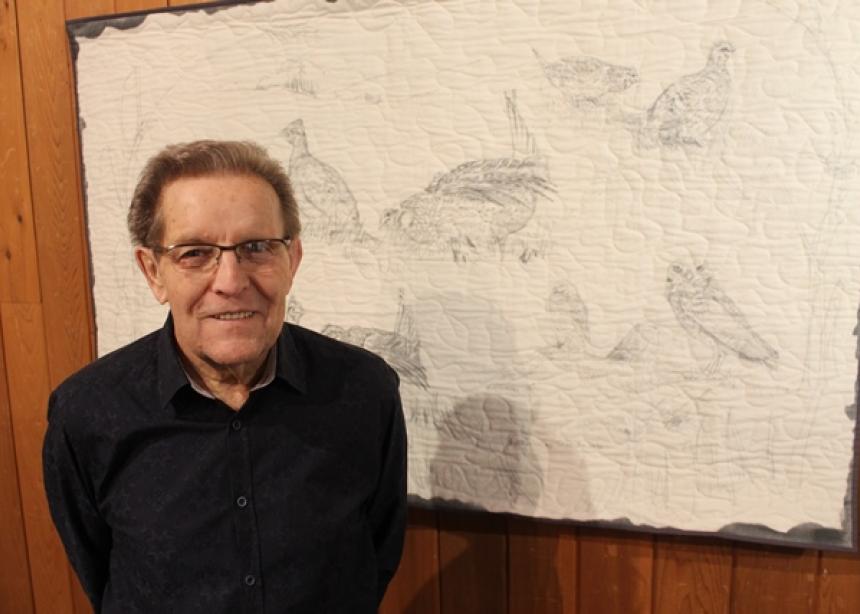 A collaboration between two long-time friends and the woodwork of a man with a long history with Mennonite Church Canada are the basis for two exhibitions now showing at the Mennonite Heritage Centre Gallery (MHCG).

Collaboration features quilts made by Marj Moore, alongside paintings created by Gus Froese. The works depict landscapes, sky, clouds, trees, grass, water and animals, and use colours like red, yellow, green and brown, to explore the theme of fall.

The exhibits opened together on Friday, Jan. 24 and are on display until Saturday, March 15.

Ray Dirks, curator at the MHCG, said he wanted to showcase the works of the three artists in part because of the connections they have to Winnipeg. Neufeld lives in the city, and Moore and Froese have relatives here.

“Gus and Marj are well-known artists who produce quality work,” Dirks said at the opening, which drew a crowd of about 50. “And when they said they wouldn’t have enough work to fill the entire gallery, I thought it would be a good opportunity to show Henry’s work as well. Lots of people have known about his woodwork. I thought it would be nice to [recognize] him as an artist and celebrate his long career with the church.”

Collaboration was originally exhibited in 2012 at the Mosaic Gallery in Moose Jaw, Sask., an hour-and-a-half south of Hanley, Sask., where Moore and Froese originally crossed paths. Both grew up in Hanley, but at different times. Froese taught in Hanley from 1961 to 1965, and Moore was in his Grade 7 science class. Many years later, they reconnected when Moore came to teach at Peacock Technical High School in Moose Jaw, where she taught Froese’s son in Grade 7.

Both are now retired and pursuing their artistic interests. Froese said Collaboration came about because the two friends thought it would be fun to work together. They chose the theme of autumn because they thought their work would be complementary.

“It’s quite conducive to either one of our disciplines,” Froese said.

Both artists were challenged by the collaboration. Moore learned to create lines, textures and shadow with her needle, and Froese learned to emulate quilting with paint. They worked on each other’s pieces, did interpretations of each other’s work, and both created portrayals of the same photograph.

“[Marj is] so alert and full of ideas, and I think we matched each other in that respect,” Froese said at the opening, which Moore could not attend because she was on vacation. “We get along really well.”

Meanwhile, Neufeld’s exhibit features work he started creating while teaching in various Aboriginal communities throughout central-eastern and northern Manitoba, including The Pas, Little Grand Rapids and Pauingassi. Neufeld uses pieces of wood that he finds to create his work. He does not carve or shape them, but rather, retains the natural, gnarled shape of the wood and simply cleans it up using sandpaper and olive oil or shoe polish. During a short speech he gave at the opening, Neufeld referred to the pieces of wood he finds as “hitchhikers.”

“I love walking on the beach or in the bush, and I meet all sorts of hitchhikers begging me to take them along,” he said.

Neufeld began creating his art when he saw others woodworking with diamond willow wood.

“I was very intrigued by it, and bit by bit I guess, it advanced into using other kinds of wood as well,” he said.

Dirks added it was wonderful to see Neufeld’s enthusiasm when the two began discussing the possibility of an exhibition. “He finds [pieces of wood] that say something to him. That’s kind of neat,” Dirks said. “It’s part of his whole faith journey.” 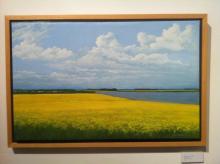 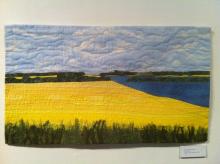