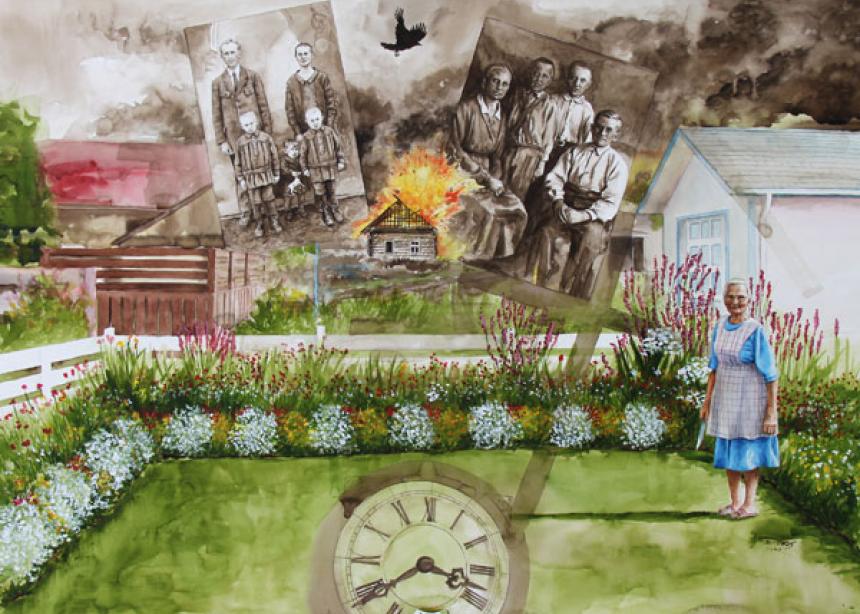 He is doing this work at the request of refugee children and grandchildren who wanted to honour the mothers who brought them to safety—and eventually to Canada—nearly 70 years ago. It has been approximately 75 years since the fathers of most of them were taken during the Stalin purges of the late 1930s. The committee consists of Henry Bergen, Nettie Dueck, John Funk and Wanda Andres, all of Winnipeg.

Dirks will be painting canvasses commissioned by family groups, MCC, and Friends of the Ukraine, in each case incorporating a number of scenes into a canvass. Dirks, who has given much of his attention in recent years to the art of people of African and Asian backgrounds, has long wanted to reflect stories out of his own stream of Mennonite history. He fears they are being lost.

One of his paintings will depict a great-aunt who arrived alone in Canada after World War 2. She bore five children; three died young and two were taken from her when she was fleeing Russia. She never saw them again. Her husband was arrested during the Stalin purges and never returned. Dirks remembers her as a “gracious, lovely, faithful woman” and that’s how he has tried to paint her. However, hers will be the one painting that has the image of Joseph Stalin on it. Dirks says, “many people who’ve sponsored a painting have said they don’t want them to be horrible; they want them to be positive,” so they don’t want Stalin on it.

The faith that God was watching out for them gave many of the women the ability to deal with the fears and losses they experienced. There is a notable sense of “grace and forgiveness and absence of revenge” in the people who lost so much during their years in the Soviet Union, says Dirks. One of the paintings will be sponsored by Friends of the Ukraine, a group organized specifically to assist in Ukraine’s reconstruction after the collapse of the Soviet Union.

The name of this art project is “Along the Road to Freedom.” It recalls the trek many families made in escaping the Soviet Union. Mennonites from various scattered colonies in Ukraine joined the retreating German army in the fall of 1943. Among them was Henry Bergen’s family and almost everyone in his village of Gnadenthal, in the colony of Baratov. Provisions and some precious items were loaded on perhaps 60 or 70 carts.

Bergen remembers that after travelling with his mother, two brothers and a sister through mud and snow for a month and a half, they were put on a train and taken further west. He recalls reaching a town on the Oder River not far east of Berlin. His mother was sitting quietly on a pallet of straw in the school where they were being housed as the Russians were shelling the town. Suddenly she told her children, “Now, let’s go.” The gathered her children and led them to a train station where a hospital train was ready to leave. “We were allowed,” says Bergen. “As I understood, we were the last train before the bridge was destroyed.”

The family reached Potsdam, but then went through the terrible bombing of the city in April 1945. From there they lost each other for a time. His sister remained there when the others fled from the city. Bergen and one of his brothers were separated from his mother and other brother. Through the sister the boys and mother were eventually reunited in 1946.

By late 1947, with the help of relatives, the family came to Canada. They were always grateful that they didn’t suffer the fate of many who fled Russia, but later forced to return. Of the 35,000 Mennonite refugees who reached Poland or Germany, approximately two-thirds were taken back, large numbers of them directly into northern Russia or Siberia, where many of them perished.

In recent years Bergen learned that his father was executed soon after his arrest in 1937. Women like his mother faced very difficult decisions, he says. “She carried the weight of keeping the kids together. She said, ‘What will Dad say if I lost my kids?’ Normally couples supported each other, now the weight was all on the mothers’ shoulders. That story needs to be remembered.”

Each of the 20 paintings in the “Along the Road to Freedom” project will tell its own story. When the exhibition ends in Jan. 2013, the paintings will be available to travel. Churches will also be able to display the paintings at events that tell the stories of the refugee experience. One exhibition is already scheduled for Steinbach, Manitoba. Eventually the paintings will find permanent homes in Winnipeg.

Harold Jantz is former editor of the Mennonite Brethren Herald and a member of River East MB Church, Winnipeg. 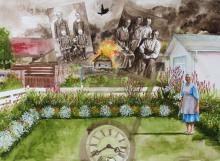