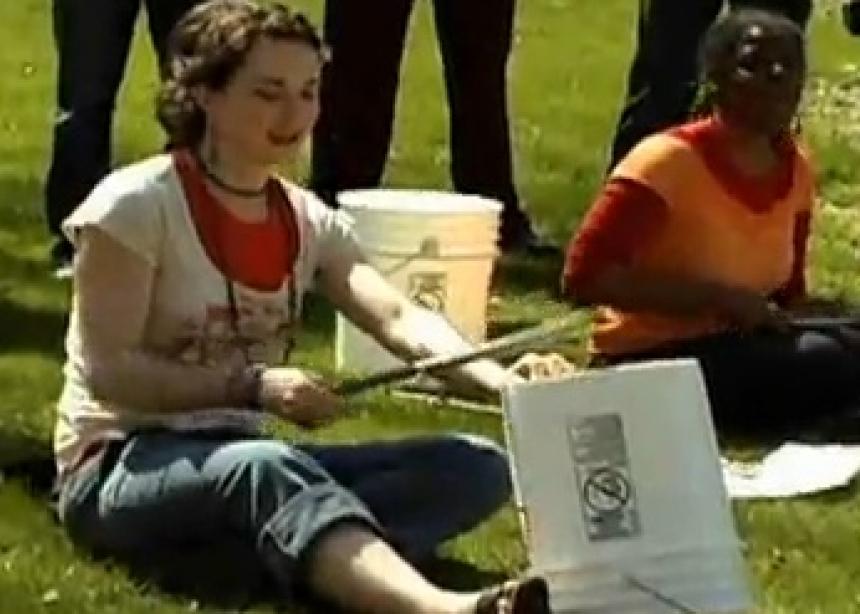 Praise, support, indifference, disbelief, outrage — and lots of media attention. Responses to a Goshen  College decision not to play the national anthem covered a wide range of perspectives.

On June 4, the college’s board of directors reversed a Jan. 22, 2010, decision to play “The Star-Spangled Banner” before some sporting events, restoring a 50-year tradition of going without the anthem.

The board asked President James E. Brenneman to find an alternative to playing the anthem.

News media, the general public and people connected to the college have been responding ever since the decision was announced June 6.

“We have received several hundred phone calls and hundreds of emails from students, faculty, staff, alumni, Mennonite Church USA members, local residents and people from all over the United States,” said Richard Aguirre, director of public relations, on June 10.

Among the college’s core constituents, he said, responses have been mixed.

“It appears the majority of phone calls and emails outside Indiana have expressed opposition to the board’s decision,” Aguirre said. “We have engaged with many of the people who have called or sent emails and have appreciated the feedback and the opportunity to explain the decision.”

Google News shows more than 100 articles published on the college since June 6. Readers have left comments — sometimes thousands of them — on some of these stories.

Dozens of people have posted on the Goshen College Facebook page. Dozens more have commented on those posts.

Alumna Emily Stuckey Weber wrote: “Thank you GC, for staying strong in your decision and allowing discussion to occur here in this forum.”

Andy Alexis-Baker, who in April 2010 helped deliver a petition opposing the original decision, praised Goshen’s decision in a blog at jesusradicals.com.

The Truthof Elkhart, Ind., and The News-Sentinel of Fort Wayne, Ind., both published editorials on the decision.

“What’s un-American is the idea that all Americans must be forced to adhere to some sort of patriotic orthodoxy,” the June 8 editorial said.

The News-Sentinel editorial on June 9 affirmed the college’s decision-making process as “very open and inclusive in a refreshing way that other institutions could learn a lot from.”

The editorial also affirmed the college’s interest in living out its core values. “Institutions that go too far in trying to please those who don’t accept their doctrines stop being what they are,” the editorial said.

The Goshen Newsprinted three stories about the decision, including one highlighting responses from local war veterans.

“I don’t get it. The military is the backbone of this country,” said Randy Troyer of Goshen, who served in the U.S. Navy and is second junior vice commander at the Goshen Disabled American Veterans Chapter 15.

A Foxnews.com story published June 7 stayed among the site’s top five “most commented” U.S. stories for at least six days.

The story, which drew more than 3,300 comments, quoted Harland Lantz, a Goshen city councilman. He called the decision “anti-American.”

“Instead of living here in Goshen, they should go down and live in Cuba or Iran,” he said. “Then have them come back and see if their attitude has changed.”

Brian Kilmeade of Fox News discussed Goshen’s decision on the air more than once.

On Fox and Friends, the morning show’s co-hosts asked Nick Jonas of the Jonas Brothers music group about the decision.

“It’s not my place to judge what the college thinks of the national anthem or what the students think,” Jonas said.

Some news articles, including ones from Fox News and NPR, said the college “banned” the national anthem. But the anthem has never been banned from campus. Goshen began intercollegiate sports in 1957 but had never used the anthem until it was played before a baseball game on March 23, 2010.

Via Facebook, “Here & Now” has asked what song Goshen College should play in place of the national anthem.