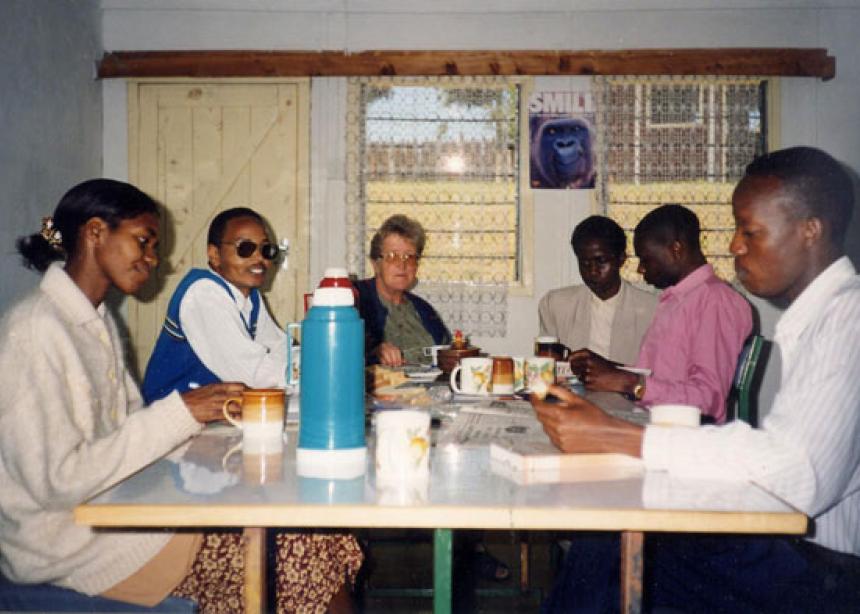 What factors have given these runners the leading edge over virtually everyone else? In this regard, theories abound and sometimes compete. Of all the ingredients in the theoretical mix, altitude is definitely an important one. Iten, a small village perched precariously at 8,000 feet above sea level atop the west wall of Africa’s famous Rift Valley, functions as a multi-branched training hub for at least 1,000 runners and would-be champions.

In his book, Running With Kenyans, Adharanand Finn, a British journalist who has lived, reported from and run in Iten, identified ugali, a Kalenjin staple consisting of boiled corn/maize mush, as another ingredient. Additionally, he cites the rigors of the Kalenjin people’s rural lifestyle as an endogenous stimulant to runners. From the earliest age, children run after and herd cattle, they run from their homes to school and back, easy totaling up to four or five miles a day. Finn also cites two other core elements that he considers to be critical to running success. Firstly, Iten’s runners commit themselves to full-time training and, secondly, they follow a singularly rigorous regime of running, resting, eating, sleeping, and more running.

Today Kenyan runners—champions and would-be champions—follow in the footsteps of a pace established by intrepid pioneers. Already in the early 1960s, Kalenjin runners were winning Olympic gold medals. Among them was Kipchoge (‘born-near-the grain-storage-shed’) Keino whose running prowess at world and regional levels was simply astonishing, as a quick check with Wikipedia’s list of prizes and recognition will attest. Later, in his mature years, he established and continues to manage a training school for would-be champion runners. He has developed the Kip Keino Foundation and is widely engaged today as a benevolent public persona within Kenya and far beyond.

Some years ago, I chanced onto the launch of a book authored by one of Kenya’s much-decorated army generals, who hails from Kenya’s Kalenjin community. The launch took place in one of Nairobi’s glitzy new malls and during the informal chatter following the formal speeches, Kip Keino was standing nearby, nursing a soft drink. Conversation ensued, quickly zeroing in on Kenya’s champion runners and then, unexpectedly, to a common acquaintance—Ank de Vlas.

“To that lady I owe much for the running career that I have enjoyed,” said Keino. It turns out that she played a role in Keino’s spectacular running career and in the careers of other select Kenyan runners.

Ank de Vlas was a Dutch national, born August 20, 1937 in Leeuwarden, The Netherlands. She was educated at Ryks Kweek School in Leeuwarden. In 1963 she joined Mennonite Central Committee’s (MCC) Teachers Abroad Program (TAP). During the 1960s and ‘70s, TAP flourished in East Africa, especially in Kenya where de Vlas was seconded as a teacher to Kapsabet Girls High School, an institution sponsored by the Africa Inland Church. She taught in this secondary school for an initial three-year term. At the conclusion of that term she expressed a wish to continue for another three-year term. But before doing so, she appealed for opportunity to expand her formal training in the discipline of education.

With the support of Donald Jacobs, TAP administrator in Kenya, and through the facilitation of Robert Kreider, President of Bluffton College, she was accepted by that Mennonite-supported college in Bluffton, Ohio, to complete her bachelor’s degree in education. She then returned to Kenya where she fulfilled her commitment to a second term with MCC’s Teachers Abroad Program.

During her two terms of service with MCC in the 1960s, our paths crossed several times, particularly during the annual MCC retreats convened at the Brackenhurst International Baptist Centre, nestled in the spectacular highlands near Limuru. And then she faded into circles beyond the MCC community until one day in June 2001 her obituary was spotted in the Daily Nation, a Nairobi newspaper.

We were stunned by the death announcement, but equally by the realization that we had been completely oblivious to her presence in East Africa during the intervening decades. In a subsequent conversation with a long-standing Kenyan friend, Professor Kabiru Kinyanjui, we recounted what seemed to us an unusual sequence. Kinyanjui only added to the mystery of the story by responding: “I was at the funeral of Ank de Vlas. She is buried on my sister-in-law’s farm!”

Later we found ourselves among British friends in the garden of Peter Paterson’s lovely home in Karen, a Nairobi suburb, while celebrating the 60th anniversary of Queen Elizabeth’s reign. In conversation with Ray Meynink, a long time acquaintance, we were surprised to learn that he served as an authorized agent to test—on a prescribed routine basis—the Kenyan Olympic-class runners for any illicit drug use. In that capacity he had learned about the contribution of Ank de Vlas to Kenya’s running genius.

He informed us, further, that for years Ank had collaborated for these purposes with a Catholic Brother by the name of Colm O’Connell of St. Patrick’s High School in Iten. With that tip-off, there followed communication with Brother Colm. During the 2012 Olympic Games in London, O’Connell was cited repeatedly, both in the international and in the Kenya media, as the self-effacing, behind-the-scenes unofficial coach to numbers of Kenya’s top runners, including David Rudisha, the irrepressible Olympic 800 meters world champion (2012).

In a gracious letter, O’Connell traced his first contact with Ank de Vlas to the year 1977, and wrote, “I cannot praise Ank too highly for her work as an administrator teacher, as an outstanding sports trainer and organizer. As a young coach I was honored to have worked alongside Ank. She was one of my mentors and an inspiration to me, a very dedicated and knowledgeable person. Her contribution to sports, especially [track] athletics was second to none. Together we organized the local secondary schools cross-country athletics for several years.”

Among her athletic protégés, cited by O’Connell, were runners like Nancy Jebet Lagat, Olympic 1500 meters Champion in Beijing (2008), Rose Kosgei, World Junior Cross-country Champion (1997), Hellen Mutai who took third position in the New York Marathon (2007), Prisca Jepleting who represented Kenya at the World Athletic Championships (2011) and Salina Kosgei who won the Boston Marathon (2009)—all products of Kapkenda High School where Ank had served as headmistress.

O’Connell concluded: “Ank’s contribution to Kenyan education and sports should not be either under-estimated or go un-noticed. To me she played a huge role in promoting both and I am sure that she has many products of her schools who hold high positions in various organizations in the country. She has left behind a huge legacy and I am sure many of her former students fondly remember her.”

Details of Ank’s final assignment at Hekima (wisdom) Girls High School became accessible through our friend Professor Kinyanjui. He shared the name and telephone number of his sister-in-law, Mrs. Irene Kimenyi. I met her on the premises of a delightful enclave behind a prominent entrance board proclaiming, Kitengela Park. With the support of her husband, Professor Mwangi Kimenyi, a long-standing research fellow at Brookings Institution in Washington D. C., she was in the process of establishing and managing this family-oriented recreational facility, located some miles south of Nairobi. Over a soft drink, and later a meal of rice, chicken and greens, she recounted how Ank de Vlas had come into her life.

In the late 1990s, Professor and Mrs. Kimenyi had decided to establish a quality girls high school on a portion of their farm located next to the village of Ndaka-ini, some miles west of Kenya’s industrial town of Thika in central Kenya. Ank de Vlas was one of the respondents to an advertisement seeking a headmistress for Hekima Girls High School. She ranked easily as the most qualified of the applicants and was accepted for the position.

Why did Ank seek such a position at that time in her illustrious career? According to Mrs. Kimenyi, she was eager for an opportunity to build up a girls secondary school, from scratch. Ank undertook her assigned task with aplomb. During her three-year tenure at Hekima, the student body grew from virtually zero at the beginning to nearly two hundred. Ank oversaw every aspect of the school’s operations with an astonishing fastidiousness. She kept a record of the number of nails used in the woodworking shop; she maintained the school’s financial accounts; she sewed up the quilts used by the girls in the dormitory; she undertook the weekly shopping in near-by towns for the school’s kitchen. And she engendered a most remarkable esprit de corps among the students as well as high levels of academic achievement.

One day in June 2001, Ank de Vlas did not leave her room early in the morning as was her usual practice. Concerned staff forced the door into her room and found Ank sprawled on the floor, moaning and unconscious. She was rushed to the Nairobi Hospital and soon diagnosed with a brain tumor. After what seemed like a successful operation and even the beginnings of a promising recovery, she experienced a sudden relapse and died on June 27, 2001.

Thousands of people attended the funeral/burial service—students, teachers and headmistress from schools where Ank had worked in years past. Moses Tunui, a champion runner, represented and spoke words of recognition and thanks on behalf of a corps of fellow champion runners. The former, now-retired, President of Kenya, Daniel Toritich Arap Moi, sent his condolences. Many parents of students and representatives from the immediate community were in attendance.

Ank de Vlas’ send-off was in every way extraordinary. She is buried on the Hekima Girls High School compound, an arrangement proposed by the school board and assented to by Ank’s relatives in the Netherlands. Ank de Vlas is remembered as one who gave a lifetime of dedicated service in support of Kenyan students and Kenyan runners. She is remembered and mourned by Irene Kimenyi as a treasured personal friend.

Harold Miller has spent most of his career working with Mennonite Central Committee in Africa, including Kenya, Tanzania, Uganda and Sudan.

1. Who were the special teachers in your life? What were the qualities that made them special? Did they help you see and understand more about yourself, or more about the world around you? Do the best teachers work on a one-to-one mentoring role?

2. How do we learn perseverance? Are dedication and endurance something we can be taught later in life, or something we learn very early? How can we encourage each other to cultivate these values? Are there situations where perseverance is a negative quality?

3. How important is education to the well-being of the church? What does the decline of Bible schools and the rise of church-connected universities say about the health of our churches?

4. What is the role of church schools at the elementary, secondary and post-secondary level? Can we have healthy churches without them? How big a role does affordability play in whether or not families send their children to church schools? 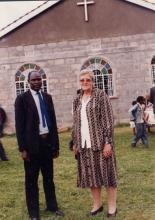