The Amish Project provocative and harrowing 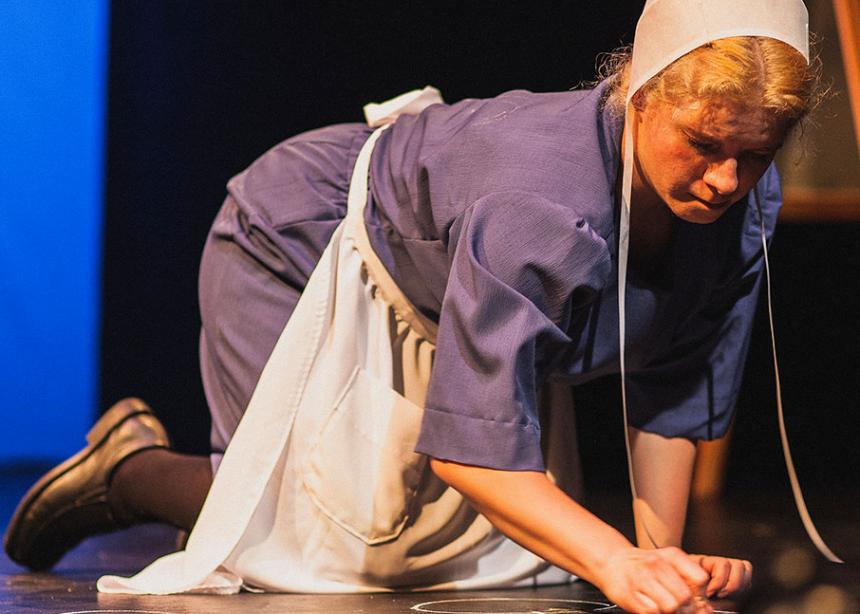 Amy Keating, playing Velda, an Old Order Amish girl, tells the story of the Amish Mines shooting in 2006 through naïve chalk drawings on the floor of the stage in The Amish Project. (Photo by Joel Mieske/courtesy of Green Light Arts)

In 2006, when the Amish of Nickel Mines, Pa., forgave the man who shot their daughters and offered assistance to his widowed family, the world was divided: Were they insane, misguided or holy beyond human reckoning?

Jessica Dickey, an award-winning actress and playwright from Pennsylvania, wrote a one-woman play about the tragedy, trying to get inside the heads and hearts of the main characters. Although the characters are all fictitious, her play moves theatre-goers to consider each of the real people they’re based on, including the shooter, as broken beings in need of forgiveness. The specific becomes the general as the viewers of the unfolding catastrophe consider their own needs to forgive and be forgiven.

The Canadian premiere of the play was produced at the University of Waterloo in early October by Green Light Arts, with director Matt White and actor Amy Keating.

Dressed as a traditional Old Order Amish girl, Keating transforms herself from that girl into the shooter, his wife, a church historian, a local supermarket clerk of Latino/African American heritage, and a local woman who tells the shooter’s wife in the supermarket that “there’s a special hell reserved for you and your sicko husband.”

The characters tell their stories from their particular point of view. Velda, the central character, is a pre-teen girl, naïve, engaging and chatty, telling the audience that she wants to be like Dirk Willems in Martyrs Mirror, dying for her faith when the time comes. On the stage floor she uses chalk to draw a crucifixion, the shooter, and the 10 children who were tied up and shot, with each successive drawing pulling the viewers into the horror they know is coming, but she doesn’t.

The shooter’s wife, confronted and broken, returns home to find members of the Amish community at her house bringing food, and offering money and forgiveness. When, in anguish, she tells them to leave, Velda’s father looks at her, “the word [forgiveness] between his blue eyes, boring the word into my forehead.” When she has a post-death experience of her husband looking at her through a window, much as he had in their courtship years earlier, she does the same for him, until he fades away, never to return.

The director, who describes himself as “a humanist from a religious family,” says he was looking for a play that was both inexpensive to stage and that connected people with real issues when he came across The Amish Project. The play ends with Velda, in an out-of-body, post-death appearance, calling on the audience to “see [God], keep on looking.”

Some have found this heavy-handed theologizing, but White feels it to be open ended, inviting all to find their truth that will help them to connect with others in the human community. In a society in which profit and money have replaced belief systems, and in which greed affects those around each human being, he feels people are out of touch with the bigger picture of being humans in relationship.

White hopes to restage The Amish Project in a year and then take it on the road to Manitoba, Alberta and potentially to B.C.s Lower Mainland. 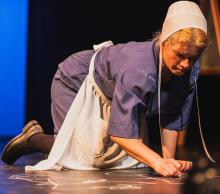 Amy Keating, playing Velda, an Old Order Amish girl, tells the story of the Amish Mines shooting in 2006 through naïve chalk drawings on the floor of the stage in The Amish Project. (Photo by Joel Mieske/courtesy of Green Light Arts) 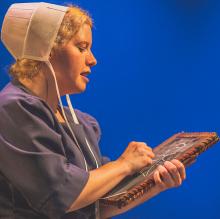 Amy Keating, playing Velda, an Old Order Amish girl, draws on her slate in the school house in The Amish Project. (Photo by Joel Mieske/courtesy of Green Light Arts)