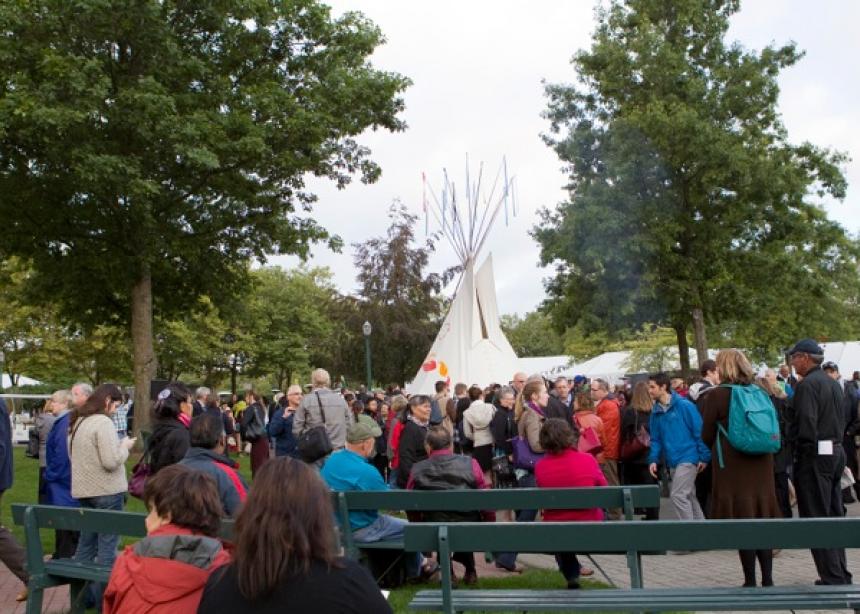 In the fall of 2013 a Mennonite delegation of six Americans and Canadians went to Vancouver, B.C., for a Truth and Reconciliation event.

They joined representatives of Indigenous and settler communities to learn about the similarities between Indian Boarding Schools (IBS) in the USA and Indian Residential Schools (IRS) in Canada, to honour survivors and acknowledge participation of the former General Conference Mennonite Church (GCMC) in this traumatic history.

In the USA, varied sources estimate more than 100,000 children were subjected to IBS, the U.S. counterpart to IRS in Canada.

“Often, people just aren’t aware of the Mennonite involvement in this history,” said Steve Heinrichs, director of Indigenous Relations for Mennonite Church Canada, who led the delegation. “To be present for healing and to help provide awareness, all within a safe space, was a tremendous sign of the Spirit’s movement throughout the week.”

The IBS and IRS were the institutional means through which U.S. and Canadian governments attempted to erase Indigenous culture from their national landscape, said Colleen McFarland, director of archives and records management for MC USA.

“We [Mennonite Church USA and Mennonite Church Canada] have separate histories but a shared responsibility,” said Iris de León-Hartshorn, director of transformative peacemaking for MC USA. “In Canada, the residential schools were mandated by the government for three generations. In the U.S., they were implemented but not fully mandated. The implications for the church are different for each country.”

Creating space for witness and healing

Each day of the Vancouver event opened with morning prayers. In forums and listening spaces, survivors engaged with one another, provided statements of their experiences and shared ideas about how to turn reconciliation into action for generations to come.

Erica Littlewolf, Indigenous Vision Center coordinator for Mennonite Central Committee Central States, said she heard numerous first-hand stories of the abuse and its intergenerational effects. “To be in the presence of such courage, healing and will to survive is to witness greatness. I have internalized a great responsibility to respect those stories, to continue learning from them, to apply my knowledge and to commit to my own healing.”

Iris de León-Hartshorn reflected on listening to survivors on the first day of the hearings. “To hear the ‘Grannies’ speak was inspirational,” she said. “Even though they had experienced such hardship and abuse, they spoke in a way that exhibited love.”

Participants also attended discussions on the importance of memories and the role the arts can play in healing.

“We were honored to be witnesses to the stories told, the tears that fell and the righteous anger expressed,” de León-Hartshorn said. “We were deeply moved by the stories and responses as deep hurt, shame and lament were shared around the talking circle between the Christian church and survivors of residential schools.”

Ultimately, the journey of healing is both international and personal, Littlewolf said. “If we are to heal collectively, we need to recognize that we need healing in ourselves and that the institutions and systems we are in also need healing. Healing isn't for other people; it is for all of us. It is a choice that we have to embrace and work toward together.”

Heinrichs, who has attended most of the TRC events, said, “The formal part of the TRC is over. But the healing has just begun.”

Who is blind? (sermon)