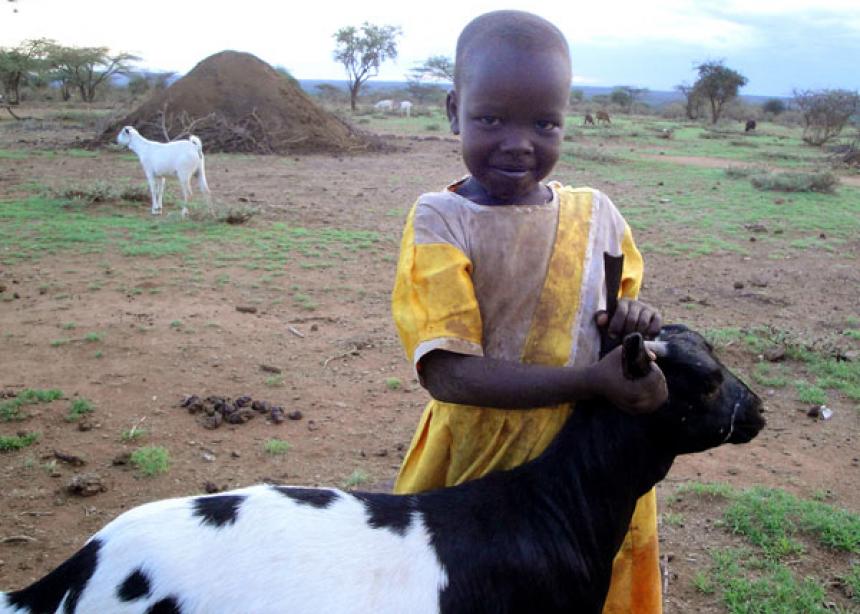 Toyia Sekento, six, holds a goat that her family is raising. Her family received the goat because her father is part of a self-help group in Kenya that is supported by Mennonite Central Committee. The goats are an incentive for the formation of 60 self-help groups among the Maasai people that each work together to do community projects.

A goat project among Kenya’s Maasai people is giving birth to more than baby goats. It is powering to life a cooperative group ethic that is helping 2,000 Maasai families cope with cultural change and ecological challenges.

The  traditionally pastoralist Maasai have struggled for years to redefine themselves in light of reduced grazing land, pressure to abandon their nomadic way of life and increasingly unpredictable weather patterns. The Maasai warrior able to fend off lions menacing his herd, long the centrepiece of Kenyan cultural pride, is a fading icon.

The Kenyan government has been encouraging the tribe to take up crop agriculture. In 2008, it granted farmland in the Osupuko highlands outside of Nairobi to 200 Maasai families. Most knew little about farming. Worse, they moved onto the land during a three-year drought, which made farming impossible and killed almost 80 percent of the community’s livestock, its major asset.

The Kajiado Goat Restocking Project, funded by Mennonite Central Committee (MCC) and the Canadian Foodgrains Bank, is helping them to replenish their livestock, learn to farm and live in a community.

Living communally raises problems the Maasai didn’t have to face when their lifestyle was nomadic. The goats, provided to project participants, are an incentive to encourage working together for the benefit of their communities.

Before group members could receive the goats, the partners required them to plan and implement their own activities, such as repairing community roads or caring for group farms. After the projects were complete, each member was eligible to receive up to five goats.

The group helps to pay for the goats using a graduated fee system. By the end of the restocking project, group leaders will assume procurement responsibilities, independent of outside help.

One of the first groups to become eligible for goats was Osupuko Matonyok (a Maasai phrase meaning “let’s work hard”) Organization, which began as a Foodgrains Bank food-for-work group in 2009 in the midst of the drought. The 120 families who live in the Osupuko highlands continued to work together after the food-for-work effort ended.

Having already tilled one another’s land and built community pit latrines, each member now has received two female goats, many of which have since produced kids. The Maasai value goats because they reproduce quickly, are easily sold, handle drought much better than do cattle and provide milk for the families involved.

Beyond celebrating their new goats, community members are seeing other benefits of the group effort. Through the training provided by MCC’s partners, members learned skills to grow crops and then helped each other on their farms, which increased the production of maize.

Throughout the region other groups are also acting. Reuben Pareyio, restocking project manager for the Maasai Food Security and Development Program, is seeing many groups implement similar projects. “In the community now, some people who are not in the groups have seen these self-help groups and they have been motivated,” he says. “Group members also have seen that there is power in the group, a lot of strength, so when many people come together many things can be done.” 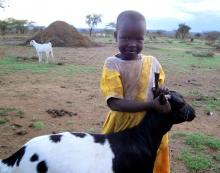 Toyia Sekento, six, holds a goat that her family is raising. Her family received the goat because her father is part of a self-help group in Kenya that is supported by Mennonite Central Committee. The goats are an incentive for the formation of 60 self-help groups among the Maasai people that each work together to do community projects.