From Africa to Saskatchewan

January 28, 2015 | God at work in the Church | Number 3
Story and Photo by Donna Schulz | Saskatchewan Correspondent 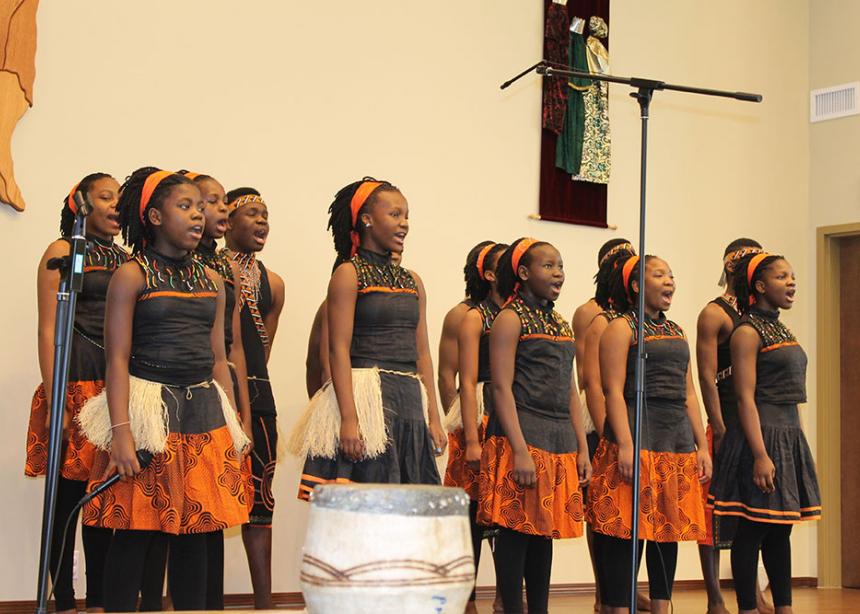 The Asante Children’s Choir sings with feeling “He Knows my Name” during a recent performance at Eigenheim Mennonite Church.

Enthusiastic singing, energetic danc-ing and electrifying drumming set the tone as the Asante Children’s Choir worshipped African-style with Eigenheim Mennonite Church congregants, near Rosthern, Sask. on Jan. 18. Although not their typical Sunday fare, the congregation responded warmly to the choir’s music.

The 15 singers, ranging in age from 12 to 16, have been touring western Canada since last September, broadening their own horizons as well as those of their Canadian audiences.

Allan Friesen, Eigenheim’s pastor, said having the choir come to his church was a great opportunity for the congregation, and particularly the youth, “to be exposed to [expressions] of Christian faith from another part of the world without having to leave home,” adding, “We’re so small and isolated in this part of the world and we don’t always get a sense of how big the Christian church is worldwide.”

Amon Munyaneza, a college student with $30 to his name, founded Asante Ministries in Rwanda in 1999. Munyaneza, who grew up as a Rwandan refugee in Uganda, met 10-year-old Naomi, who was caring for her dying mother. Munyaneza used his $30 to buy books so he could teach Naomi to read. When his friends heard what he was doing, they asked if they could help, and his ministry began to grow.

Today, through a child sponsorship model, Asante Ministries cares for about 1,200 children whose lives have been impacted by war, disaster and disease in the Eastern African countries of Rwanda, Uganda and Burundi. Sponsored children are given a home, healthcare, education and love, and they learn about the God who loves them and knows each of them by name.

In 2007, Munyaneza and his wife Erica founded the Asante Children’s Choir as a way to thank North American Christians who have sponsored children through their ministry. “Asante” is a Swahili word meaning “thank you.”

The choir that visited Eigenheim Mennonite is one of several touring groups. Each choir member is sponsored through Asante, “so they all know what it is like to be in need, and the amazing way that child sponsorship has changed their lives,” said tour coordinator Karen Klippenstein of Winnipeg. Through their singing, dancing and testimonies, the children raise awareness of the needs of children like themselves who don’t as yet have sponsors.

Travelling and living together for five-and-a-half months is challenging for choir members and chaperones alike.

“Every single one of us has [a] different mood, especially in the morning, so you have to be careful what you say or how you [perceive] their actions and words,” said Ugandan chaperone Simon Ssemwogerere.

But through the inevitable challenges, relationships grow. Findley, a female choir member, said, “On this tour I have made friends and discovered the true meaning of love and friendship.”

The choir is scheduled to return to Uganda later this month with many sto-ries to tell their friends and families. The cold Canadian winter has, understandably, made an impression on each of them, and some, like Kennedy and Patience, look forward to telling friends at home that they “walked on water” across a frozen lake. Others, such as Hellen, Mary, James and Findley, will remember the people they met. “Canadians are loving and beautiful people,” said Findley

“Coming to Canada is such an amazing experience for each child,” said Klippenstein. “Not only do they get to travel, but they get to experience another country and culture, learning so many things that they are only told about in school.”

And the children have embraced the experience to the fullest. “We tried every food,” said Grace. “And the coldness, even if it was -40 we went out and played and we did everything with enthusiasm.”

For the congregants of Eigenheim Mennonite, who worshipped with the choir and met them only briefly, the enthusiasm was palpable. On the church’s Facebook page, one member wrote, “I was definitely blessed by their songs, their smiles, their testimonies and their incredible energy!”

The Asante Children’s Choir sings with feeling “He Knows my Name” during a recent performance at Eigenheim Mennonite Church.

Hellen shares “What Jesus means to me,” as part of the worship service led by the Asante Children’s Choir at Eigenheim Mennonite Church on Jan.18.

The Asante Children’s Choir brings a little bit of Africa with them as they perform during the Sunday morning worship hour at Eigenheim Mennonite Church recently.

With confidence this young member of Asante Children’s Choir drums as his female counterparts perform a traditional African dance.