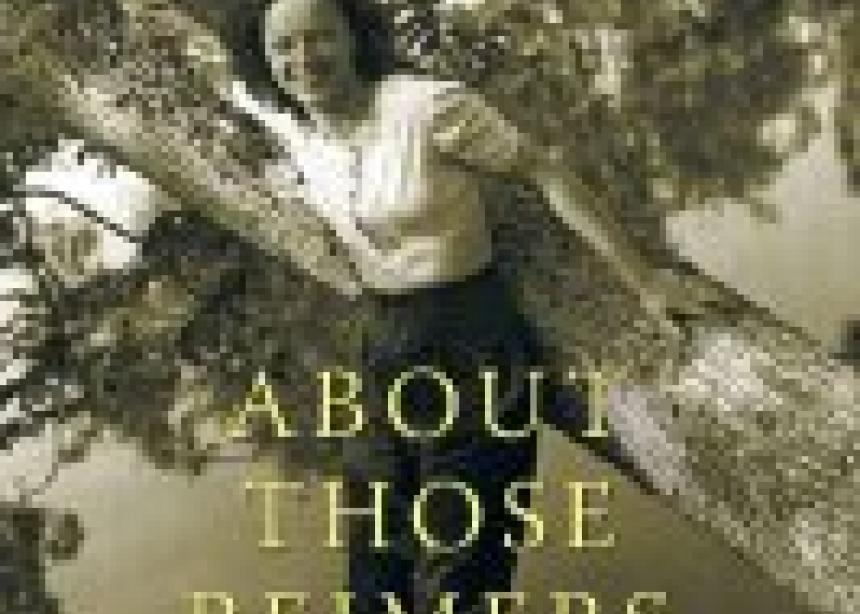 About Those Reimers vividly demonstrates how much of one’s life is determined by factors outside one’s control. Elizabeth Reimer Bartel begins her memoir, not with her birth, but with the Mennonites, their movements, and a view of the city of Steinbach in the East Reserve of Manitoba, where a group of them settled in the 1870s.

It was here that she was born, in 1925, into the large, talented, and sometimes contentious H.W. Reimer clan, who happened to own a prosperous Steinbach general store. A religious identity, a unique place, the dynamics and decisions of a particular family—these are the givens within which Elizabeth’s life unfolds.

When she is six, her father leaves the H.W. Reimer family enterprise, the only one of the siblings to do so. He moves his family to Sperling, some 80 miles away. They next live in Winnipeg for some years, struggling financially while inheritance issues in the extended family remain unresolved, and then go back to Sperling. In 1939, Elizabeth returns to Steinbach to attend school, feeling “like a princess come to claim her coronet.” Her family eventually re-settles in Steinbach as well, though with an interlude in Hamilton, Ont. The memoir takes us up to Elizabeth’s marriage during World War II and the couple’s early years together.

The author provides insights into tensions in the extended Reimer family—their “continuing saga” —and glimpses too of the theological “hairsplitting” that seems to beset the Mennonites at every turn. Since she writes through the lens of her memory, however, matters concerning conflicts that left the H.W. Reimer family fortune “in tatters” remain somewhat vague, lost in what she calls “the mysteries of adulthood.” I found myself wishing for the precision that research into legal and church records might have provided.

What the author does so wonderfully in this memoir, however, both in the narrative and in interspersed poems, is evoke (with quite astonishing detail) the sounds and sights and smells of places and times, such as the “fairyland” of her grandfather’s store or the ambience of “English” Sperling. She has the gift of penetrating description, speaking, for example, of “the rude vigour” that prevailed among the Reimers, her uncle “plump as a toy bear,” and God—for the Mennonites—not soft “but hard/like a theorem in geometry.”

It is this appealing voice that turns the pages of this memoir. It reveals heritage for the mixed blessing and burden it is. It also reveals Elizabeth Reimer Bartel’s lively personality—her uniqueness as an individual within her heritage, and also apart from it.

Hi Elizabeth, I think we are probably related. I too was born in Steinbach though later than you - 1947. My dad Alfred Friesen Reimer owned the Brookside Hatchery and later became general manager of the eastern division of Reimer Express Lines.
I am also an "emerging author" in Victoria. I could not make the ceremony because I was away at our primary home in Edmonton. My book is called Sunny Side of a Rainy Life by Elizabeth Morgan. Would love to catch up with you some time. My husband and I laugh at your title About Those Reimers. My five brothers and dad had/have what you call "rude vigour". I look forward to reading your books and meeting you if you have an interest. Liz ;-)

Looking forward to reading this! I'm from a West Reserve Reimer family, but remember being entranced with Steinbach as a little girl in the early 1980s. :)