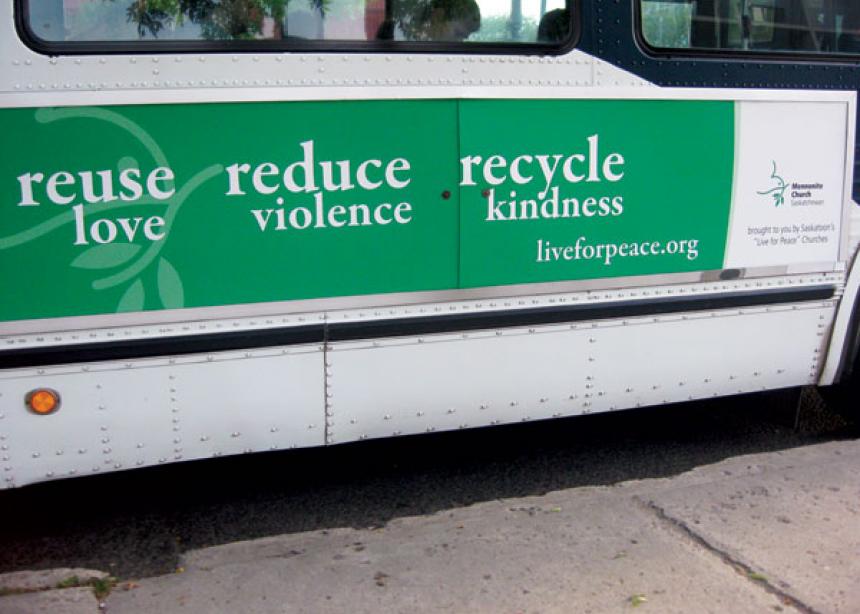 During the Mennonite Church Canada assembly in Saskatoon in 2009, the discussion about taking a public stand for peace received a sound workout and the challenge to live out a thousand acts of peace was put to the delegates to consider.

As is the case with some Mennonite churches, it takes times to work new ideas through the ranks, but in the summer of 2010 MC Saskatchewan was preparing to launch a large-scale blitz of bus board signs proclaiming that peace is worth a look.

Stephanie Epp, chair of the MC Saskatchewan Peace and Justice Committee, reports that each of the churches involved was encouraged to contribute whatever it could. More than $4,000 came in, enough to pay for a large ad across one side of five Saskatoon city buses.

The committee found the local transit company easy to work with, but when the ads first appeared last fall Epp noticed something troubling. “There was an installation error on one of the buses,” she says, explaining that the committee had been told that its peace ad would be the only one on the side of the bus. However, there was a second ad above it.

The competing ad did not negate the peace message, but it was a distraction. In response, the bus company offered to continue the campaign beyond the originally agreed-upon timeline.

Of the seven churches that pledged support, two were outside the city.

And since many members of their congregation regularly do business in the city, the small church decided it was right to sacrifice part of its annual church budget for the city bus ads.

Pauline Steinmann, pastor of Wildwood Mennonite in Saskatoon, noticed renewed curiosity in her congregants as a result of their involvement. “It certainly created some interest in terms of our whole peace stance,” she affirms. “We’re hearing conversations around the topic of, ‘What do we really believe in terms of a public stance?’ ”

Wildwood also chose to put an ad in its community newsletter to notify the neighbourhood of the church’s ownership in the campaign, using the same logo in the ad as the bus boards to create a connecting point.

Nutana Park Mennonite, a larger urban church, also chose to be involved. An e-mail from co-pastor Anita Retzlaff reflects a positive experience through all of it: “The process of discernment for our board of deacons was a valuable exercise to go through as we contemplated this project.”

Will MC Saskatchewan run the ads again, perhaps on an annual basis?

“There is no firm decision,” says Epp, noting that the ads are in storage, so if it is done again there will be no need to pay for production costs, only the advertising costs.

At any rate, it appears the public was watching, at least by those who take the bus. MC Canada reports that the number of visitors to its liveforpeace.org website, which was printed on the bus ads, rose significantly during the campaign. “There was a 45 percent increase in site activity originating in Saskatoon over the course of the ad campaign,” notes Dan Dyck, director of communications.

And it appears that Saskatchewan Mennonites were thinking. “Within the churches, there were more conversations around peace and peace issues. . . . That made it a very successful campaign,” says Epp. 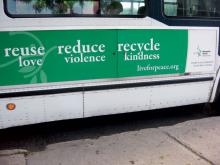