Matt Falk says, ‘Vulgarity is no substitute for wit’ 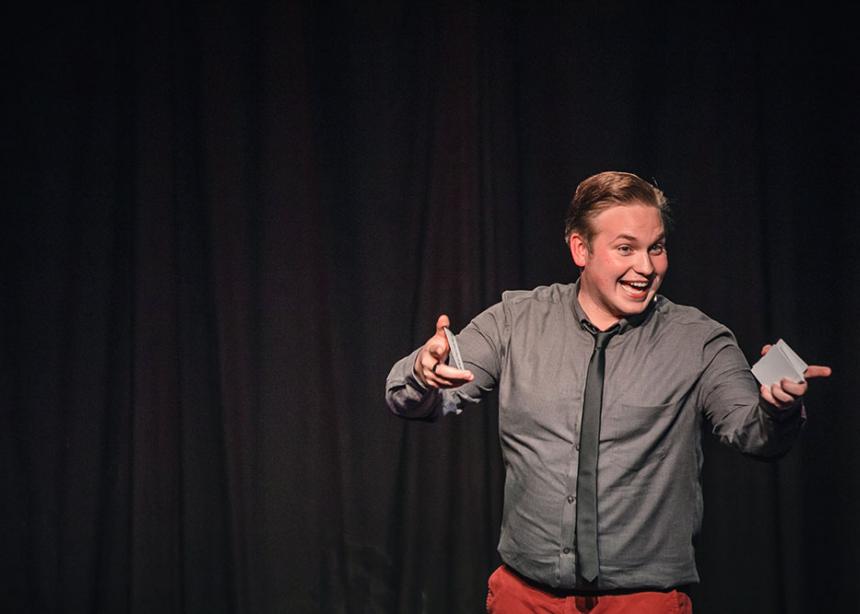 Matt Falk recalls one of his worst gigs from the beginning of his career as a comedian. He was hired to perform at a corporate event, and during his 30-minute set the audience barely chuckled.

The people in the club mostly just stared at Falk and talked among themselves. At the end, he wished the crowd a good night and began making his way to the exit. The emcee grabbed the microphone and made Falk the butt of his next few jokes, saying, “Well, you can’t win ’em all.” The audience erupted with laughter.

Falk no longer bombs the way he did that night, and in the years since he has established a promising career that, along with stand-up appearances at comedy clubs, theatres and churches, has included acting on television and writing popular dinner theatre shows.

In 2010, he placed second out of 285 contestants in the World Series of Comedy in Las Vegas, netting him 16 weeks of work across the U.S. His debut album, Apple Pie & Scars, debuted at No. 1 on the iTunes comedy chart upon its release at the end of 2012, and TheSeriousComedySite.com listed it as one of the Top 10 Comedy Albums of 2013, alongside the latest release by the legendary Bill Cosby. The CBC has described Falk as “effortlessly funny,” and renowned Canadian comedian Ron James once called him “a genius child.”

“There are days when I have to pinch myself,” Falk says. “Like, ‘This is what I do for a living? This is how I make money?’ This is exactly what I want to do. This is my dream job.”

Not bad for a 24-year-old of Russian Mennonite descent whose upbringing and faith in Jesus Christ inform the way he conducts himself on and off the stage.

Born in April 1989 and raised in Niverville, Man., 30 kilometres south of Winnipeg, Falk started entertaining audiences when he was 15 by performing magic at children’s birthday parties. Two years later, he started doing stand-up at school talent shows and local fairs, cracking jokes about puberty, his hometown and his family.

Falk fell in love with comedy at an early age, watching comedians like Ellen DeGeneres and Robin Williams on TV. Their hilarity captivated him. “I just wanted to be like them so badly, so I think that’s what motivated me to get into [comedy],” he says by phone from the Niverville home he shares with his wife Sabrina.

Falk likens his early forays into comedy to playing, the way a child might see a doctor and pretend to be a doctor during playtime. “I dreamed of being [a comedian] and that dream never left me. I just kept playing, as it were.”

His salesman father and his mother, who runs a daycare, were both supportive, driving him to performances. Faith was always important to the family, and Falk was baptized as a teenager at Niverville Mennonite Church, now known as Niverville Community Fellowship.

By his late teens, Falk was appearing at Rumor’s Comedy Club in Winnipeg, and in 2008 he became the youngest comic in history to headline at the club.

After placing second in the World Series of Comedy, Falk and his wife relocated to Abbotsford, B.C., for six months, and then to Toronto for two years, to pursue career opportunities and make industry connections in larger centres. In the past four years, he has written for and acted on RocKids TV, a Bible-based television series for children aged 4 to 10; filmed a pilot for Crossroads Television System called Summer Camp; written or co-written three popular shows at Winnipeg’s Celebrations Dinner Theatre; filmed a web series called Out in the Cold; and toured throughout the country.

“Every year we get more and more bookings, every year it grows, and that’s incredibly exciting,” Falk says, adding that he headlined in Ottawa for the first time last year. “The number of gigs is increasing, but so is the quality of gigs.”

Part of what makes Falk accessible to—and popular with—a wide range of audiences is that his act is 100 percent clean, meaning it is free of vulgar material.

This approach to comedy is informed by his faith. He references James 3:12: “Neither can a salt spring produce fresh water.” For Falk, who sees his comedy career as a ministry, saying filthy jokes on stage and then trying to tell people about Jesus in the same breath just wouldn’t work.

“It doesn’t make sense for my stage character to be swearing or cursing,” he says. “I don’t do it in my everyday life, so it doesn’t make sense to write like that. I feel I’m a better representation of Christ when I choose my words wisely and I’m not making people feel uncomfortable.”

While writing clean is a challenge, it’s also fun, he says. Sometimes when writing, he knows adding a swear to a bit would get a laugh in a comedy club, so the challenge becomes figuring out how he can get a laugh without using the swear.

“Vulgarity is no substitute for wit,” he says. “If you can come up with a way to present the joke without swearing, then you spent the time and put the effort in to craft a better joke.”

Falk is currently working on a new hour of material that he hopes to record this year and release in both CD and DVD formats. In late March, he will perform throughout southern Ontario as part of The Circuit, a clean comedy tour sponsored by World Vision Canada. On April 11, 2014, another one of Falk’s dreams will come true when he appears at the popular Winnipeg Comedy Festival, and he will spend the last two weeks of April in Ottawa performing a number of shows at the Absolute Comedy Club.

“Other than my wife, my backing is Christ,” Falk says. “He’s been the one who’s given us all the favours and opened all the doors, and brought us to the place we are now. We ask questions and we listen, and we move forward to what we believe he is leading us toward.”

Canadian Mennonite's "Focus on Funny" (March 17, 2014 issue) includes this feature and Laughter is Sacred Space. For reflection and group discussion, go to the discussion questions related to these two articles.

What’s so funny?
Being Mennonite 101 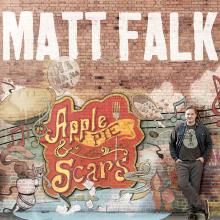 Comedian Matt Falk draws from his Russian Mennonite heritage for some of the material in his act. ‘For those who don’t know what a Mennonite is, a Mennonite is basically just like a Catholic, with half the dancing and twice the guilt,’ he quips on his debut album, Apple Pie & Scars. (Photo by Cody Goetz)

My name is Tom Sawyer (no joke). As a Christian, and aspiring comedian, I have to tell you that your style and material truly inspire me.

I, before I came to the saving faith in Jesus Christ, used to perform stand-up comedy, which was in no way considered “audience-friendly”, as I would regularly require alcohol to allow me to “loosen up”. Therefore, it was near impossible to control my mouth.

When I became a Christian in 1991, I still had the desire to do stand-up, but I’ve only been turned onto a few clean comics. Let me say to you that your material is 100% TOP NOTCH.

I saw on your website that you’ll be performing in Whitestown, IN (Indianapolis-ish) in January 2020. I hope my wife and I get a chance to see your show, and hopefully get a chance to meet you.

God’s blessings to you and your family.