‘It Takes Raindrops to Fill a Lake’ 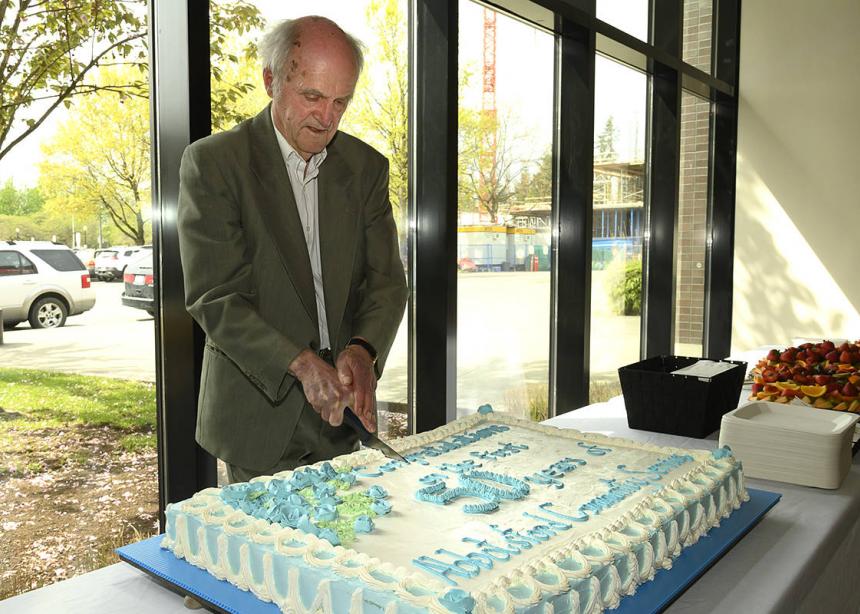 Walter Paetkau cuts the cake celebrating the release of his book 'It Takes Raindrops to Fill a Lake' at the Reach Gallery Museum in Abbotsford. (The Abbotsford News photo by Dale Klippenstein)

From humble beginnings in a two-room office, today ACS is now the largest community services organization in the province, with 90 programs fostering community well-being and social justice that encompass employment services, legal advocacy, drug and addiction counselling, youth and senior programs, a food bank and much more.

Paetkau, who served as executive director of the organization from its founding in 1969 until 2000, has just written It Takes Raindrops to Fill a Lake, a book on the history of ACS.

Social justice issues were always important to him. In the 1960s, he became involved in the U.S. civil rights movement. He attended Mennonite Biblical Seminary in Elkhart, Ind. and was an exchange student at an African-American seminary in Atlanta, the only white student there. He worked for the then General Conference Mennonite Board of Christian Service in Newton, Kan., for two years in the mid-1960s, and then continued working in service development for the conference in Abbotsford.

Paetkau says the book came about through talking with colleagues and reminiscing four or five years ago. He met with the current ACS executive director Rod Santiago to discuss the project and then the board approved it. Paetkau then combed through stacks of scrapbooks and other archival items as he researched the book.

“I did a lot of interviewing, talked to a lot of people, and read through a lot of minutes kept over the years,” he says.

After his retirement from ACS, Paetkau volunteered with the Circle F Horse Rescue Society, but now is concentrating on promoting the book and continuing to garden at the home he and his wife Mabel have shared for 50 years.

In 2017, he received an award from the British Columbia Achievement Foundation for his role in founding ACS.

Walter Paetkau cuts the cake celebrating the release of his book 'It Takes Raindrops to Fill a Lake' at the Reach Gallery Museum in Abbotsford. (The Abbotsford News photo by Dale Klippenstein)